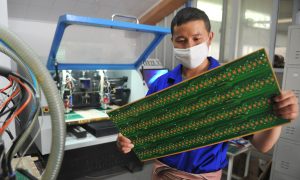 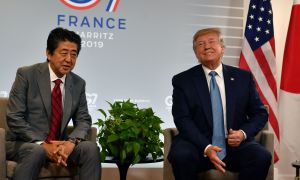 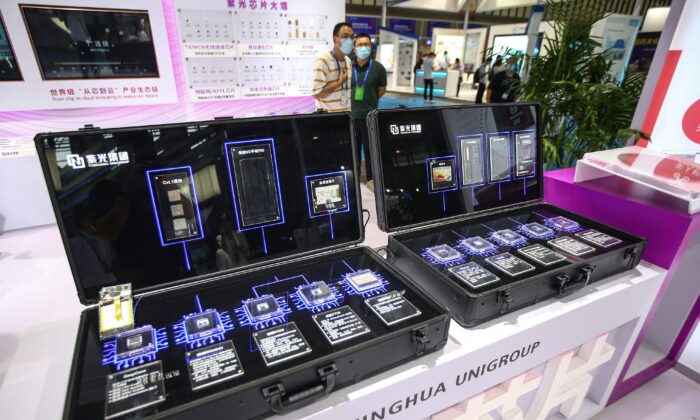 Chips by Tsinghua Unigroup are seen at the 2020 World Semiconductor Conference in Nanjing in China's eastern Jiangsu Province on Aug. 26, 2020. (STR/AFP via Getty Images)
Thinking About China

But while chipmaking businesses have suddenly blossomed across the country, what often follows are industry scandals and other bad news.

Fabs have reportedly sprung up in mainland China in recent years, with local governments attempting to attract businesses and investors with dividends of land. Almost every province has started chip projects, especially in second-tier cities.

As of the end of 2019, there were a total of 63 projects related to China’s wafer production lines, including 31 projects put into production, 26 that were under construction or in the planning phase, and six others that have been suspended, according to a Jan. 4 report by ChipInsights.

Since then, public information shows that no fewer than six highly anticipated projects have failed, including Wuhan Hongxin Semiconductor Manufacturing Co. (HSMC), which was listed as “under construction” by the report.

Established at the end of 2017, HSMC was highly valued by local officials and was selected as a major project in Hubei Province in both 2018 and 2019. Until April, HSMC was still ranked first, with a total investment of 128 billion yuan ($18.9 billion) in the “Wuhan City-level Major Projects Under Construction in 2020” issued by the Wuhan Municipal Development and Reform Commission.

In July, however, the Dongxihu district government of Wuhan issued a report stating that HSMC “has a large funding gap and faces the risk of project stagnation due to a break in the capital chain at any time.”

On Aug. 28, local authorities announced the HSMC project was suspended for lack of funds.

While HSMC has gained tremendous capital with zero credentials and production, a major concern is that the same tactics can be applied throughout China to obtain illegal gains. However, Cao Shan, who registered and established Beijing GLTC, in January 2019 registered and established Jinan Quanxin Integrated Circuit Manufacturing (QXIC). The investment in Jinan QXIC from two local state-owned shareholders has reached as much as 59.8 billion yuan ($8.8 billion).

Meanwhile, the “China chip,” or Hanxin No. 1, was a setback that became known as the Hanxin scandal. The fraud was exposed in January 2006 and tarnished the image of the country’s science and technology industry.

Hanxin No. 1 was a duplicate of a chip developed in the West, with the original trademark sanded away. The developer, Chen Jin of Shanghai’s prestigious Jiaotong University, didn’t face criminal charges and was fired from the university in 2006. Sohu reported in March 2019 that Chen was working in the multimedia processor industry.

Many reports at that time showed that more than 100 million yuan ($12.5 million) of government funds were invested in Hanxin’s fake chips. Others involved in the case included senior administrators at Jiaotong University, local authorities in Shanghai, and experts from the Chinese Academy of Sciences.

In the past 20 years, scams in the domestic chip industry have emerged one after another, and they have much in common with the Hanxin scandal. In other words, this is an old-fashioned scam, and the biggest “cooperator” usually colludes with the local government.

In Jiangsu Province, for example, Huai’an, a small city with the province’s third-lowest gross domestic product, has also joined the chipmaking force. Although Huai’an likely can’t afford to manufacture chips, it can secure funding from the government.

Are local governments put at high risk? Who pays for the tens of billions in funds that are easily wasted on unfinished projects? How will the government settle the vast job losses in the chip industry?

These are bombshells that could explode simultaneously in China. The chip market is likely to trigger civil unrest for the authorities in Beijing.

Simin Chen is a freelance writer who has contributed to The Epoch Times since 2011.