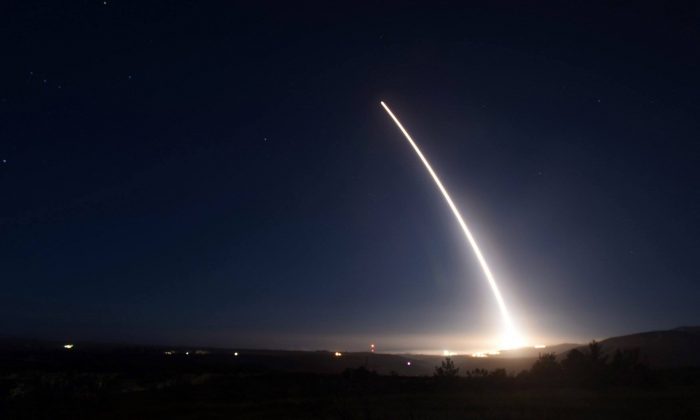 The Chinese Communist Party (CCP) is engaged in a massive deception operation to move the United States to commit much of its defense budget to acquiring a new, nuclear-tipped intercontinental ballistic missile (ICBM) system at a time when Beijing has moved to far more powerful hypersonic strategic weapons.

Beijing has attempted to play down the relatively successful test in August of its new globe-circling, orbital hypersonic delivery system for nuclear weapons, out of concern that Washington may reorient its defense research and spending to counter or match the capability. The CCP would rather see the United States continue to concentrate its limited funding on developing a new version of “yesterday’s technology,” the ICBM replacement for the U.S. Air Force Minuteman III system.

Even by mid-2020, the budget for this program had reached $95.8 billion, part of a comprehensive replacement of the U.S. nuclear force, estimated to cost more than $1.2 trillion. This comes as the efficacy of nuclear weapons is already in doubt because of the greater cost-effectiveness of other strategic systems, such as cyber warfare and hypersonic weapons (which need not be nuclear-tipped).

It would greatly suit the CCP if the United States continued to make strategic ballistic missiles and aircraft-delivered nuclear weapons the central theme of its strategic deterrence and offensive posture.

The CCP had, earlier in 2021, used its influence to see significant U.S. analytical attention diverted to concern over the alleged construction—beginning in 2020—of three new fields of fixed ICBM silos for the People’s Liberation Army (PLA) Rocket Force, suggesting that hundreds of new launch sites were being prepared in north-central mainland China. With deceptive coyness, Beijing denied that it was building the silos, knowing that all satellite reconnaissance of the area showed the definitive pattern of such construction.

The ICBM silo construction sites near Yumen, Hami, and Ordos in China, all “discovered” by U.S. analysts between June and August, are probably deceptions or “Potemkin silos,” according to the Washington-based International Strategic Studies Association (ISSA).

The United States is lagging behind China and the Russian Federation in the development of deployable hypersonic weapons, especially those in the space-related, ultra-long-range arena. The new U.S. hypersonic weapons programs appear to be favoring air-breathing systems, which, by definition, don’t rely on entry into a low-Earth orbit trajectory, which the PLA seemed to demonstrate in August.

Significantly, the concept and capability to develop an orbital weapon isn’t new. The Fractional Orbital Bombardment System (FOBS) was demonstrated by the Soviet Union in the 1960s, with the system essentially skipping into and out of a polar orbit to deliver its nuclear payload. The USSR had built and tested its R-36O FOBS from about 1965 to 1971, giving it a weapon of virtually unlimited range and maneuverability.

The USSR began dismantling its R-36O systems and their silos in 1982, and the United States never responded to the threat with either countermeasures or competitive systems. The end of the Cold War a few years later made the matter moot.

Now the People’s Republic of China (PRC) has picked up the concept, and its first demonstration was fairly successful, returning the weapon before landing within 25 miles of its intended target.

What has been significant, however, is that the PRC’s apparent desire to force the United States to continue with old-style nuclear weapons has been given significant credibility by the organizations that were key to the USSR’s psycho-political warfare campaign of the 1980s to stop President Ronald Reagan’s Strategic Defense Initiative (SDI).

The U.S.-based Federation of American Scientists (FAS) and the Bulletin of the Atomic Scientists (BAS), both left-leaning organizations, were induced to attack the Reagan SDI program on the basis that it was technologically infeasible and was, in any event, likely to undo the strategic nuclear balance between the United States and the USSR. Both allegations were proven to be untrue.

SDI caused the USSR to abandon its strategic competition with the United States, ultimately leading to the collapse of the Soviet Union. And SDI was subsequently seen to have been completely feasible under the concept parameters of America’s then leading strategic philosopher, Stefan Possony.

It may or may not be coincidental that the FAS and BAS have been active in generating U.S. concern over the PRC’s alleged new ICBM silos, just as FAS and BAS threw their weight behind the drive to stop SDI. But it does seem clear that Beijing has been anxious for Washington to focus on this “old-style” nuclear threat, rather than on competing with and countering the PRC’s FOBS weapons development.

ICBMs—as Reagan’s and Possony’s SDI proved—are predictable in their flight paths and are today relatively straightforward to destroy, particularly if low-cost, space-based energy weapons are used against them. Orbital hypersonic weapons, with or without nuclear warheads, are more complex threats. And Beijing is keen to cement its strategic weapons dominance over the United States before the PRC runs out of cash.

It wants a checkmate weapon.