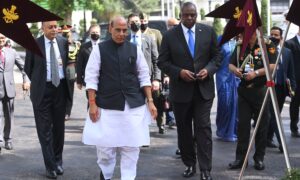 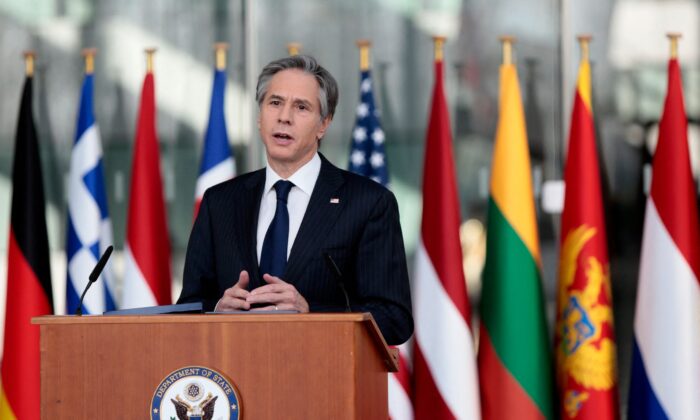 The Beijing regime’s “blatant economic coercion” against Australia is one of the three most urgent threats facing the world, U.S. Secretary of State Antony Blinken says.

Speaking at NATO headquarters in Belgium on March 24, he noted that the Chinese Communist Party (CCP) poses a growing military and non-military threat that can no longer be ignored.

“Beijing’s military ambitions are growing by the year,” Blinken said, outlining the first major threat. “Coupled with the realities of modern technology, the challenges that once seemed half a world away are no longer remote.

“There’s no question that Beijing’s coercive behavior threatens our collective security and prosperity and that it is actively working to undercut the rules of the international system and the values we and our allies share,” he said, outlining the second major threat.

He offered the example of “China’s blatant economic coercion of Australia” as an aggressive nonmilitary action that he says threatens “not only our individual countries but also our shared values.”

Blinken noted that China and Russia are complicit in these kinds of activities, which focus on utilizing technological, economic, and informational tactics, and pointed to actors spreading disinformation and weaponizing corruption to fuel distrust in our democracies.

His comments come after a year of the regime in Beijing retaliating against Australia with economic sanctions, and rhetoric after Australian Foreign Minister Marise Payne called for an independent inquiry into the origins of the CCP virus, commonly known as novel coronavirus.

Since then, at least eight Australian export product categories have been banned by Beijing, including coal, barley, lobster, cotton, timber, beef, lamb, and wine.

“As the COVID-19 pandemic has made abundantly clear, our health security is intertwined, and only as strong as our weakest link,” Blinken said.

He noted that on the threats posed by the virus, no one country is to blame, although the United States has previously said that Beijing bears responsibility for failing to contain the CCP virus within its borders. Former U.S. Secretary of State Mike Pompeo specifically criticized the Chinese regime for allowing international flights to leave Wuhan early in the outbreak, including to the United States.

Further, research has shown that the spread of the CCP virus to other countries could have been greatly reduced had the Chinese regime not withheld or suppressed vital information in the early days of the outbreak.

US Alliances Key to Stability

Blinken’s policy speech allowed the new U.S. secretary of state to focus on America’s alliances, outlining what allies might expect from the United States and what the Biden–Harris administration expects in return.

Blinken noted that although the threat landscape has changed since many alliances were formed, those alliances are needed now more than ever.

“The world looks very different than it did decades ago, when we forged many of our alliances—or even than it did four years ago,” he said. “Threats have multiplied. Competition has stiffened. Power dynamics have shifted. Trust in our alliances has been shaken—trust in each other and trust in the strength of our commitments.

“Yet none of this changes the fact that we need alliances—now as much and maybe even more than ever. The challenge we face is to adapt and renew those alliances so that they can meet today’s threats, and continue to deliver for our people now, as they have in the past,” he said.

Alliances and partnerships have value because the more that countries with complementary strengths and capacities can unite to achieve shared goals, the better, Blinken said.

“That’s the idea behind the group of countries we call “the Quad”—Australia, India, Japan, and the United States,” he said. “We share a vision of a free, open, inclusive, and healthy Indo-Pacific region, unconstrained by coercion and anchored by democratic values. We make a good team. And our cooperation will strengthen parallel efforts to ensure security in the East and South China seas and to expand safe, affordable, and effective vaccine production and equitable access.”

He also noted that the Biden–Harris administration would respect differences of opinion on China among allies.

“The United States won’t force our allies into an ‘us or them’ choice with China,” Blinken said.

“We need to navigate these challenges together,” he said. “That means working with our allies to close the gaps in areas like technology and infrastructure, where Beijing is exploiting to exert coercive pressure. We’ll rely on innovation, not ultimatums.

“Because if we work together to make real our positive vision for the international order—if we stand up for the free and open system that we know provides the best conditions for human ingenuity, dignity, and connection—we’re confident that we can outcompete China or anyone else on any playing field.”