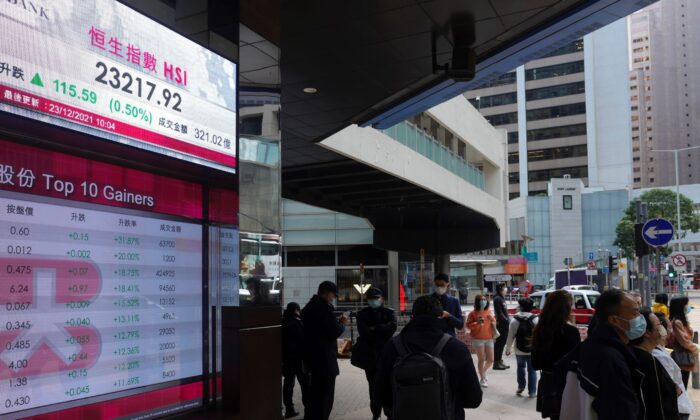 As the Beijing Winter Olympics get underway, all the world’s eyes are on China. But are the big financial players aware of what’s really going on that’s right before their eyes?

China Stocks Crash in US Markets

As tighter U.S. regulations came into force last year, weakness and fraud were revealed in many Chinese companies. As a result, we saw the crash of U.S.-listed China stocks in 2021.

Many stocks hit new lows and lost as much as 80 percent of their value—others even more. In fact, just the threat of more oversight made some Chinese companies decide to delist from U.S. stock exchanges altogether.

Looking for a Rebound?

Now, just a few weeks into the new year, the speculation among financial observers and investment banks is that after the crushing losses, a stock price comeback in 2022 is a reasonable possibility.

That’s typical. When stock prices fall so quickly, conventional financial thinking has investors assuming that assets have been oversold.

The investment bankers remain dazzled and hypnotized by the prospect of gaining more access to the China market and the profits that it would bring.

Not this time, and there are several reasons why.

For one, unlike financial institutions, the Chinese Communist Party (CCP) ultimately is not about making money. Yes, the Party is full of millionaires and billionaires, but that’s beside the point. The two are linked, but as Alibaba’s former owner Jack Ma and other tech moguls discovered, power trumps money.

With the first, you can always get the second. But it doesn’t always work so well the other way around.

The CCP’s national objective is to grow China’s power and project it around the world.

Furthermore, even when the CCP causes bubbles that eventually cause tremendous economic and social upheaval, the people who get hurt have no power and the Party has all of it, so there are no consequences for the CCP—so far.

The current real estate development crash tells this story well. The tens of millions of investors who lost their life savings are suffering, but the Party remains in power.

Hong Kong and Beijing: The Alternative to Wall Street

Moreover, the CCP no longer needs or cares if Chinese stocks perform well on Wall Street. With its takeover of Hong Kong, the Party now has the Hong Kong Stock Exchange, or more formally, the Hong Kong Exchanges and Clearing Limited (HKEx), for that.

As the third-largest exchange in the world and the government of Hong Kong as the largest stockholder, there is ample opportunity for Beijing to grow the exchange and increase its influence at the expense of Wall Street. Additionally, a new Beijing-based exchange will be established, creating a powerful center of gravity for global investment and finance.

In fact, by lowering secondary listing requirements, the Hong Kong exchange is attracting U.S. companies to list their stocks there. Furthermore, the CCP can dictate performance on the Hong Kong Exchange, as well as in the Shanghai and Shenzhen exchanges with capital and manipulation to boost its power and influence.

Normalcy Bias and the Rise of the Middle Kingdom

Meanwhile, global investment banks and Wall Street firms that are heavily invested in China insist that Chinese companies will regain their value on U.S. exchanges, but it doesn’t really matter.

Financial firms either don’t see what’s happening because they don’t want to, or are just going with the flow. They tend to view the changing world as a consequence of globalism. It is, but globalism isn’t the end for China—it is the means by which to put the Middle Kingdom back into its rightful place: global dominance.

The Chinese regime’s big plan is to replace U.S. hegemony with its own, and it’s happening at an astonishing rate. Diminishing, if not destroying, the world’s confidence in the U.S. stock market and the dollar is a big part of that plan.

Part of the execution of that plan likely involves a crash in the U.S. markets and Beijing shorting them to take billions, if not trillions, of dollars out of the U.S. economy virtually overnight.

The net effect would be a loss of world confidence and prestige for the United States.

How might this crash come about? How could the CCP trigger it?

An invasion of Taiwan may well do it, but there are other possibilities.

The Opportunity Is Now

The larger point is that the Chinese regime is now positioned to damage the United States in ways that other adversaries cannot, while providing the world an alternative.

The United States, on the other hand, is increasingly looking like a global economic power in decline.

Besides adding trillions of new debt in response to the pandemic, America’s wobbly commitment to Taiwan’s defense, the calamitous Afghanistan withdrawal, and the Ukraine crisis all diminish the world’s confidence in the United States and the dollar.

This emerging reality has terrible implications for the United States and for what remains of the free world.