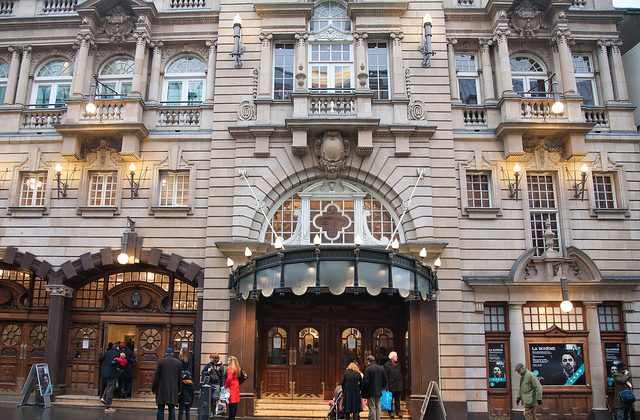 The London Coliseum is the largest theatre in London, with 2,359 seats. It was opened in 1904 and twelve years ago was completely refurbished and restored with money from institutions such as National Heritage Lottery Fund and English Heritage. It is the home of the English National Opera (ENO) and has hosted works by Wagner, Puccini and Tchaikovsky. The U.K. promoters of Shen Yun, a world-renowned Chinese performing arts company, say the Chinese Embassy in London has been pressurizing the theatre to stop Shen Yun performing in April. (Roger Luo/ Da Ji Yuan/The Epoch Times)
US

It is a buzzword increasingly associated with China. It even sounds like a mystical Kung Fu technique. But “soft power” is one move that the Chinese regime has yet to master in the international arena.

It is this pursuit of “soft power” that lies behind recent attempts to stop a performance of classical Chinese dance at a West End theatre in London, according to China expert Ethan Gutmann.

Due to perform in London in April, Shen Yun is a world-renowned Chinese performing arts company with a stated mission to revive China’s 5,000-year-old divinely inspired culture.

But the promoters say that the Chinese Embassy in London has been trying to derail the performances – with a potential total audience of around 10,000 – following a pattern seen globally over the last several years.

Ethan Gutmann, an expert and author on modern-day China now living in London, says the regime is envious of Shen Yun’s ability to set the terms on which Chinese culture is seen in the West.

Gutmann says: “The Chinese government does not play well with others. They want soft power but they are not good at soft power. They produce movie after movie, show after show, they’ve tried that, but somehow it never breaks through.”

Shen Yun on the other hand, says Gutmann, has been truly successful in laying out its own picture of China’s cultural heritage – one which does not chime with the agenda of the regime. “It is about presenting this moral point of view in a very elegant way, with beautiful costumes and sculpted dances and bringing people through Chinese history in a fun way. The Chinese government envies that, they want that – they’ve been looking for soft power for a long time.”

Increasingly over the last several years, the Communist Party’s thirst for soft power has come to the fore, with growing numbers of institutions being set up overseas in the name of promoting Chinese culture and language, with various performing arts groups also being sent to the West.

Through these institutions, some believe that the regime is pushing its own propaganda messages and whitewashing over the image of a communist dictatorship with a shocking human rights record. In some countries commentators and politicians have raised concerns over the proliferation of Confucius Institutes and how they contribute to the malevolent intentions of the regime in China.

Gutmann is a journalist, investigator, and author of Losing the New China: A Story of American Commerce, Desire and Betrayal, and has been described as a “mammoth sociological, political whistle-blower” by the US magazine the National Review.

He says he has seen Shen Yun every year for the last five years. “It’s glamorous. It lends itself to the big venues very well. As a show it has something for everyone. I took someone last year who has no experience with China – a young lady of about 15 – and she was crazy about it just for the costumes.”

Shen Yun is billed as the world’s premier classical Chinese dance company, with three performance companies touring simultaneously around the globe for five months every year. But the New York-based performing arts company wants to go further still. “The group will only continue to expand, and in the not-too-distant future, Shen Yun will have many companies touring around the world simultaneously,” says the introduction on the Shen Yun official website.

The promoters of Shen Yun in the UK, the Falun Dafa Association, say that the Chinese regime is frightened of Shen Yun reviving the traditional culture and beliefs that the Communist Party sought to destroy over the last 60 years. They too say that the communist regime cannot bear for anything to be done in the name of China that is not under its control.

The Association says that various UK Members of Parliament and Members of the European Parliament have expressed concern over the attempts to interfere with Shen Yun in London.

Next page …  MEP Gerard Batten told The Epoch Times that he was confident the London Coliseum would not give in to pressure from the Embassy and had written to encourage them.