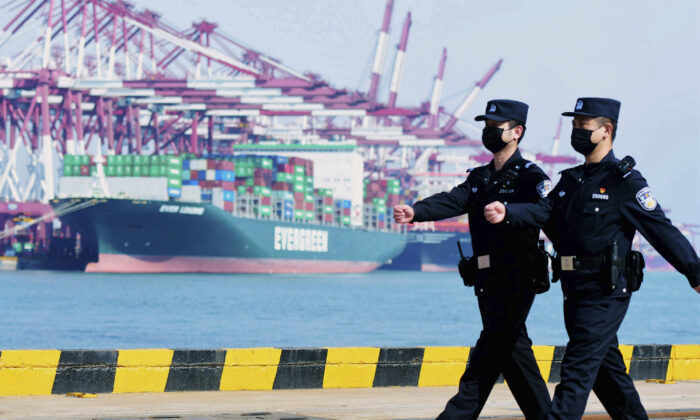 Police officers patrol at a container port in Qingdao in eastern China’s Shandong Province, China, on Feb. 19, 2020. (Chinatopix via AP)
Thinking About China

Because China’s economy has grown to a gigantic size, its top-down, command approach to economics, especially its trade policy, has destabilized and has begun to alienate several trading partners.

Those countries, smaller Asian nations especially, have only one rational response: put up with the economic ills imposed by Beijing while finding ways to disengage from China trade.

Although all countries manipulate trade policy to their own advantage, communist China has shown an especially ruthless and aggressive approach. In other countries, two considerations moderate such behavior. One is the risk of alienating important trading partners. Former President Donald Trump dared with China in the 2019 “trade war” because he and his team thought Beijing was already as hostile as it would likely become. China, in contrast, seems unconcerned about alienating others.

For most other countries, domestic pressure presents the other mitigator that seems not to exist in China. Every tariff, every quota, and every restriction of any kind creates domestic winners and losers. A steel tariff, for example, benefits steel producers at the expense of steel users. Pressures from these losers limit most nations’ use of aggressive behavior in trade policy. But China’s top-down, planned economy faces little such pressure, allowing Beijing to swing trade policy without such considerations and frequently to suit even transitory needs.

There is, however, a price to Beijing’s behavior. Three recent examples illustrate how Beijing behaves and how it will eventually hurt Chinese economics.

In early 2021, rising energy prices pushed up the price of fertilizer in China. In a truly market-based economy, the price increase would bring on increased supplies and a search for substitutes. But China’s top-town planners are less sensitive to price. Rather than allow producers to adjust, Beijing’s National Development and Reform Commission set out to relieve a momentary shortage by ordering a halt to any fertilizer exports.

Food shortages developed, which intensified in 2022 with the loss of Russian and Ukrainian grain supplies. In the meantime, the loss of Russian fertilizer exports has left all, including China, again facing fertilizer shortages and high prices, something that would not be the case had China allowed producers to step up production in the first place.

Steel manipulation provides another example. After decades of excess Chinese steel output and predatory pricing to promote exports, much steel production in Europe, Japan, and the United States had shuttered.

By 2020, China produced about half the world’s steel. That year Beijing’s planners suddenly decided to cut back on production, mostly because of the pandemic but ostensibly for environmental reasons. Prices rose everywhere. While China’s trading partners scrambled to reestablish production, the planners in Beijing decided that the way to ease domestic price pressures was not to reemploy idle capacity but rather restrict exports by jacking up export taxes on steel products and easing former restrictions on imports of steel scrap.

These moves stabilized prices within China but intensified shortages and price pressures elsewhere. China made no friends doing this in the West and elsewhere. Instead, it acquired a reputation as an unreliable source. If Beijing were again to seek an increase in exports for any reason, it might find less enthusiastic buyers than if it had ignored its planners and, following market signals, had increased output.

The story of Chinese pork starts a little earlier. In 2018, China consumed about half the world’s pork, a staple of the Chinese diet. In addition to its own production, China imported about 17 percent of the global supply. When Asian swine fever forced China to cull some 40 percent of its pig herd, prices soared across the globe. Other economies responded by switching to other foods and beginning the process of building up their herds.

China again turned to trade policy. It cut its pork import tariffs from 12 percent to 8 percent, doubling its imports but in the process slowing the rebuilding of domestic production. Eventually, China did rebuild its herd, at which point Beijing returned pork tariffs to 12 percent.

Anyone who had responded to China’s immediate need was left with pork that it could not get rid of except at discount prices and an intense desire to rethink any renewed engagement with China.

If China were a market-based economy, its business leaders would make longer-term decisions on what they dared with their trading partners. If China were a less command-driven nation, Beijing would consider domestic interests when making policy decisions. But it is a top-down, planned economy that brooks no complaints from anyone. Its leaders and planners take neither heed of trading relationships nor will they consider the complaints of domestic interests.

If China were a small economy, as it once was, the absence of such moderators in trade policy would have little effect on its trading partners. But China is neither a market-based economy nor a small one.

The sudden shifts that Beijing engages in have a profound impact on others. Recognizing all this, leaders in most other countries would reconsider their involvement in China trade if they take any heed to long-term consequences. Beijing’s approach is hurting China’s long-term economic prospects.