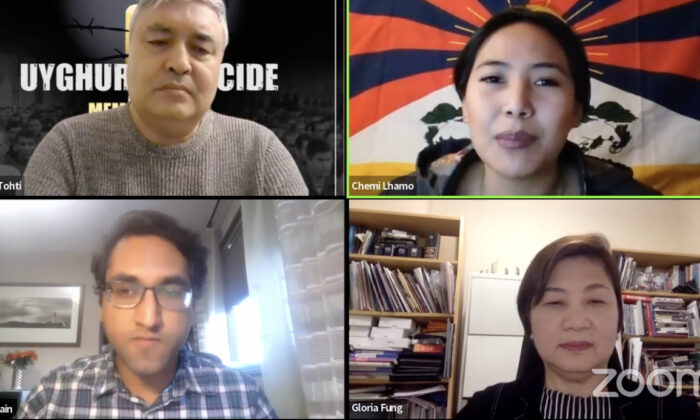 The 2022 Beijing Winter Olympics is an opportunity for the Chinese communist regime to legitimize the ongoing genocide and atrocities it inflicts on Tibetans, Uyghurs, Hong Kongers, and other minorities in China, human rights advocates said, as they called for a full international boycott of the Games.

In a Jan. 4 panel discussion hosted by the Canada Tibet Committee, rights advocates said that a diplomatic boycott—which involves a country not sending diplomats or government officials to participate, while allowing its athletes to compete in the Games—is not a strong enough response to the atrocities committed by the Chinese regime.

“To be cheering on our athletes while they’re in Beijing, when just outside the stadium there is a genocide being committed against the Uyghurs and the Tibetans is the same as applauding for the Chinese government itself,” Chemi Lhamo, an outspoken Tibetan-Canadian activist, told the panelists.

In light of the Chinese Communist Party’s (CCP) human rights abuses, countries including Canada, the United States, the United Kingdom, Australia, and Japan are imposing a diplomatic boycott on the 2022 Winter Olympic Games, which is set to take place in Beijing from Feb. 4 to Feb. 20.

Lhamo said the Chinese regime is using the 2022 Winter Olympics, a prestigious event, to legitimize its draconian conduct, despite it often pretending to not care about the views and criticisms from the international community.

On Feb. 22, 2021, Canadian parliamentarians unanimously passed a motion to recognize the Chinese regime’s abuse of the Uyghurs and other Turkic Muslims to be an act of genocide.

Mehmet Tohti, executive director of the Uyghur Rights Advocacy Project, said that while the International Olympic Committee (IOC) defended China being the host of the 2022 Winter Olympics, CCP propaganda indicates that the regime is using the Games “to garner the legitimacy for its atrocity.”

He added that the 2008 Beijing Olympics was China’s test to see the will of Western democracies in upholding their values, yet in that moment, “money, again, prevailed over human rights,” which he said has led to more human rights tragedies since.

“Over the course of time since 2008 to 2022, more than 14 years passed, and the freedoms and rights and mobility and every aspect of personal choice heavily deteriorated in China,” Tohti said.

Gloria Fung, president of the pro-democracy Canada-Hong Kong Link, told the panel that many Canadians with connections to the city are dismayed about it becoming a “police state under the thumb of an undemocratic puppet government, whose strings are pulled by the Chinese Communist Party.”

She noted that hidden away under the CCP’s “shameless propaganda,” which targets both domestic and international audiences, are the many political prisoners who were jailed for criticizing or writing the truth about the communist regime.

“Hong Kong’s national security law has essentially criminalized criticism of the CCP’s official line and has been used to eliminate rule of law, human rights, democracy, and freedom from this international city of Hong Kong,” Fung said.

The highest Chinese legislature enacted the Hong Kong national security law in June 2020, in the wake of massive protests sparked by a controversial extradition bill that would significantly undermine Hong Kong’s autonomy. The legislation met criticism from around the world, as it allows Beijing to bypass the city’s legislature while criminalizing open speech and even verbal promotion for Hong Kong’s independence from China.

“Numerous Hong Kongers have been charged, arrested for exercising the civil liberties that were guaranteed by Beijing in the Sino-British Joint Declaration and the Hong Kong Basic Law. Many opposition parties, civil society organizations, as well as media outlets have been dismantled,” Fung said.

“There are no more political rights, no freedom of expression in Hong Kong. It has been turned into a silent city and a prison without walls.”

Fung noted that Hong Kong, Tibet, and the East Turkestan regions are not the only places the CCP seeks to control through the national security law, which has extra-territorial application, meaning that people who criticize the Chinese regime in foreign countries like Canada could also be seen as having committed a crime when they visit the city.

“The long arm of [the] Chinese Communist Party reaches even to Canada, where agents intimidate and harass Hong Kongers and other activists in the diaspora communities,” Fung said.

“They make threatening calls, hack our computers, blacklist business people, and launch disinformation campaign to discredit public office candidates who are critical towards the Chinese policies.”

Lhamo, for one, has been the target of a coordinated disinformation and harassment campaign. She was bombarded with threats and hateful comments targeting her Tibetan origin after being elected president of the University of Toronto’s Scarborough campus student union in 2019.

Lhamo added that the Chinese regime is trying to eliminate the Tibetan identity, citing a recent report, published by the Tibet Action Institute, that found an estimated 800,000 to 900,000 Tibetan children are being removed from their families and forced into “colonial boarding schools” for that purpose.

“When we’re talking about these Olympics, this is one of the ways that I feel the international community can rise to make sure that we send a strong message to the Chinese government, letting them know that their egregious human rights abuses are not going to slide, that we’re not going to let them continue what they’re doing,” she said.