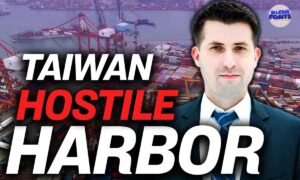 Ian Easton: An Invasion of Taiwan Would Be Nothing Like We've Seen in Modern Warfare
0
Share Now
TelegramFacebookTweetEmailTellMeWeReddit
Copy Link 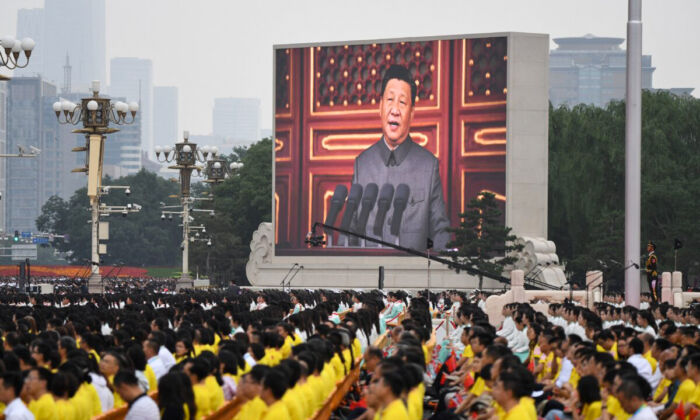 Chinese leader Xi Jinping (on screen) delivers a speech during the celebrations of the 100th anniversary of the founding of the Communist Party of China at Tiananmen Square in Beijing on July 1, 2021. (Wang Zhao/AFP via Getty Images)
US-China Relations

Beijing Will Be ‘Playing With Fire’ If It Tests US Resolve Over Taiwan: Expert

WASHINGTON—The chaotic U.S. departure from Kabul has presented a “golden opportunity” for China, but testing U.S. resolve over Taiwan’s independence would be a big miscalculation on Beijing’s part, according to experts.

Through its media, the Chinese Communist Party (CCP) has been pushing the narrative that “the U.S. is not reliable” and that Washington would leave Taiwan in the lurch just like its “Afghan abandonment,” should Beijing invade the island.

Beijing has waged a growing campaign of military intimidation and propaganda against the democratic island, and recent efforts by China to undermine the Taiwan people’s confidence in U.S. support are not surprising, according to Dean Cheng, senior research fellow at the Heritage Foundation. But China would be engaging in “remarkably risky behavior” if it chose to use force against Taiwan.

“Beijing would be playing with fire, would be running into incredible risks to test whether or not the United States would remain committed to Taiwan,” he told The Epoch Times.

The United States could be unpredictable when it comes to deciding to use force in defense of a country that’s being attacked, he said.

“It’s useful to recall the South Korean example in 1950 and the Kuwait example in 1990” to grasp the possibility of the United States defending Taiwan, he said.

Communist North Korea invaded South Korea in June 1950, and within days, the United States came to the aid of South Korea without having any defense treaty commitment.

The United States doesn’t have a formal diplomatic relationship with Taiwan, but maintains unofficial ties with the self-ruled island under the 1979 Taiwan Relations Act, which doesn’t include any defense commitments, although it does say “any effort to determine the future of Taiwan by other than peaceful means … [is] of grave concern to the United States.”

Taiwan’s economic and strategic importance has grown over the years, and its independence has become vital to the United States and its allies. A military invasion of Taiwan by Beijing would cause severe supply chain shocks across multiple industries, as the island is home to some of the world’s largest and most advanced chip foundries.

The Biden administration has responded to the CCP propaganda, reaffirming the U.S. commitment to Taiwan.

“We believe our commitment to Taiwan and to Israel remains as strong as it’s ever been,” national security adviser Jake Sullivan told reporters on Aug. 17.

According to Rupert Hammond-Chambers, president of the U.S.–Taiwan Business Council, “Sullivan’s bundling of Israel and Taiwan together when describing American resolve and commitments” is an important step.

“There is no security partner in the Middle East more important than Israel, and to place Taiwan in the same context provides more clarity and less ambiguity about American intentions in North Asia,” he told The Epoch Times. “In the long term, this is a good thing and a healthy trend.”

While comparisons between Taiwan and Afghanistan are difficult to make, the Afghan debacle has been a “golden opportunity” for Beijing, as it has weakened the United States’ ability to pressure China, according to Cheng.

The effect will be seen, for example, on global supply chain competition and the United States’ push to remove industrial suppliers from China.

“I think one of the great disasters of Afghanistan is that China is going to be pressing its economic partners” to not depend on the United States, but instead increase commercial ties with Beijing.

The Chinese have been playing to that aspect in securing supply chains recently, and pushing multinational companies and foreign governments to not follow U.S. advice in decoupling from China, he noted.

“The Afghan fiasco is not about American military defeat in Afghanistan,” Cheng said, noting that it’s about “these politico-economic elements” that are going to influence other countries.

The trend is evident in the recent expansion of Chinese telecom giant Huawei in emerging markets after it was booted from Western countries due to U.S.-led boycott, he noted.