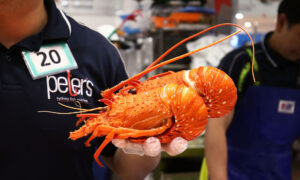 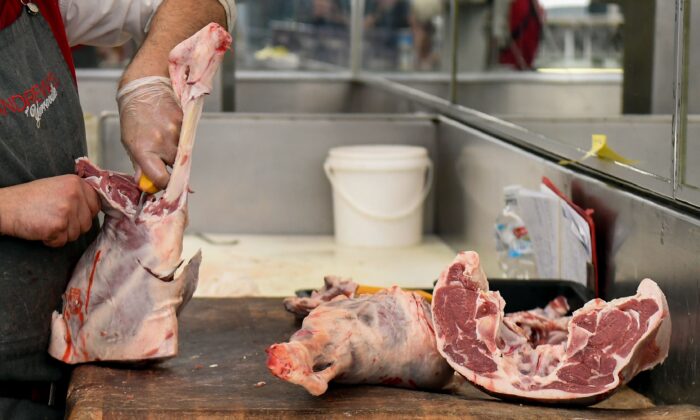 Butcher George Vourvahakis cuts up a leg of Australian lamb at his store in the Melbourne suburb of Yarraville on May 12, 2020. (William West/AFP via Getty Images)
Australia

Trade Minister Simon Birmingham has warned the world is watching as Beijing expands its suspension of Australian imports to lamb and more timber producers.

Cotton, wheat, honey, and pharmaceutical producers have been warned they could be next.

On Monday, the General Administration of Customs in China, suspended imports from the Australian Lamb Company and JBS Brooklyn, after a sixth beef abattoir had its imports held up.

The move came on the same week Chinese Communist Party (CCP) mouthpiece, The Global Times, published an editorial piece claiming that COVID-19 originated outside of China and made its way into the country via “cold-chain products.”

The editorial has since been removed.

Meanwhile, restrictions on timber imports have also widened to producers in South Australia and Tasmania, following earlier bans on Queensland and Victorian timber.

Senator Birmingham said Beijing’s behaviour was unacceptable and undermined its trade deal with Australia (ChAFTA), while flouting commitments to the World Trade Organisation.

“Australia is not the only country that has seen these types of punitive measures, and I expect the rest of the world will be watching quite closely what is happening in Australia,” he told ABC radio on Thursday.

“This is damaging not just in terms of the business or trade relationship, but it is damaging in terms of heightening the level of risk and concern that businesses right around the world have in terms of dealing with China,” he added.

Birmingham warned Australian exporters of the need to balance risk and reward in their approach to the China market.

“Through the course of this year, unfortunately, the risk of trade with China has heightened considerably,” he said.

Many sectors are still seeing record-breaking levels of trade despite the dispute.

“But for others, the risk has clearly grown, the barriers have been imposed, and our government has expressed deep dissatisfaction about it directly to China and publicly here in Australia,” Birmingham said.

“We will pursue every possible remedy we can on behalf of fair, honest, hard-working Australian industries.”

The latest moves from Beijing rounds off an ongoing series of measures being taken against Australian exports to the country including beef, barley, wine, coal, cotton, lobster, and timber industries.

The trade strikes began soon after Foreign Minister Marise Payne called for a global investigation into the origins of COVID-19, which attracted a sharp rebuke from Chinese Ambassador to Australia Cheng Jingye and veiled threats of trade sanctions.