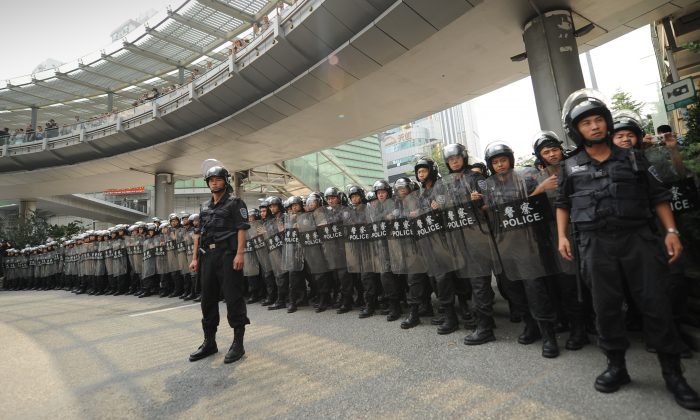 Riot police stand guard as anti-Japan protesters march during a protest over the Diaoyu islands issue, known as the Senkaku islands in Japan, in the southern Chinese city of Shenzhen on Sept. 18, 2012. (PeterParks/AFP/Getty Images)
China

Beijing Warns US Over Disputed Islands in East China Sea

The Chinese regime has renewed its claims over the Senkaku Islands (also called the Diaoyu Islands in China) in the East China Sea, and warned the United States not to intervene.

Chinese State Councilor Yang Jeichi said the U.S. should “correctly understand the Diaoyu Islands issue and be cautious with words and deeds,” according to a summary from Chinese state-run media, Xinhua. The statements were made during an August 23 meeting U.S. senators John McCain and Sheldon Washington.

Yang brought up U.S.-China relations, and the usual line of “mutual respect and cooperation.” Such statements are often used by Chinese leaders to suggest that going against the regime’s wishes will damage relations

The islands have been under Japanese control since 1895. They were passed to the United States following the Japanese surrender after World War II, yet were returned to the Japanese in 1972 through the Okinawa Reversion Treaty.

Since then, however, both Taiwan and the Chinese Communist Party have laid claim to the islands. The Chinese regime has several territorial disputes taking place, including in the South China Sea and along the border between China and India.

The Chinese regime has threatened to use nuclear weapons against the United States over conflicts in the Asia-Pacific.

“If the Americans draw their missiles and position-guided ammunition on to the target zone on China’s territory, I think we will have to respond with nuclear weapons,” the official, Maj. Gen. Zhu Chenghu, said in a 2005 briefing, the New York Times reported.

The Chinese general added that in such a conflict “we will prepare ourselves for the destruction of all the cities east of Xian,” which would include Beijing and Shanghai, states a Guardian report on the same speech from 2005.

The regime’s strengthened its threats of nuclear war in 2011. It released a new policy that if a nuclear-capable country launched strikes against China’s key strategic points, the regime would launch a pre-emptive nuclear strike against that country.

Just prior to Yang’s recent statements, on Aug. 21 Chang Wanquan, the regime’s state councilor and minister of national defense, spoke in Washington about the U.S. military shift to the Asia-Pacific.

“We Chinese people are peace lovers,” he said. “It is hoped that the Asia-Pacific rebalancing strategy of the United States is neither directed against China nor meant to weaken China,”

He then switched tones, saying, “Don’t underestimate our determination and unswerving will in safeguarding our national territorial sovereign and maritime rights and interests.”