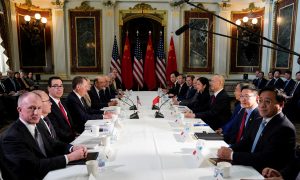 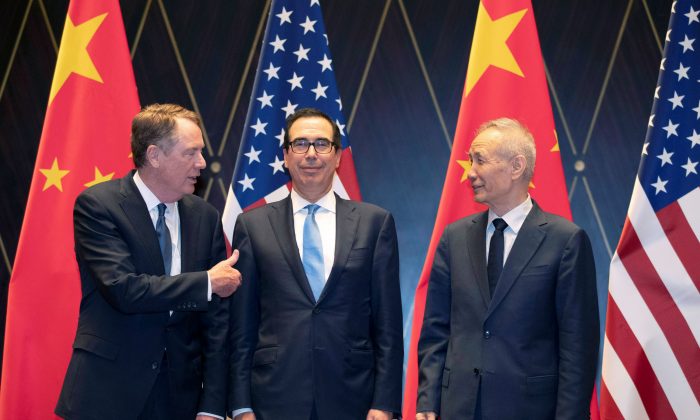 U.S. Trade Representative Robert Lighthizer gestures towards Treasury Secretary Steven Mnuchin as he chats with Chinese Vice Premier Liu He before they pose for a family photo at the Xijiao Conference Center in Shanghai, China, July 31, 2019. (Ng Han Guan/Pool via Reuters)
US-China Relations

The Chinese regime warned it would retaliate if U.S. President Donald Trump’s planned new tariffs go ahead, escalating tensions between the world’s biggest economies in an ongoing trade war.

Trump shocked financial markets on Aug. 1 when he announced that the United States would slap a duty of 10 percent on $300 billion of Chinese goods that are currently not tariffed, to take effect on Sept. 1.

The move came a day after the two sides held talks in Shanghai, which both sides described as “constructive.” They were the first in-person meetings since negotiations broke down in early May.

Beijing on Aug. 2 said it would take retaliatory action if the tariffs proceed.

“If America does pass these tariffs, then China will have to take the necessary countermeasures to protect the country’s core and fundamental interests,”Chinese Foreign Ministry spokeswoman Hua Chunying told a news briefing in Beijing.

“We won’t accept any maximum pressure, intimidation, or blackmail. On the major issues of principle, we won’t give an inch,” she said.

Trump also threatened that the planned tariffs could later be increased in stages, even to more than 25 percent, if talks do not advance more quickly toward a deal.

The United States currently levies duties of 25 percent on $250 billion of Chinese goods. The newly announced tariffs would apply to nearly all remaining Chinese imports—including smartphones, apparel, and other consumer goods.

On Aug. 2, White House economic adviser Larry Kudlow told reporters at the White House that Trump had met with U.S. trade negotiators upon their return from Shanghai.

“In terms of the progress of the deal, the president is not satisfied,” Kudlow said. Trump subsequently informed Chinese leader Xi Jinping of the decision to impose new tariffs, Kudlow added.

Also on Aug. 2, China’s Foreign Minister Wang Yi told reporters on the sidelines of a meeting of Southeast Asian nations in Bangkok, Thailand that the additional tariffs were “definitely not a constructive way to resolve economic and trade frictions.”

U.S. Secretary of State Mike Pompeo, who was also in Bangkok for the meeting, denounced “decades of bad behavior” by China.

“For decades, China has taken advantage of trade,” Pompeo said on Aug. 2. “It’s time for that to stop. President Trump said we’re gonna fix this. And to fix it requires determination, and that’s what you saw.”

The news hit financial markets hard. On Friday, Asian and European stocks took a battering. Safe-haven assets such as the Japanese yen, gold, and government bonds jumped as investors rushed for cover.

Asked about the impact on financial markets, Trump told reporters on Aug. 1: “I’m not concerned about that at all.”

He said any impact of the tariffs on the American consumer would be “minuscule,” adding that the “economic burdens have fallen most heavily on China.”

Kudlow added that because of the trade war, Chinese companies have had to slash prices in order to compete, damaging companies’ profits.

Meanwhile, the overall Chinese economy has slowed to its lowest growth rates in decades. In addition, many multinational companies have shifted production out of China, and “it’s doubtful they’ll get those markets back,” he said.

Possible retaliatory measures by China could include tariffs, a ban on the export of rare earths that are used to manufacture electronics from military equipment to consumer electronics, as well as penalties against U.S. companies in China, analysts say.

So far, Beijing has refrained from slapping tariffs on U.S. crude oil and big aircraft, after cumulatively imposing retaliatory tariffs of up to 25 percent on roughly $110 billion of U.S. goods since the trade war broke out last year.

China is also drafting a list of “unreliable entities,” consisting of foreign businesses and individuals who have harmed the interests of Chinese businesses. U.S. delivery giant FedEx is already under investigation by China, for allegedly diverting packages to Chinese tech giant Huawei.

Frank Xie, business professor at the University of South Carolina Aiken, told The Epoch Times that the Chinese regime is running out of ammunition in possible retaliatory measures, as it has already imposed tariffs on almost all U.S. goods imported into the country.

Beijing therefore only has the option of instituting non-tariff barriers, Xie said, such as restrictions for U.S. companies; limitations on money transfers and the hiring of American personnel; or sales of U.S. treasury bonds. China is the largest holder of U.S. debt.

Xie said the regime’s overriding concern is to ensure that more companies do not move its production out of China. It is now in a difficult position because any penalties against U.S. companies may accelerate this process, while further drawing Trump’s ire—which would likely lead to tougher U.S. action.

“[The Chinese regime] is really desperate now,” Xie said. “They’ll have to use whatever they have [available].”

Trump also said that China has not followed through on its commitment to stem the flow of synthetic opioid fentanyl into the United States. Xi agreed to this measure during a meeting with Trump at the sidelines of the G-20 in Argentina in December 2018.

“Additionally, my friend President Xi said that he would stop the sale of Fentanyl to the United States – this never happened, and many Americans continue to die!” Trump tweeted on Thursday.

China manufactures most of the fentanyl and fentanyl analogues found in the United States. The Chinese regime had pledged that from May 1 it would expand the list of narcotics subject to state control to include 1,400 known fentanyl analogues, which have slightly different chemical makeup but are addictive and potentially deadly.

However, U.S. lawmakers, officials, and experts have expressed skepticism about Beijing’s willingness and ability to implement these changes.

The synthetic drugs have contributed to the current opioid crisis; the United States recorded more than 28,000 synthetic opioid-related overdose deaths in 2017, according to the U.S. Centers for Disease Control and Prevention, the majority of them fentanyl-related.

The president also said the Chinese regime has not delivered on its goodwill pledge to buy more U.S. agricultural products as part of an agreement made with Xi to restart talks during the sidelines of the G-20 in Japan in late June.

The U.S. Department of Agriculture on Thursday confirmed a small private sale to China of 68,000 tons of soybeans in the week that ended on July 25.

However, large-scale purchases have not been forthcoming. Chinese imports of U.S. soybeans in the first half of this year fell to the lowest level since 2004, Bloomberg reported.