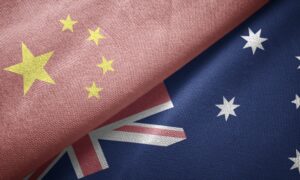 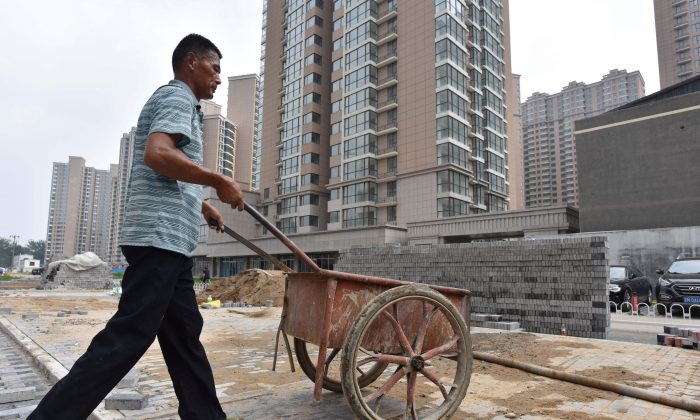 A worker pushes cart at the construction site of a housing complex under construction in Beijing on Aug. 15, 2017. (Greg Baker/AFP/Getty Images)
Thinking About China

In late 1979, then-Federal Reserve Chairman Paul Volcker announced a bold plan to get rid of the high inflation that had plagued the U.S. economy for much of the 1970s—raising interest rates to 20 percent.

The move sent the U.S. economy spiraling into a severe recession for the first few years following it, but it eventually paved the way for a decade of economic recovery and growth. The move was dubbed the “Volcker Moment” years later by economist Mohamed El-Erian.

It’s not a perfect analogy, but there are some parallels. Beijing’s current goal isn’t to stop inflation, but to halt a decade of rampant real estate speculation and debt expansion.

“[China] has attached national strategic importance to rein in the property sector, directly intervening in credit supply and leaving little scope to dial back these curbs,” Nomura stated in a summary of Lu’s analysis.

Chinese regulators are making it more difficult for developers to obtain financing and for households to make purchases in certain jurisdictions. Recent edicts have tempered housing price increases and decreased the rate of sales growth. Certain regulatory actions—such as the “three red lines” directive aimed to deleverage property developers—have directly hurt developers, with Evergrande, one of the largest, on the brink of bankruptcy.

But we’ve seen this play out before.

Over the years, I’ve written in this publication about the impending doom of China’s real estate market—and was proven wrong—more times than the proverbial boy who “cried wolf.”

Regular readers know that there’s an ebb and flow to the Chinese property market. China has been in a cycle of restraining and then stimulating its real estate market for the better part of the past 20 years. Regulators announce targeted anti-speculation measures, and if property prices decline, they increase liquidity and loosen borrowing criteria. Over time, property prices have steadily increased nationally.

Beijing has been carefully managing the steady growth of property prices over the years and for good reason. Real estate serves as the main vehicle of wealth for most of the Chinese people—aside from the captains of industry and Chinese Communist Party officials.

“But this time is different,” Lu said, fully aware of the dangers of making such a statement on Wall Street.

But I don’t believe that this is Beijing’s ultimate goal.

CCP regime boss Xi Jinping does believe wealth inequality is a social issue. But the real estate market is more of a contributor to “common prosperity” than a detractor.

It can be argued that the property market has singlehandedly created China’s middle class. Of course, there are rich citizens owning many units of real estate who are wealthier than others. But much of the household wealth of China’s middle class is tied up in real estate, and China has hundreds of millions of households with only one or two apartment units.

With Xi boldly eyeing a third term as general secretary of the CCP next year, it’s unlikely that he’ll approve a massive decline in property prices. Protests in the streets and social instability are anathema to the ruling CCP.

However, this doesn’t mean that something can’t go wrong.

China Evergrande, the world’s most indebted property developer, is a wildcard. Evergrande has been in trouble for years, but most recently, the alarm bells have been going off on an imminent default.

Property developers have already defaulted on more than $6 billion of debt in 2021, according to Bloomberg. Beijing has been letting more firms default and probably wouldn’t be opposed to letting Evergrande and its $300 billion burden in liabilities go bust, if not for its critical position as the country’s leading property developer.

On Sept. 9, Beijing gave Evergrande a lifeline by allowing it to renegotiate some payment terms with bank lenders. There are 1.5 million customers who have paid Evergrande down payments and are waiting for their apartments to be built. There have already been reports of protests by pending property owners demanding that Evergrande continue construction to deliver their units.

It’s a very delicate situation, and I doubt Xi is keen on seeing a chaotic collapse of Evergrande. How Beijing manages the Evergrande situation bears watching. Will it be allowed to default? Will it continue to restructure? Will Beijing allow Evergrande to fold and either reimburse potential homebuyers or assign another real estate company to finish the construction of existing projects?

Regardless, the CCP is walking on a thin tightrope. To deleverage and temper housing prices while preventing a catastrophe is an increasingly difficult task. And this all needs to be managed against a backdrop of slowing economic growth and lower external demand.

The CCP has pulled it off before, but its margin of error is almost nonexistent now.