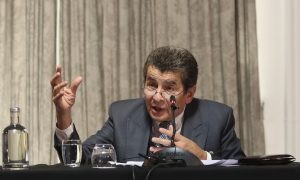 China Daily, an English-language Chinese state-run newspaper, has for years paid U.S. media outlets millions of dollars to run advertorial inserts called “China Watch.” They typically contain pro-Beijing articles about U.S.–China relations, the Chinese economy, and culture. These partnerships have drawn criticism from lawmakers and experts who say they allow China’s communist regime to piggyback on reputable Western outlets to disseminate its propaganda.

Chang, in a recent interview with The Epoch Times’ “American Thought Leaders” program, said these inserts allow the Chinese regime to propagate its own narratives to a U.S. audience.

For instance, the L.A. Times carried a “China Watch” supplement in its Sunday edition on Nov. 29. The second page contained an article headlined, “More people sign up as organ donors,” which claimed that registered organ donors in China had increased by more than double in the past 20 months, according to China’s Red Cross. The Red Cross in China, unlike its international counterparts, is directly funded and controlled by the Chinese Communist Party.

“As we go through those inserts, we’re going to see what China is most concerned about. And obviously, organ harvesting is on the list,” Chang said.

Allegations of state-sanctioned organ trafficking taking place in China first surfaced around 2006. In 2019, an independent tribunal concluded, after a yearlong investigation, that the Chinese regime has been—and still is—killing prisoners of conscience for organs to sell on the transplant market “on a substantial scale.” The main source of organs is imprisoned Falun Gong practitioners, the tribunal said. It also found that China’s voluntary organ donation figures didn’t match the number of transplants performed. The Chinese regime has claimed that since 2015, all organs for transplants have come from voluntary donors.

China’s organ harvesting is “a narrative that the L.A. Times supplement tries to counter,” Chang said.

Reading between the lines, the point of the China Watch article was to convey, “essentially, that all of these organs are available in China because they come from willing donors,” he said.

“But there is substantial evidence—growing evidence—that defenseless people are being killed for their organs … so we’ve got to realize that this is not just some sort of laughable propaganda put into the LA Times. This really is promoting insidious narratives,” Chang said.

China Daily paid the L.A. Times $340,000 for advertising campaigns between June and October, according to the latest filings with the Justice Department under the Foreign Agents Registration Act (FARA). It also paid the U.S. outlet $111,000 for printing costs between May and October.

The FARA filing showed that China Daily also paid The Wall Street Journal, Foreign Policy magazine, the UK-based Financial Times, and Canadian Globe & Mail for advertising campaigns. Payments for those outlets during the period of May through October ranged from $85,000 to $223,000.

“The Los Angeles Times accepted a lot of money to propagate China’s narrative on this. … So shame on the L.A. Times. Shame on the other major U.S. publications that have run similar inserts,” Chang said.

The L.A. Times didn’t immediately return a request by The Epoch Times for comment.