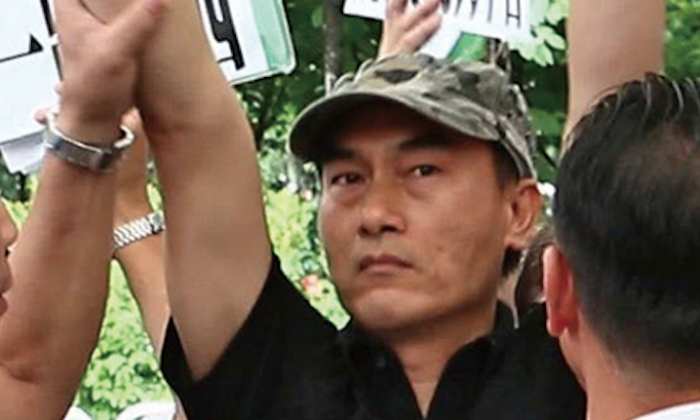 A man who is suspected as a CCP agent, has been recognized participating in the July 26 City-forum program recording site. During the recording of the City-Forum program, the man shouted loudly against host Tse Chi-fung. (Epoch Times)
China

HONG KONG—The same tactics of propaganda and public criticism that were used in China’s Cultural Revolution are being brought out again to try to interfere with the recent University of Hong Kong (HKU) election controversy.

In February, evidence emerged that the Hong Kong government had tried to obstruct Johannes Chan Man-mun, former dean of the HKU Faculty of Law, from being appointed pro vice-chancellor of the university. Chan is an advocate of democracy for Hong Kong.

Chan’s appointment is still being delayed, and HKU students have protested for the university’s freedom to choose a pro vice-chancellor without meddling by the government.

Ta Kung Pao published criticism about the incident on its front page for seven days, and Wen Wei Po for five days. On Aug. 3, an overseas edition of the CCP newspaper People’s Daily also published an article requesting Chan to withdraw from being a candidate.

The pro-establishment camp and HKU council members who support Hong Kong Chief Executive Leung Chun-ying have been giving speeches on television and radio and in newspapers to cooperate with the media’s attack.

Council member and supporter of Hong Kong Chief Executive CY Leung, Lo Chung-mau, fell over during a school board meeting. Ta Kung Pao and Wen Wei Po reported that Lo’s fall was the result of an attack from the students.

Lo initially claimed that he was kicked by the students. Later, extensive media coverage indicated that he fell over on his own. Lo then changed his version of the event.

One week after this incident, another Leung-supporting HKU council member, Arthur Li Kwok-cheung, told the media that he was attacked from the back and his right kidney was hit. However, he said the results of a medical test were normal, and he would not report the incident to the police.

Koon Hao-ming, Provincial Secretary General of the Hong Kong Anglican Church, is said to belong to the pro-Beijing camp. During his interview with Wen Wei Po, Koon criticized the students and said the opposition had deliberately leaked out the pro-vice chancellor candidate to attempt to get Chan selected.

Koon added that pro-vice chancellor candidates should “at least be clear on the need of stability of Hong Kong and the country.”

On Aug. 4, HKU Associate Professor of Faculty of Education Li Hui stated in a newspaper article that Chan was not qualified to be the pro-vice chancellor. On Aug. 5, he told Wen Wei Po that Chan should withdraw from the selection and “not drag HKU along to be buried.”

The CCP has also mobilized its peripheral organizations to intrude on the students’ protests. One man who interfered with the protests has also been seen abusing participants in a number of other activities, including a July 18 parade that supported Falun Gong practitioners’ legal case against former CCP leader Jiang Zemin for his human rights abuses.

The man was also present at the July 26 City-Forum program recording site, where he shouted loudly against host Tse Chi-fung and was later advised to leave.

On the morning of Aug. 3, the man followed pro-communist groups to HKU to protest. They asked HKU to discipline the students involved, and they denounced the Vice-Chancellor and asked Chan to withdraw.

That same afternoon, the man was involved in attacking a Falun Gong practitioner, Ms. Cheung, who was demonstrating at East Tsim Sha Tsui. Ms. Cheung was sent to the hospital with a wounded knee. The man fled after the incident, and the police are investigating the case.

The tactics the CCP has adopted in the university incident are similar to those used by Leung and pro-communist forces to suppress primary school teacher Lam Wai-sze in 2013.

In July that year, Lam came forward to condemn the Hong Kong Youth Care Association, a pro-CCP organization, when she witnessed them disturbing a Falun Gong information site. She also condemned the CCP’s killing and human organ trafficking, saying, “Everyone in the world knows.”

Her actions met with an outpouring of public support. However, she was soon attacked by pro-communist media, the pro-establishment political camp, and pro-communist organizations, which portrayed her as a violent aggressor. Chief Executive Leung also asked the Education Ministry and Regional Crime Unit to investigate Lam.