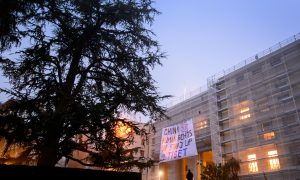 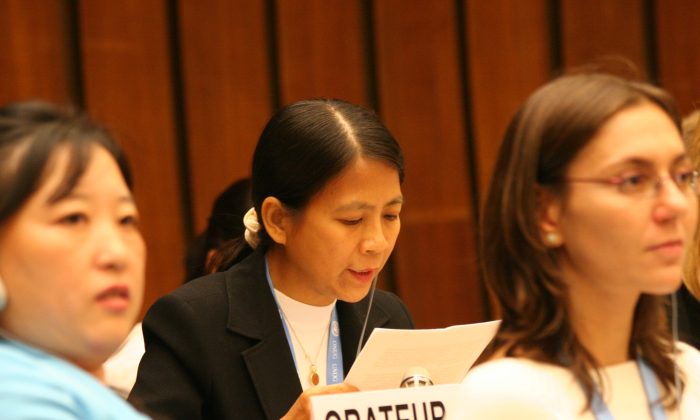 GENEVA: Ng Chye Huay, Falun Gong practitioner from Singapore, reads her prepared statement in front of the main plenary of the Second session of the United Nations Human Rights Council on September 20, 2006. She thanked UN Special Rapporteurs for their interventions on behalf of her and other practitioners, and blasted Beijing for its contined abuses of the group. (The Epoch Times)
China

GENEVA—”A systematic form of inhuman and degrading treatment” is how Manfred Nowak, United Nations (U.N.) Special Rapporteur, described what he sees as “widespread” use of torture in the People’s Republic of China (PRC).

Nowak spoke to the U.N. Human Rights Council in Geneva last week. His statement was one of several putting the PRC’s appalling human rights record under close scrutiny during the Second Session of the Council.

“I believe that the practice of torture, though on the decline, particularly in urban areas, remains widespread in China,” said Nowak, whose mandate encompasses torture and other cruel, inhumane or degrading treatment or punishment.

“I was particularly concerned about the continuing practice of forced re-education of persons with dissident or non-conformist opinions, aiming at changing their personality and breaking their will, both in special re-education through labor camps, regular prisons, and even in pre-trial detention facilities,” he said.

In his reply to Nowak, PRC representative Sha Zukang said that the Chinese government had done all it could to assist Nowak, and wanted to “continue to cooperate” with U.N. human rights mechanisms.

In his report, however, Nowak noted that during his China visit, a number of alleged victims, family members, lawyers and human rights defenders were intimidated by security personnel, placed under police surveillance, instructed not to meet with him, or physically prevented from attending meetings.

In a speech to the Council last week, former Canadian MP and Secretary of State for Asia-Pacific David Kilgour summarized the findings of his recent report, co-written with human rights attorney David Matas, on allegations of China’s systematic killing of prisoners of conscience for their organs.

“This is a terrible outrage, a new crime against humanity, and it has to stop,” he said in an interview.

“It certainly has to stop before the Olympic games, and if it doesn’t stop before the games I think a lot of people, hopefully a lot of governments and a lot of athletes will decide they simply cannot go to a country that is killing human beings who have done nothing wrong except believe in Truth, Compassion and Forbearance,” he said. The three principles are the core tenets of Falun Gong, a spiritual practice persecuted in China since 1999.

In reply, the PRC representative verbally attacked Falun Gong, and attempted to discredit the report’s findings by pointing to Sujiatun Hospital.

Sujiatun was first identified by a dissident Chinese journalist as a concentration camp where organs were being harvested against their owners’ will. Later, the wife of a surgeon at the hospital confirmed the story, saying that her husband had removed corneas from living Falun Gong practitioners.

Two weeks after the initial organ harvesting allegations were made public, U.S. embassy officials visited Sujiatun in a tour escorted by Chinese officials. The diplomats found little of interest.

Falun Gong spokespeople and other experts have highlighted the ample time available for a thorough cover-up, and China’s history of doing just that.

The Kilgour and Matas report points to evidence of many hospitals across mainland China being involved in the practice of live organ harvesting. It says that the sources of over 40,000 organs are unexplained.

“They [Chinese authorities] have reacted to our report with absolutely nothing in terms of substance,” said Kilgour.

None of Beijing’s several responses to Kilgour and Matas’ allegations to date appear to directly address the evidence that the two lawyers presented. The official responses largely seem to attack the two men personally, and question the independence of their findings.

“In a curious way, I take it that they are unintentionally endorsing our report as being sound,” said Kilgour.

Other victims of Chinese Communist Party (CCP) torture also spoke out. At a U.N. parallel session co-sponsored by Interfaith International and the Transnational Radical Party, a husband and wife pair of Falun Gong practitioners said that each of them had spent over five years in prison and forced labor camps before finding asylum in Norway via Thailand.

Dai Ying has partially lost sight in one of her eyes due to electric baton torture. She said that in a labor camp she spent 17 hours per day sewing leather shoes for export to the United States and Europe. She also recalled a different aspect of her incarceration, extensive physical examinations with no apparent purpose.

“We did not know the reason why only Falun Gong practitioners were physically examined, but one thing we did know, it was not done for care of our health,” she said. Apparently, non-practitioners were not examined this way, and after organ harvesting allegations surfaced last spring, Dai began to suspect she had been assessed as a potential organ donor.

Sharon Hom, Executive Director of Human Rights in China (HRIC), who also attended the HR Council, has been lobbying to get independent inside-access to China for years.

“I think the most important thing that we need to push for, not only on organ transplants but on all the violations [is] that there must be access by independent investigators inside China, and that’s the way I think we will get the full story,” she said.

Interfaith International representative and Falun Gong practitioner Ng Chye Huay had been arrested in Singapore for “illegal assembly” and “harassment” for repeatedly meditating in front of the Chinese embassy with a banner.

“Pressed by the Chinese government, the Singapore authorities [have] discriminated [against] Falun Gong also,” said Ng.

Ng’s defense counsel, Ravi Madasamy, was arrested by Singapore authorities and put in a psychiatric hospital on the day he was due to fly to Geneva to address the Human Rights Council.

From its headquarters in London, Amnesty International issued its own damning perspective on human rights in China, highlighting Beijing’s Olympic bid, in a report published on September 21, day four of the Council.

“The serious human rights abuses that continue to be reported every day across [China] fly in the face of the promises the Chinese government made when it was bidding for the Olympics,” said Catherine Baber, Deputy Asia Pacific Director at Amnesty International, in a press release.

“The current state of affairs runs counter to the most basic interpretation of the ‘Olympic spirit’ with the ‘preservation of human dignity’ at its heart.”

A cautiously optimistic Kilgour maintains that the Olympics could yet prove to be a powerful tool to change the situation.

“I think momentum is growing. I think if all of us get on our Internet and on our computers and send emails by the thousands, we will reach the tipping point when the government of China will think if it doesn’t stop this terrible [organ harvesting] its Olympic games might be affected. That’s the thing, that’s the tipping point, and we have to take advantage of that, to push and push and push, all of us.”

Additional reporting by Jing Xie of NTDTV in Geneva