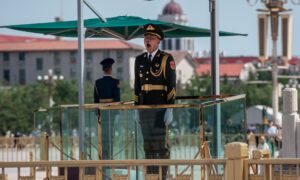 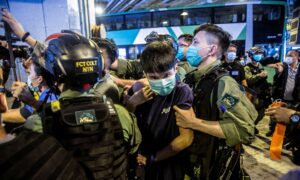 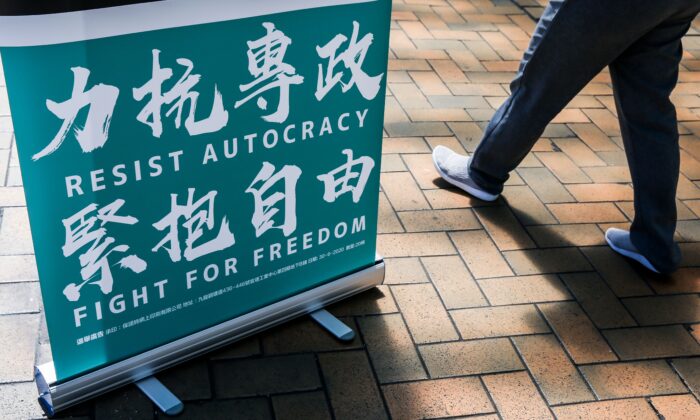 A sign is set up at a campaign location during primary elections in Hong Kong on July 12, 2020. (Isaac Lawrence/AFP via Getty Images)
China-US News

Governments and officials around the world have condemned the Hong Kong government’s decision to delay an upcoming election, saying it was Beijing’s latest affront on the city’s freedoms.

Rubio said Beijing was exploiting the virus pandemic to “remake Hong Kong in its image” and that “Hongkongers’ political freedoms are being crushed daily.”

White House press secretary Kayleigh McEnany, at a Friday press conference, condemned the election postponement, saying the action “undermines the democratic processes and freedoms that have underpinned Hong Kong’s prosperity,” and is “only the most recent in a growing list of broken promises by Beijing.”

The move dealt a blow to the local pro-democracy camp, which hoped to win a majority of seats in the legislature. In mid-July, more than half a million Hongkongers came out to cast ballots in an unofficial primary organized by pro-democracy activists, a turnout widely viewed as a symbolic protest against the national security law.

The law went into effect on July 1, the 23rd anniversary of Hong Kong’s transfer of sovereignty from British to Chinese rule.

The recent developments in Hong Kong “represent a further infringement of the rights of Hong Kong citizens,” the Germany foreign ministry said in a statement on Twitter.

Law, currently in the U.K., said that he had expected such a day to come when he fled Hong Kong amid growing Chinese encroachment, but that “this becoming a reality still disappoints, incapacitates, and frightens me.”

“[W]ho can enjoy freedom from fear in the face of China’s powerful political machine?” he said on Twitter. He said he has stopped contacting family members since leaving the city and will also sever ties with them.

“The arrests, the disqualifications, the wanted bulletins—these are indications of our need to remain active on the global stage,” he continued. “That Hong Kong has no place for even such moderate views like ours underscores the absurdity of Chinese Communist rule.”

“Whether the election is tomorrow or in a year, [Hong Kong’s] desire for democracy won’t fade,” he wrote.