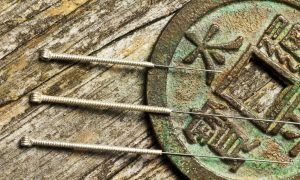 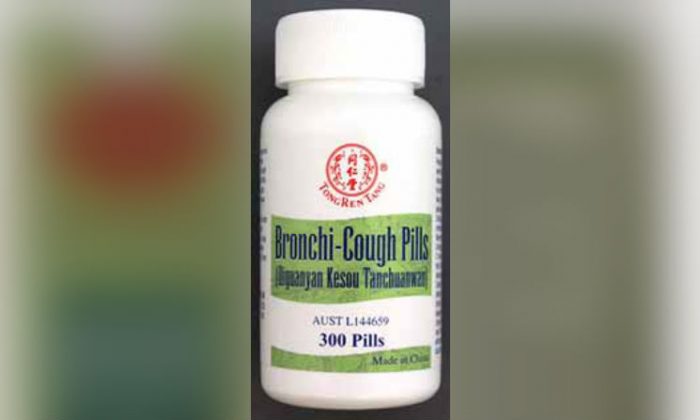 The Australian branch of a Chinese herbal medicine company in has issued an urgent recall of two batches of its cough medicine after the Therapeutic Goods Administration found contaminants linked to cancer in its products in December 2018. Photo from Bronchi-cough Pills (qiguanyan kesou tanchuanwan)- Recall due to contamination, 2018, Therapeutic Goods Administration, used with permission of the Australian Government https://www.tga.gov.au/alert/bronchi-cough-pills-qiguanyan-kesou-tanchuanwan
Australia

The Australian branch of a China-based herbal medicine company has issued an urgent recall for two batches of its herbal cough medicine after the Therapeutic Goods Administration (TGA) found contaminants linked to cancer in its product.

Beijing Tong Ren Tang Australia said it is recalling batch 16080020 and batch 4080015 of its bronchi-cough pills (Qiguanyan Kesou Tanchuanwan) because traces of aristolochic acid and amygdalin were found in one batch, and amygdalin found in the other.

Both substances are included in Schedule 10 of the Poisons Standard, which means that they are “substances of such danger to health as to warrant prohibition of sale, supply, and use.”

Ingesting these substances even in small amounts can be harmful, according to the TGA.

“If you or someone you provide care for takes bronchi-cough pills, please be alert to this issue and discontinue use immediately. The product should not be consumed,” the TGA said. “If you have any bronchi-cough pills, the remaining product can be returned to the place of purchase for a refund.”

Readers in Australia who have any questions or concern are advised to contact the 1300 287 828.

Aristocholic acids were banned in Australia after several women at a clinic in Brussels, Belgium, in the early 1990s contracted nephritis and suffered rapid kidney failure as a result. They had to be hospitalised after they had taken a weight-loss formulation containing aristocholic acids.

“There is no established safe exposure level to aristolochic acids, which have been linked to kidney problems and urinary tract cancers,” the TGA said in its recall notice.

Amygdalin was once popularised as a cure for cancer but there has been no scientific evidence for such claims. On the contrary, it contains cyanide and can cause liver damage, nerve damage, and potential death.

Amygdalin has been referred to as laetrile or vitamin B17 but the two layman terms are inaccurate—amygdalin and laetrile are different substances, and amygdalin is not a vitamin.

A spokesman for Beijing Tong Ren Tang told The Australian newspaper that the company will be investigating the issue.

“We haven’t come to a ­mutual agreement with TGA but those two substances have been found in the medicine … from our end, we’re going to carry on conducting a search into this,” he said.

The Australian asked whether Beijing Tong Ren Tang was concerned about the TGA finding traces of the substances when the company hadn’t. The spokesman responded: “It’s ­complicated.”

According to a report from Vision Times, the practice of traditional Chinese medicine (TCM) in its original form has dwindled in China over the past several decades.

But many of the TCM understandings and approaches of human health have been adopted by the Japanese. Japan is currently the country with the leading number of doctors who use TCM in their clinical practice, according to the report.

Read More
Is Chinese Medicine Being Destroyed by Chinese Herbs?

In another report featured on the World Health Organization website, a researcher explained in broken English how this departure in modernised TCM occurred.

“The policy-makers and researchers in China are seemingly having their passions for integrating TCM and modern medicine into one, and the fact [sic] turn out to be that TCM cannot employ its values completely in national health system.

“Those people educated and trained by scientific method and other so-called modern methods lack the ability of using correctly the non-medication therapies and medication therapies of TCM, and thus the clinical and preventive value of TCM in national health system is lessened by a regretful manner,” the report read.

“The goal of studying with modern methods is to enhance the value of TCM and to keep TCM from extinction, but in a long run, TCM is reformed to be another kind of medicine. Many experienced and thoughtful TCM doctors in China have proposed that the reason lies in the neglect of TCM theory.”

The report says there is “a serious flaw in the educational system of TCM including textbooks, curriculum, and faculty because many graduates from TCM academies couldn’t master the essentials of TCM,” and this has resulted in serious side effects and toxicity of Chinese medications.