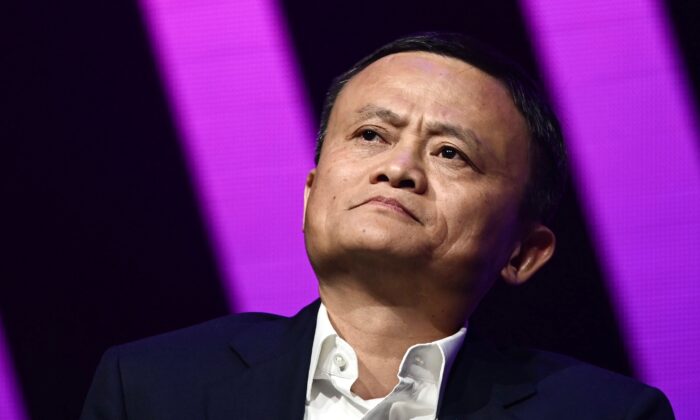 Jack Ma, CEO of Chinese e-commerce giant Alibaba, speaks during his visit at the Vivatech startups and innovation fair in Paris on May 16, 2019. (Philippe Lopez/AFP via Getty Images)
Thinking About China

The future of Ant Group, the Chinese fintech giant affiliated with Jack Ma and partially owned by e-commerce giant Alibaba, grows cloudier by the month.

The involvement of the CCDI, a much-feared Chinese Communist Party (CCP) organ that typically oversees corruption investigations of senior CCP officials, could escalate the risks surrounding Ant, its billionaire founder Jack Ma, and its biggest shareholder, Alibaba Group. Specifically, the CCDI was looking into transactions between Ant and state-controlled entities, including banks and government agencies.

Ant, Alibaba, and Jack Ma have been under CCP regulatory scrutiny dating back two years. In late 2020, Ant, which runs the popular Alipay mobile payments application, was forced to abandon a potentially record-setting IPO in Hong Kong and Shanghai. The CCP then ordered Ant to restructure its business practices and went on to revamp the regulatory standards governing the entire fintech sector.

In January, following almost a year of inquiries, the CCP expelled former Hangzhou Party Secretary Zhou Jiangyong for corruption. Both Ant and Alibaba are headquartered in Hangzhou, the capital of China’s Zhejiang Province. Zhou was believed to be a huge proponent of Ma’s business empire, although Ant denied any improper business dealings.

By early 2022, a fresh round of investigations into Ant began, which at the time, Bloomberg described as “by far the most thorough and wide-ranging” to date. In April, it was revealed that the CCDI was involved in the probe.

Perhaps it shouldn’t be a huge surprise, given the message from a January CCDI plenum meeting that suggested that the regulator was focused on reining in the so-called “disorderly expansion of capital and platform monopolies” and “the link between power and capital.” This has been the CCP’s trendy slogan for combating systemic corruption lately, although it should be mentioned that such means of business building had been the modus operandi of Chinese entrepreneurs for decades.

The company’s cloud computing arm, Aliyun (Ali Cloud), continues to miss sales expectations as the CCP has begun promoting government-sponsored cloud computing networks to establish greater control over information and data. Alibaba’s cloud computing platform had the potential to be a huge profit center—akin to the role Amazon Web Services has at Amazon—until the CCP’s recent crackdown on the industry.

This all potentially bodes ill for Jack Ma, his business empire, and his lieutenants, such as Alibaba Chairman and CEO Daniel Zhang and Vice Chairman Joseph Tsai.

Tsai, in particular, was coincidentally the subject of a long April expose by sports media giant ESPN, which called Tsai “the face of NBA’s uneasy China relationship.” Since 2019, Tsai has been the principal owner of the NBA’s Brooklyn Nets basketball franchise.

While Alibaba is facing scrutiny in China for potentially running afoul of the CCP’s political whims, the ESPN story in the United States puts one of Alibaba’s most visible leaders in a similarly uncomfortable light.

“Tsai has publicly defended some of China’s most controversial policies,” the article reads.

“He described the government’s brutal crackdown on dissent as necessary to promote economic growth; defended a law used to imprison scores of pro-democracy activists in Hong Kong as necessary to squelch separatism; and, when questioned about human rights, asserted that most of China’s 1.4 billion citizens are ‘happy about where they are.’”

The company and its executives are clearly walking a tightrope. One that may be getting thinner by the month.