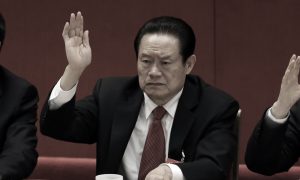 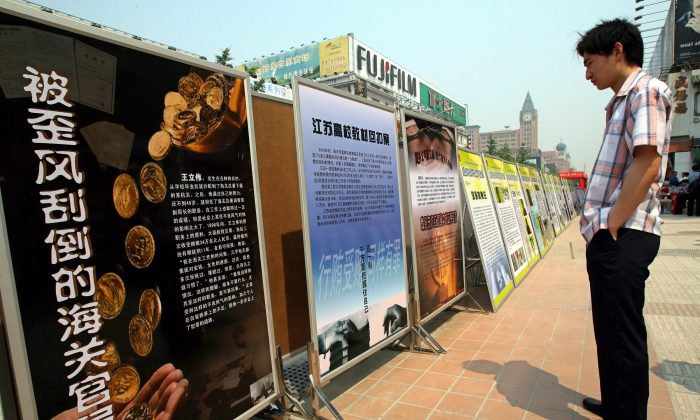 A Chinese man looks at anti-corruption billboards on display in Central Beijing, on June 11, 2007. (Teh Eng Koon/AFP/Getty Images)
China

Beijing ‘Tiger’ and Deputy of Municipal Party Committee Is Purged

Lü Xiwen, 60, was investigated for “serious violations of Party discipline,” a charge that has become synonymous with corruption in recent years. She held the post of deputy Party secretary in Beijing’s municipal committee, and also headed Beijing Administrative College, a branch of the Central Party School. The school imparts ideological indoctrination and professional training to Party cadres.

Lü is the second female Party official at the provincial level to be purged. The first was Bai Yun, a former standing committee member of Shanxi Province’s Party committee and minister of the provincial United Front work department. The United Front and its tactics of political subterfuge and social infiltration and manipulation is a Soviet-era creation, and one that the Chinese Communist Party has developed over its nearly seven decades in power.

Hai Tao, a reporter with Voice of America, said that the arrest of Lü Xiwen shows that Xi Jinping’s “anti-corruption campaign will continue; and the depth and the scale of the campaign will be wider and deeper than before.”

Hai continued: “Why is that? If the purging stops that means you take a step back. And once you take a step back, you cannot control the previously purged tigers. And even if you want to maintain the current stalemate, the [anti-corruption campaign] must continue.”

Chinese political commentator Shi Jiutian told Chinese language Epoch Times that it would take time to know whether the arrest of Lü was an indication of a wider purge of a Beijing clique, like the political networks in the coal-rich Shanxi Province and the prosperous coastal region of Jiangsu.