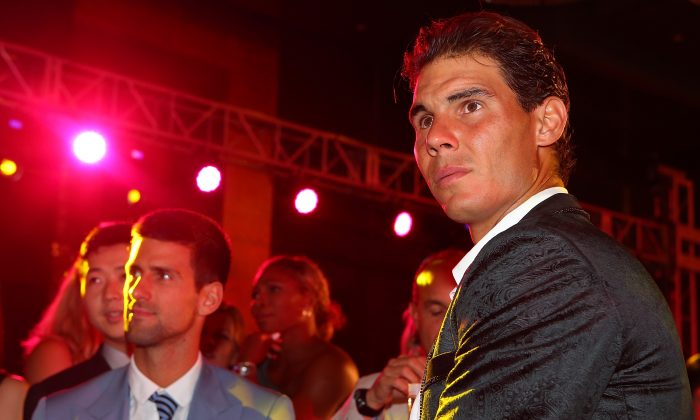 Beijing, The Capital of The Asian Tennis Swing Tour 2014

BEIJING— The WTA and ATP tour has moved on to Beijing for the China Open 2014. It is going to be a long week, not only for the players but also for all of us here at the media room, reporting from the China Open. Matches are being played at the same time, over six courts starting in the morning and finishing late at night.

I suppose having a late night downtown Mexican dinner with a glass of margarita and 10 other female tennis players, doesn’t help me to feel better, but it was definitely worth it for getting the inside information on the professional tennis tour life. The next day at the breakfast, you could feel the energy and the good vibes coming from both, female and male players at the tournament. It was time for some serious tennis.

First rounds were played on the weekend and this week will be offering the tennis fans around the world lots of excitement, as the men are chasing points to reach the World Tour Finals at London’s O2 Arena in November and women chase points to qualify for the WTA Finals in Singapore.

Roger Federer, Novak Djokovic and Rafael Nadal have already booked their tickets to the English capital and Nadal’s fans can relax, as the ‘warrior’ in the tennis game, is back for the Beijing Open and making his first appearance. After nearly missing 3-months of tournaments and competitive play, due to a wrist injury, he says that he’s in good condition to compete again, in the city where he had his most unforgettable moment, winning the 2008 Olympic Games.

Cilic is playing his first tournament since capturing a maiden Grand Slam title at the US Open on September 8. The Croat who turned 26 on Sunday and had a big meal with four birthday cakes, looked fresh and confident against the Wild Card, Yan Bai from China by winning 6-3 6-4. Later at the press conference, he talked about how he doesn’t want the win of a Grand Slam to change him much, as he already achieved his goal in tennis, of playing more relaxed and having more fun on and off the court. He hopes to qualify for London and become the first Croat to earn a singles spot at the World Tour Finals since Ivan Ljubicic in 2006.

As for the ladies, four singles players, Serena Williams, Maria Sharapova, Simona Halep and Petra Kvitova, have qualified for the BNP Paribas WTA Finals in Singapore and Ana Ivanovic who won her first round match today, is right behind them. Ivanovic, a favourite among the local crowd, leads in the most WTA wins this year, with 53 matches won. She played the 2nd-youngest player in the draw, Belinda Bencic from Switzerland and took the match by hitting winners all the way from the baseline and overpowered the young Swiss with 6-2, 6-1.

Serena Williams won her 1st round match against Silvia Soler-Espinosa from Spain with 7-5, 6-2 after starting slowly and being quickly down 5-0. She didn’t want to lose the set with no games won, so she fought back to win seven games in a row and take the first set. A viral illness made her pull out from her match during the Wuhan Open, last week but she seems to have recovered well and moved well today. Her sister, Venus Williams seemed to have found her game after a slow start. The 16th seeded Venus defeated Great Britain’s Heather Watson 6-3, 6-1 to move on to the second round of the China Open.

Maria Sharapova played very aggressive in her 1st round match against Kaia Kanepi from Estonia and took the match 6-4, 6-1 scoring five aces. She will take on Elina Svitolina (No. 34) who is coming off of a big win over Angelieque Kerber (No.8) at the Wuhan Open. Sharapova and Svitolia have not met before in competition.

The last year finalist and 2008 champion of the China Open, Jelena Jankovic was defeated by Alize Cornet from France with 5-7, 6-3, 6-4. The French woman has defeated Serena Williams three times this year and is a fierce fighter, as shown against Jankovic in today’s match. The points were long; Cornet was running after every single ball, stretching herself like a ballerina on the tennis court and encouraging herself in her native language. It was a tough match that went in her favour. After losing the second set, Cornet got back into her game by winning 4 games and at 4-2 Jankovic looked like she was on the ropes. Another huge win for Cornet with many more to come from this player.

It wasn’t yet the end of the day for the tennis fans and plenty more matches were to be played but I was invited to the player’s party. I am always amazed how fast the athletes change their sporting clothes into a fancy dress for the night. It was a very classy evening with great food, drinks and lots of catching up to do. Serena Williams as well as Rafael Nadal won the media’s best-dressed award for the night. The night finished with a performance of the Beijing Opera and lots of wine for the players who were already out of the tournament, while the rest of the players were finishing off their night matches.