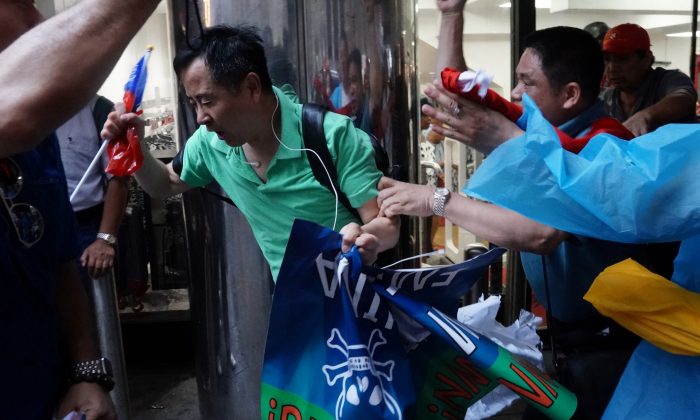 Pro-China and Pro-Taiwan supporters engage in scuffles outside Grand Hyatt hotel, where Taiwan's President Tsai Ing-wen is supposed to stay during her visit to the U.S., in New York City, U.S., on July 11, 2019. (Carlo Allegri/Reuters)
NY News

Waving red China flags, opponents of Tsai chanted slogans and broke into fights with Taiwan supporters in front of the Grand Hyatt hotel in Manhattan, where she was due to stay for two nights while on her way to visit several Carribean nations.

Video footage from the scene showed China supporters attacking their opponents and attempting to forcibly occupy the space where they gathered.

Taiwan is a self-ruled island with its own democratically-elected government, currency, and military. The United States is one of its chief backers and supplier of arms.

But Beijing considers Taiwan part of its territory and has threatened to use military force to one day unite the island with the mainland.

On July 11, those who supported Taiwan and its democratic values, and those who believed Taiwan belonged to the Chinese Communist Party (CCP), both showed up near the Manhattan hotel.

One man in a white T-shirt and sunglasses was arrested and taken away by police after trying to kick a pro-democracy protester, who tried to avoid him but was attacked by two other China supporters, who kicked him and struck him with flag poles they were holding. It is unclear whether he was formally charged.

“The guy who was arrested also gave me a kick. They were very aggressive,” Yuan Zhe, a member of the Democracy Party of China who was at the scene, told the Chinese-language Epoch Times. The pro-democracy group and several other Chinese dissidents had used a speaker to chant slogans against the CCP. Several pro-China protesters snatched away their speaker, Yuan said. “They were on the other side while we were on this side. Then they just ran over to hit us, because we support President Tsai Ing-wen.”

Another pro-democracy protester who was in the pro-Taiwan contingent said: “When they came to attack us, they did it in a sneaky way: some people out in the front while some from the side.”

The banners that the pro-China side held identified themselves as members of various Chinatown organizations that exert an influence on overseas Chinese communities.

Billed as hometown organizations for Chinese immigrants, they are a key element of Beijing’s United Front Work Department. This CCP agency is in charge of spreading the Party’s agenda within China and abroad.

The United Front operations manual explicitly states that its goal is to bring overseas Chinese under its control by emphasizing “flesh and blood” ties to China, according to a 2018 report on China’s influence operations published by the Hoover Institute (pdf).

“Officials from Beijing have stated clearly that they do not view overseas Chinese as simply citizens of foreign countries, but rather as ‘overseas compatriots’ who have both historical connections and responsibilities … to support the PRC’s [People’s Republic of China] goals and the ‘China Dream,’” the report stated.

The Fukien Benevolent Association of America, also known as Fukien American Association, is one such pro-Beijing organization based in New York City.

“The United States is at the frontlines for overseas Chinese to counter [Taiwan’s] ‘independence’ and promote unification,” it states on the “About Us” page.

The group also claims that its “firm and unyielding” push for Taiwan’s assimilation with the mainland have earned it high acclaim from the Chinese government.

Tsai is on a four-country visit to Taiwan’s allies in the Carribean. Her transit time in the United States—which will include a stopover in Denver, Colorado on her way back to Taiwan, longer than past presidents’ stays—has angered China.

At a July 12 press conference, China’s Foreign Minister Wang Yi urged U.S. officials not to allow Tsai’s transitory stay and warned that the U.S. recent $2 billion arms sale to the island was “play[ing] with fire.”

The Taiwan president has maintained a defiant tone in the face of China’s open threats.

“I want to reiterate that Taiwan is not, and will never, be intimidated,” Tsai said during a July 11 meeting in New York City with United Nations representatives of countries who are Taiwan’s diplomatic allies.

El Salvador was the latest country to have broken off diplomatic ties with Taiwan, after Beijing’s consistent efforts to pressure the island’s allies into switching their recognition to China.

Taiwan’s roster of allies has dwindled down to 17.

“The challenges we face only serve to strengthen our resolve to engage with the international community,” Tsai said. “The 23 million people of Taiwan have a right to participate in international affairs and this right should not be subject to political preconditions.”

Before embarking on her trip, Tsai said on Thursday in Taiwan that she hoped to spread the island’s values of freedom and perseverance with international friends.

“Our democracy has not come easily and is now facing threats and infiltration from overseas forces,” Tsai said, alluding to the CCP, adding that the threats are “also common challenges faced by democracies all over the world.”

Lin Dan contributed to the report.