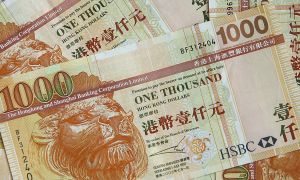 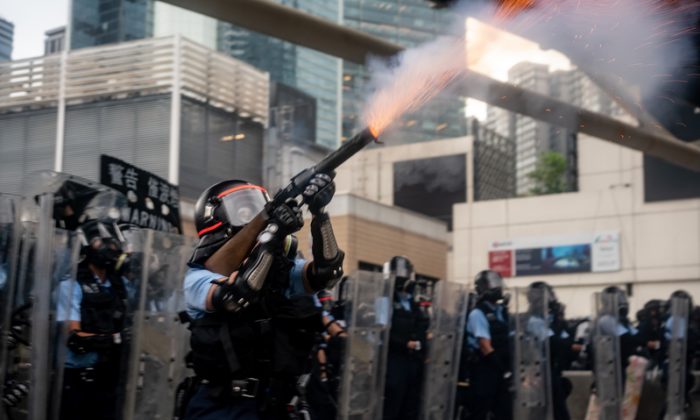 A police officer fire teargas during a protest in Hong Kong, China on June 12, 2019. Large crowds of protesters gathered in central Hong Kong as the city braced for another mass rally in a show of strength against the government over a divisive plan to allow extraditions to China. (Anthony Kwan/Getty Images)
Hong Kong

Hong Kong’s chief executive Carrie Lam tried to defend her government in the face of public condemnation over the brutal crackdown of peaceful demonstrators who oppose the proposed amendments to the extradition law. In a recent interview, she compared herself to a loving mother and the one million protesters to “wayward children”—a type of communist propaganda to describe the relation between the state and its people.

During a morning interview on June 12 with TVB, a Hong Kong-based pro-Beijing TV station, Lam insisted that the Hong Kong government has been doing the right thing from the beginning. She compared herself to a loving mother and the one million protesters to misbehaving children who cry and scream to demand what they want.

“A good mother will not pamper a wayward child. Similarly, the Hong Kong government insists on passing the extradition bill because wayward children should not be pampered,” she said in tears.

Lam also accused the protest of being a “riot” that any civilized society would not tolerate. However, she made no mention of police attacking the unarmed demonstrators with tear gas, bean bags and rubber bullets.

On the same day, an online petition to oppose Lam’s “mother” statement was launched by more than ten female scholars, including Susanne Choi, a professor of Sociology at Chinese University of Hong Kong (CUHK), barristers Linda Wong and Debora Poon, and Eva Chan, a senior lecturer at the School of Journalism and Communication of CUHK.

The petition letter read: “We are a group of mothers from Hong Kong, but we absolutely will not use deadly weapons such as tear gas, rubber bullets, or bean bag rounds to attack our children. We also find it difficult to see how someone can be indifferent and apathetic to images of young people being beaten with batons, and suffering from serious and bloody wounds.”

“After all, the citizens of Hong Kong are not your children—what the people need is not your handouts, but, instead, what they need is for you, the head of this city and a civil servant, to listen to views from all sides of society, and to make appropriate and timely responses,” the letter continued.

The group stated that as mothers, they strive to build a better future for their children, a future where their children can live in their homeland “free from fear.” They said to Lam: “Stop hiding behind your false political sob story to gain our sympathy—we want you to take action to show that you truly care about our younger generation.”

The analogy that compares a government or a top politician to the parent of the people is a typical propaganda in communist countries.

In the 1980’s, a middle-aged intellectual named Qu Xiao quickly became a household name and an oral agitator in China. The Chinese authorities were truly delighted with his charisma and special talent in persuading his audience to continue to love the Chinese Communist Party (CCP), even if they were victims of the Cultural Revolution (1966 – 1976).

Qu was a victim of the Cultural Revolution himself— he was “re-educated” as a farm laborer during his entire youth and wrongly labeled as a counter-revolutionary. In his public speeches, he gave an emotional account of his tragic experiences, but always defended the CCP: “But, the Party is our mother. A child will not and should not bear grudges against his mother, even if she has wrongfully beaten him!”

Qu met his own demise when the Chinese authorities sent him to the United States in 1991 to do the same political preaching to Chinese students studying there.

Among the audience in his first talk, there was a pro-Beijing Taiwanese professor, who used to detest the Kuomintang (KMT) because he thought the KMT’s media reports about the CCP’s atrocities was fake news as they seemed to be too inconceivable to be true.

At the end of Qu’s talk, the Taiwanese professor stood up and told the audience he had realized how wrong he was in the past. “Professor Qu’s speech was like a damning confession, with blood and tragedy in every line. A young scholar was thrown in prison for 22 years for no reason at all. I had seen similar reports when I was in Taiwan, but none were as evil and outrageous as this!” he said emotionally.

He then criticized Qu: “You said the Party was your mother. But how could you still call her a mother after she abused her children like this for such a long time? Even a stepmother wouldn’t be so cruel. Does she still have the right to demand loyalty from a child maltreated by her? In any civilized country, a mother who abuses her child like this would be punished by the law.”

At this point, Qu and a Chinese official from China’s Foreign Ministry, who accompanied him on the tour, decided to cancel future talks abroad. They returned home immediately.

After returning to China, Qu seldom appeared in public. In the middle of a speech in Nantong City in 1991, he had a stroke and fell from the podium. Half of his body was paralyzed, and he lost the ability to speak for the rest of his life.