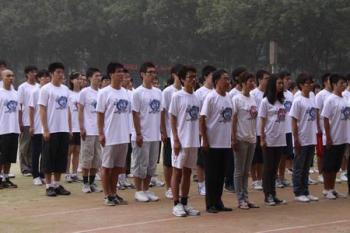 Xue Fei
View profile
Follow
biggersmaller
Print
University students are being threatened with forced labor and expulsion from school should they complain too loudly about strict parade drills being forced upon them, reports say. As Beijing authorities gear up for the 60-year celebration of the Chinese Communist Party seizing power, they are anxious to keep a lid on any simmering tensions.

Some Beijing students burned their uniforms in public and refused to endure the drills for the upcoming Oct. 1 parade, according to a recent article in Hong Kong’s Chengming Magazine.

The regime reacted by imposing a strict information blockade and threats of punishment. The National Security 14th Bureau, the organization specializing in monitoring universities, is investigating the incident, the article said.

“It’s over 35 degrees C (90 F) in Beijing’s summer days,” complained one student blogger. “Who would want to be drilled for three months under the baking sun just for a mere three minutes in Tiananmen Square?”

The blogger posted the message before the summer break, saying that the students in his school were very angry because school authorities had threatened them with losing the chance to study abroad or receive a scholarship if they refused to show up for the drills.

Other student bloggers complained the university demanded that students wear suits for the drills, and school teachers threatened them with a zero score if they quit the drills.

Students were quoted in the Chengming Magazine saying, “You children of high-officials, enjoying to the fullest a 60-year legacy, when have one of you done exercise drills in the intense summer heat? Why do you instead debase us, forcing us poor people to eulogize the capitalist rich and powerful?”

Radio Free Asia (RFA) also reported on July 4 that some university and middle/high school students in Beijing had expressed their anger because they were forced to participate in the drills and their plans for summer vacation were ruined.

Democracy activist, Mr. Zheng Cunzhu, was a student during the democratic movement in China in the 1980s and currently lives in the U.S. He told RFA that the students' complaints reflect the awakening to the Chinese regime's nature. “[It] is a dictatorial regime, and such a government, [with] such values, and the current society, have no attraction to students who are rational and have independent thinking,” he said.

One blogger stated that after the summer drills, students at Capital University of Business and Economics only rested for one day before the Fall semester started. After school started, students had to participate in the drills from 7 a.m. to 10 a.m. and also after school. The blogger called for students to strike against the scheduled drills.

One student’s parent Mr. Zhu from Guangdong Province commented that forcing student into the parade was a human rights violation. He called for the Beijing authorities to cancel the compulsory drills and let students make their own decision after summer vacation is over.

It was reported earlier that students of the Gengdan Institute of the Beijing University of Technology also protested against the forced National Day parade rehearsal. The school confirmed that students had indeed “made some noise,” and it had promised students they would have a two-week break. However, some students said they still did not wish to participate in the rehearsals.