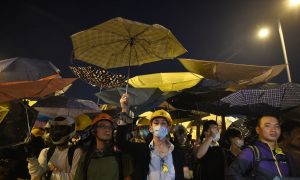 Battle Over Road Ends in Arrests, Clearance in Hong Kong
0 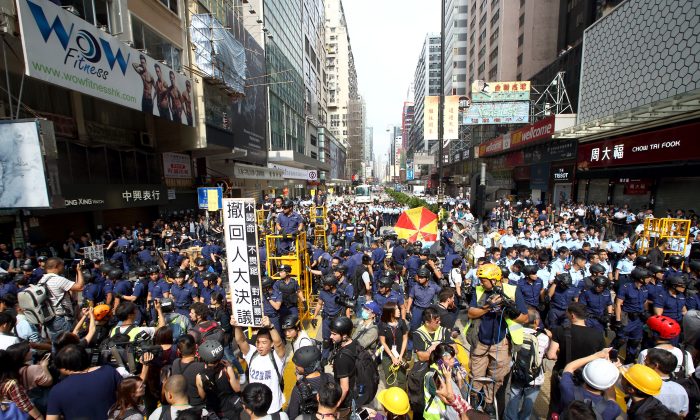 During police clearance of the Mong Kok protest site, a protester in white tee-shirt is holding a placard demanding the authority to take back NPC’s decision on HK universal suffrage, Nov. 26, 2014. (C.S. Poon/Epoch Times)
China

Beijing Struggles to Reach a Decision About Hong Kong

As the Hong Kong government continues to clear democracy protesters from the streets, drawing the world’s attention to the Umbrella Movement, Beijing faces the problem of how to handle the anger in Hong Kong over the denial of universal suffrage.

On Nov. 25, Wall Street Journal quoted news sources saying that Beijing authorities are discussing how to respond to the Hong Kong public’s dissatisfaction with the reform package that stated how Hong Kong’s next chief executive would be elected.

The reform package resolution was passed on Aug. 31 by the National People’s Congress (NPC) Standing Committee and states that Hongkongers can elect their chief executive with universal suffrage as long as the candidates are chosen by a nominating committee. The nominating committee in question is largely controlled by Beijing.

This decision provoked widespread anger in the Hong Kong public, who viewed it as blocking them from true universal suffrage and democracy. The event triggered tens of thousands of students to protest in Hong Kong on Sept. 22 and the start of the Umbrella Movement for democracy on Sept. 28.

According to WSJ, the Beijing authorities’ decision would include adjusting the composition of the chief executive nominating committee to make it better reflect public opinion, especially the voice of pan-democrats. However, the decision must also ensure that Beijing continues to control the elections.

The two factions of the Chinese Communist Party, one headed by current Party leader Xi Jinping and the other supporting former leader Jiang Zemin, have delivered conflicting messages on how the Party is planning to handle Hong Kong.

Hong Kong Chief Executive Leung Chun-ying, also a Jiang faction supporter, has declared that dialogue with the protesters must be carried out under the framework of the NPC. In response to the Umbrella Movement, Leung said he was “willing to have dialogue with anyone who is in accordance with the provisions of the Basic Law and the resolution of the NPC.”

Xi Jinping, on the other hand, has never mentioned the NPC’s reform package in public since it was made.

On Sept. 22, Xi held a high-profile meeting with over 70 Hong Kong businessmen in Beijing. Xi said in his speech that there would be no change to the “one-country, two-systems” policy that gives Hong Kong a high degree of independence from China.

In Beijing on Nov. 9, Xi met Leung Chun-ying, who was attending the APEC summit. Xi started their talk with a request for a comprehensive and accurate understanding of the “one-country, two-systems” principle and the Basic Law, to support the development of democracy in Hong Kong under the legal system.

In Xi’s public speeches and the subsequent reports by official Party media, there has been no mention of either the reform package or the White Paper made by the Jiang faction earlier this year that stated Hong Kong only has as much power as Beijing is willing to give it.

The NPC has gradually become an anti-Xi Jinping base. On Sept. 30, Li Shenming, deputy director of the Standing Committee of the NPC, published an article in Party mouthpiece newspaper People’s Daily with an implied threat to Xi. Li quoted former Party leader Mao Zedong in the article: “Our chairman cannot dissolve the National People’s Congress; on the contrary, the NPC can remove the chairman from office.”

Sources in the Party have said that Zhang Dejiang intended to solidify the power of the NPC and prevail over Xi by disturbing Hong Kong’s situation, using the Aug. 31 reform package resolution to create trouble for Xi.

The sources reported that Xi has almost full control of the army since the Party’s fourth Plenary Session in late October. It is expected that once he fully controls the Central Military Commission, Xi will move against Zhang, and the situation will change dramatically.

Washington-based China expert Shi Cangshan said that Xi’s officials have apparently not changed the NPC’s resolution and have not made Leung Chun-ying step down according to Hongkongers’ wishes. However, Shi pointed out that sources have said Xi would expand the make up of the nominating committee, which would in fact change the NPC’s resolution.

According to Shi’s analysis, the Party is horrified that the struggle for democracy in Hong Kong has created an obstacle against the Party. In addition, mainland Chinese people are supporting the Umbrella Movement and continuing to speak out, which is a major blow to the Party.

The Chinese Communist Party has actually been forced to compromise. Shi believes that a lot of major policies will be changed gradually after this.