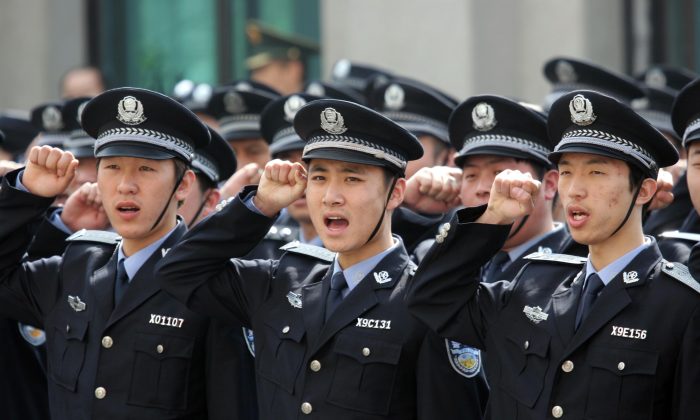 Police officers salute the flag of the People's Republic of China in 2011 in Liaoning Province. The Communist Party has recently launched a new mobilization campaign that will strike hard against perceived enemies of social order. (ChinaFotoPress/Getty Images)
China

Before a major political meeting to be held in Beijing next month, the Chinese Communist Party has launched a new campaign aimed at striking hard against those who might protest its rule, according to internal documents obtained by Epoch Times. The campaign, which is likely to be instituted in various ways across the country, will involve police mobilization, household visits, arrest quotas, ramped up surveillance measures, and strict adherence to Party ideology.

Typical for internal communist security memos, the documents are heavy on warlike comparisons and language. The second page declares, for example: “We must mobilize the troops to battle against all criminal activities, conducting a massive attack. We must conduct landmine warfare, trench warfare, and thoroughly purge all threats to social stability.”

A 19-page directive, dated Sept. 29, first obtained by New Tang Dynasty Television, based in New York, and shared with Epoch Times, lays out the plan for Chaoyang, a municipality of three million people in the northeastern province of Liaoning.

On top of the list of targets for the three-month campaign are practitioners of Falun Gong, a spiritual practice that has been persecuted since 1999.

Party security officials are to stop them from gathering together and sending text messages or making phone calls to inform other Chinese people about the violent campaign that has been waged against the practice. They are also to “dredge out the backbone elements,” and “emphasize house visits on key people.”

Quotas are set forth for arresting Falun Gong practitioners. Domestic security officers, who are tasked with persecuting dissident groups, patrol police, Internet police, detectives, and even traffic police are given such quotas. County-level public security bureaus must “break” at least eight cases, the document says.

Yiyang Xia, the Senior Director of Policy and Research at the Human Rights Law Foundation, a legal organization in Washington, said that the document is “not a persecution of Falun Gong circular, but is part of the social stability maintenance system, among whose tasks suppressing Falun Gong is a priority.”

Notably, the prominent inclusion of Falun Gong material in the document confirms that there has been no change in the Party’s policy of persecution with the installation of the Xi Jinping leadership, despite some apparent diminishment of intensity since 2012.

After setting out the campaign against Falun Gong, the document turns to other targets: petitioners–aggrieved citizens who stage protests outside official buildings, and then actual criminals, such as petty thieves, counterfeiters, pyramid-scheme marketeers, and prostitutes and gamblers.

The first page makes reference to a national public security conference that was held recently, which the memo was to follow up on. The contents of such circulars usually recapitulate the political directives and goals set down at the level of the Party Central, according to Xia, the researcher. Usually documents of this kind are then replicated in Public Security Bureaus at provincial, city, and county level across the country, as each department prepares to carry out the campaign in their own area.

In this particular case, Xia said, it is likely that the Political and Legislative Affairs Committee, which controls the Party’s security apparatus, signed off on and instigated the campaign. The agency is currently headed by Meng Jianzhu, a member of the elite Politburo.

Over a dozen mobilizations are made for large groups of “people’s police”: one group to “get into the community,” another to carry out the “grand visiting plan,” another to conduct oral agitation.

The “grand visiting plan” refers to police knocking on people’s doors and, ostensibly, attempting to resolve their disputes with the regime before they resort to street protests.

Mobilizations of this nature are often known as “strike hard” campaigns, and, as part of the Communist Party’s modus operandi for its security forces, have been held periodically for decades.

The timing of the campaign is significant: it covers the period during which the Communist Party’s Third Plenary Session will be held in Beijing, when a set of new economic reform policies are expected to be unveiled. Party leader Xi Jinping has also been waging a high-profile campaign against corruption in the Party, and the meeting will be another opportunity to put his stamp on the Party’s policy direction.

“The Third Plenum will be a big fight in the Party leadership, so no matter how bad the situation inside the Party is, they don’t want more protests,” said Yiyang Xia. “Basically it’s about confidence. They think they have enemies everywhere, and they have no confidence.”