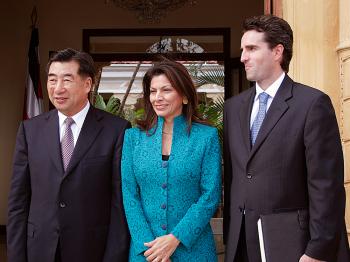 The new kid on the block challenging old regional assumptions, China, has been pouring money into Costa Rica since June of 2007. The change came after the Central American nation broke nearly 60 years of diplomatic relations with Taiwan.

China’s successful courtship of Costa Rica might seem like a side note on the stage of international affairs. But the red carpet treatment the Chinese are receiving these days in Costa Rica and elsewhere suggests that a significant regional power shift may be underway.

It’s a measure of just how much the world has changed since the Cold War, when the United States pumped hundreds of millions of dollars in economic and military aid into Central America, vowing to “draw the line” against Soviet-sponsored “communist expansion” in the hemisphere. With U.S. policy now largely focused on the Global War on Terror in the Middle East, China is using its newfound economic clout to forge new friendships among America’s closest neighbors.

Earlier this year, a delegation headed by China’s vice premier of agriculture, Hui Liangyu, was in Costa Rica’s capitol of San Jose for a formal visit with the nation’s leaders. Several joint agreements were inked, money was promised, and there was much posturing for the cameras. Hui and his entourage were also warmly welcomed by Costa Rica’s president, vice president, minister of foreign affairs, and leadership from the National Assembly, who spoke of China as an “exotic” place.

The visit was touted by the Costa Rican government as the highest-level Chinese delegation to yet visit the country and the overall tone of public discussions was anticipatory. Both countries were intent on reiterating that their new relationship is seriously ramping up—and quickly.

A 10-million dollar cash donation, the expansion of a scholarship program for Costa Rican students to study in China from 20 to 40 scholarships, and the donation of 200 police cars for public security figured among the agreements signed.

A deal was also struck on water resource management, and officials initiated conversations about future free trade agreements. In total, the whirlwind trip led to the signing of 11 documents in the areas of economics, culture, commerce, technology, tourism, immigration, diplomacy, and finance.

Money has also changed hands for a new wing in the national hospital in the neighboring city of San Pedro. The old hospital recently suffered a devastating fire from arson and is in need of other upgrades and repairs.

A New Home for Soccer

Perhaps most astonishing of all the deals made is the plan for China to build a new national stadium in San Jose. Demolition of the old stadium began five days after Hui Liangyu’s delegation visited the country in May.

China is promising $72 million for the construction of the stadium, which will reportedly be built by 800 of its own workers imported for the job. They also drew up the plans themselves and have set the timeline for construction, which is due to start in October. According to Daniel Erikson, a Senior Associate at the think tank Inter-American Dialogue in Washington, D.C., it is no accident that China’s first major public works project in Costa Rica is a stadium.

“A national stadium is something the Chinese know how to deliver—they can roll it out,” says Erikson, who adds that building stadiums is a regional diplomatic move that China is fine tuning.

As of last year, China helped build five stadiums for the Cricket World Cup in the nearby Caribbean, pouring more than $140 million and over 1,000 Chinese workers into the construction.

El Estadio Nacional, as the Costa Ricans call their stadium, was aging and badly in need of upgrading. More than that, the project is a very public one that, with the popularity of soccer in that part of the world, and has set locals abuzz with excitement.

Choosing Between Taiwan and China

It is no accident that Costa Rica has emerged as China’s new best friend in the region. For the past several years, a diplomatic and economic tug-of-war between China and Taiwan has been happening.

The island nation of Taiwan, which broke ties with China in 1949 to form its own government, has seen its number of allies around the world dwindle since the President Richard Nixon first established diplomatic ties with the communist mainland in the early 1970s. Today Taiwan has full diplomatic relations with just 23 countries. Latin American nations represent the largest bloc of those allies.

The isthmus of Central America—with its contiguous string of small countries—has long been a bastion of diplomatic support for Taiwan, but observers say China is increasing pressure to isolate Taiwan from its old allies.

“One of China’s top foreign policy goals is the worldwide enforcement of the ‘One China’ policy,” says Erikson of the Inter-American Dialogue. “Reunification of Taiwan with the mainland is practically an obsession with Beijing.”

The playing field in Central America began to shift in China’s favor in 2006, when new governments came to power in Costa Rica, Nicaragua, and El Salvador. The shifts in political alliances that came with the changes in the historically unstable region may have made easy pickings for China. Nicaragua hinted that forming an alliance with China was imminent, but ultimately backtracked and still has relations with Taiwan—for now. El Salvador made strong, public reaffirmations of friendship and cooperation with Taiwan.

But the switch in Costa Rica came after the election of a new president, Oscar Arias, and diplomatic ties were formalized in 2007. The shift in power provided a convenient window for Beijing to move in.

In Nicaragua, where the Taiwanese flag still flies at the embassy in the national capitol of Managua, Taiwanese officials express confidence in their position. According to Pablo Hui, a press officer at the Embassy of Taiwan, the relationship is based on strong technical agriculture and farming projects.

“Taiwan and Nicaragua maintain very close domestic relations,” says Hui. “Taiwan offers many projects in the development of rice; we sell wine and vegetables and fruit, and have had very successful results.”

But some are not convinced that Taiwan has the most to offer Nicaragua. Ajax Delgado, a businessman in Managua who sells Chinese-made vehicles, is also head of a business organization that is pushing for formal ties with China.

Delgado, who started his business about four years ago, says he was approached by a Chinese friend with the idea of founding the organization three years ago. The so-called “Association for Friendship with the People’s Republic of China and Its People” is partially funded by President Ortega’s Sandinista government and is linked to former Sandinista commandante Bayardo Arce. The group also has branches in the cities of Leon and Matagalpa.

According to Delgado, there is no room in the organization’s mandate to worry about the consequences of establishing formal relations with mainland China.

“We know there are problems with Taiwan and China,” says Delgado. “Our position is that we want to have relations with China. The reality of Nicaragua is that we are a poor country and we need to consider which government is the best for us to establish diplomatic relations with.”

Costa Rica’s economic, political, and domestic stability in an historically volatile region could make China’s presence there a perfect showcase for other countries.

Despite Taiwan’s long-standing presence in the region, the battle for establishing or maintaining relations could come down to simple numbers.

“China is trying to make Costa Rica into a model for other nations [in Central America],” says Daniel Erikson at Inter-American Dialogue. “Costa Rica could be a launching pad for wooing over the rest of Central America.”