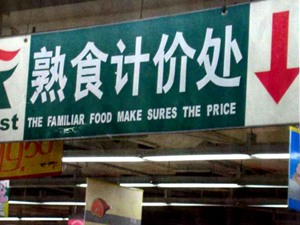 A sign at a train station in China reads “Fire Car Station,” while another sign at the pharmacy of a hospital in Beijing reads “Western Pharmacy.” What's more, a sign at the cashier of the cooked food section in a supermarket reads “The Familiar Food Make Sures the Prices.”

It is not uncommon to see such “Chinglish” on various signs at China's airports, highways and public facilities. When seeing it on signs at shopping centers or in small shops, tourists are often bewildered by the meaning of the signs or burst into laughter when they recognize the true meaning of the phrases.

In 2002, the Beijing Bureau of Tourism set up a hotline for visitors and residents to report examples of bad English in public places. The hotline, however, has met with little success. In the run-up to the 2008 Beijing Olympics, Beijing municipal authorities recently launched a new drive to eliminate bad English displayed on public signs.

For the next eight months ten review groups for standardization in English language will inspect signs in public places including parks, museums and subway stations. The objective of the teams is to pinpoint and correct mistranslations.

According to the Guangzhou-based Xunxi Times, some 6300 street signs with bad English in Beijing have been corrected and replaced.

Before the signs were corrected, several Chinese and international websites had already poked fun at the “Chinglish”:

For instance, “Employees Only” was mistranslated variously as “Tourist Stops” and “No More Steps,” while “No Diving” was mistranslated as “No jumping water.” The person who submitted the photo joked, “Perhaps the water should stop jumping around.”

At one Beijing used car lot, an “Exit” sign reads “Export.” Such a mistranslation suggests that all who shop there should be regarded as commodities and exported overseas.

While entering a shop with a sign reading “Ants and Crafts,” I was surprised to find that what were sold there were “Arts and Crafts”. The sign makers had mistakenly printed “ant” instead of “art.” At several parking lots, “Parking” has been mistranslated for “Park.”

“I think it is good to stamp out Chinglish,” said a graduate from Beijing University “Without the corrections, both international visitors and Chinese will be confused. We could become the butt of many jokes if corrections are not made before the 2008 Beijing Olympics.”

One university junior commented that in light of the fact that the 2008 Beijing Olympic Games will be attended by international audiences, “Chinglish” should be eliminated. Otherwise, China could be embarrassed.

“With so many high ranking officials living in Beijing plus the presence of prestigious schools such as Beijing and Qinghua Universities there is no excuse for continued bad English,” said the student. “Perhaps, with the Olympic Games coming to Beijing, the Chinese authorities could milk the common people dry for their personal and party gains by correcting and replacing signs that intentionally used bad English.”

“The drive to clamp down on bad English is nothing more than a superficial formality,” said a retiree in Beijing. “There are more important issues in China such as human rights issues, environmental pollution and traffic congestion, among others. Regardless of the fact that large numbers of people are unemployed, many individuals just want to use the upcoming Olympic Games as an opportunity to build their own services or make more money for themselves. This self-centered mentality has been prevalent in China since the Chinese communist regime took power in 1949.”

Fan Shouyi, Chairman of the Department of English and International Studies at the China Foreign Affairs University, expressed his opinion on the issue during an interview with the Huaxia Times.

“Signs written in English should be consistent with international practices,” he said. “There is no need to translate signs unique to Chinese society such as “No Spitting,” “Please stand in line,” etc. Most international visitors inherently conform to such established rules of social behavior. If they are translated into English, they could become punchlines for embarrassing Chinese jokes on the Internet.”