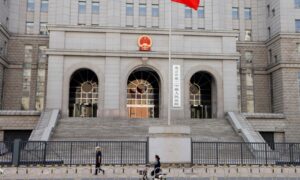 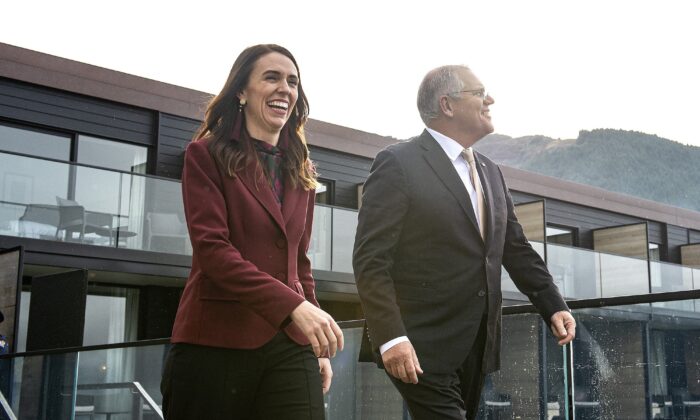 New Zealand's Prime Minister Jacinda Ardern (L) walks onto a balcony at the Nest with Australia's Prime Minister Scott Morrison ahead of the Australia-New Zealand Leaders' Meeting in Queenstown on May 31, 2021. (Joe Allison / Pool / AFP via Getty Images)
Chinese Regime

Beijing has reacted defensively to the unified posture of the prime ministers of Australia and New Zealand (ANZ) towards the Chinese regime after they expressed “grave concerns” about human rights in the Xinjiang region of China, the limiting of rights and freedoms in Hong Kong, and more.

This comes after Australian PM Scott Morrison and New Zealand PM Jacinda Ardern released an extensive joint statement after their Annual Leaders’ Summit in Queenstown, New Zealand, which followed months of scrutiny about their different approaches to Beijing, with Ardern’s being described as “too subtle” by one expert.

“The Prime Ministers expressed deep concern over developments that limit the rights and freedoms of the people of Hong Kong and undermine the high degree of autonomy China guaranteed Hong Kong until 2047 under the Sino-British Joint Declaration,” the statement read.

Beijing is considered to have breached this arrangement last year when it imposed the National Security Law on Hong Kong. Since then, pro-democracy activists have been arrested and sentenced to jail terms, and countries like Australia and the United Kingdom have offered means for fleeing Hong Kongers to gain visas.

“The Prime Ministers also expressed grave concerns about the human rights situation in the Xinjiang Uyghur Autonomous Region and called upon China to respect the human rights of the Uyghur people and other Muslim minorities and to grant the United Nations and other independent observers meaningful and unfettered access to the region,” the statement read.

Wang claimed that the Chinese regime’s actions in Xinjiang—which have been labelled genocide by some countries—were about “counter-violence, anti-separatism and de-radicalisation” and not “human rights, ethnicity, or religion.”

He also said Hong Kong’s issues were “purely China’s internal affairs,” and rejected “external interference” which he said comes “under the guise of human rights,” and dubbed them “irresponsible remarks” and “groundless accusations.”

However, James Laurenceson, director of the Australia-China Relations Institute at the University of Technology Sydney, said these remarks don’t present an image of China that is confident and comfortable with itself.

“I struggle to see how simply making a statement on Xinjiang, Hong Kong, or the South China Sea can be construed as ‘grossly interfering in China’s internal affairs,'” he told The Epoch Times via email on June 1.

“Beijing is, of course, free to respond to such statements in the hypersensitive way it has taken to doing so,” he said. “But that will generate its own pushback from abroad as other countries update their assessments regarding what a region in which China looms larger will mean for their interests.”

The ANZ prime ministers statement affirmed the need to uphold sovereignty in an “era of increasing strategic competition” between the United States and China.

They also warned against actors seeking to divide the Tasman allies by creating “points of difference” between them.

“The prime ministers reaffirmed their resolve and shared respective approaches to countering foreign interference and agree the importance of building resilience across all sectors of society, including in education, infrastructure, research, electoral processes, media and communities,” the joint statement read.

They also expressed concerns over Beijing’s increased militarisation of the South China Sea, underscoring the importance of freedom of navigation and overflight, and that maritime zones must accord with the United Nations Convention on the Law of the Sea (UNCLOS).

“The Prime Ministers reiterated the importance of the South China Sea Code of Conduct being consistent with international law, particularly UNCLOS; not prejudicing the rights and interests of third parties, and supporting existing, inclusive regional architecture,” the statement read.

Beijing denied these assertions, once again calling them “groundless.”

David Capie, director of the Centre for Strategic Studies at Wellington’s Victoria University, told News Corp’s The Australian the joint statement demonstrated a shift in Ardern’s positioning and that both leaders understood that there was no benefit in highlighting their differences on China.

“I think you would have to conclude there has been some movement on the part of New Zealand,” Capie said. “There’s more of the language of a ‘free and open Pacific’ than we’ve seen from New Zealand governments in the past.”

The ANZ governments’ different approaches came under scrutiny in January when NZ Trade Minister Damien O’Connor suggested that Australia should “show respect” to Beijing if it wished to emulate the “mature” relationship between NZ and China.