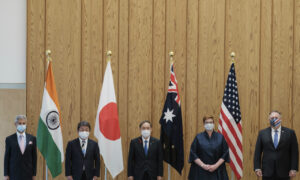 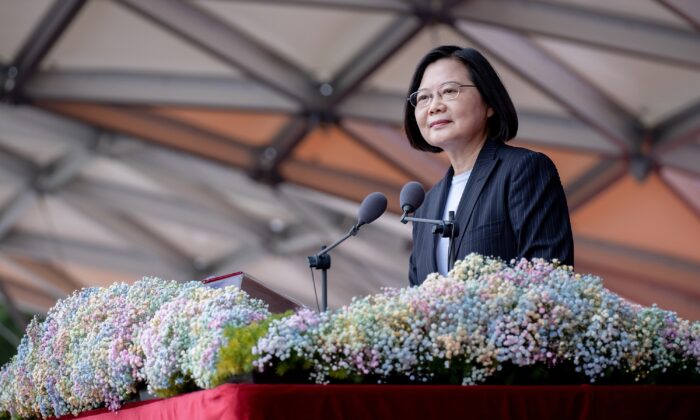 Taiwan celebrated its 109th National Day, which marks the start of the Wuchang Uprising in 1911, which overthrew the Qing Dynasty emperor and established the Republic of China (ROC)—which is Taiwan’s official name.

After the ROC retreated to Taiwan upon being defeated by the Chinese Communist Party (CCP) during the Chinese Civil War, the CCP established a regime called the People’s Republic of China (PRC) in 1949, while Taiwan gradually transitioned to become a democracy. To this day, the Chinese regime has refused to recognize Taiwan’s sovereignty and seeks to bring the island into its fold, by military force if necessary.

In her Oct. 10 speech at the plaza in front of the Presidential Office building, Tsai called for dialogue between Taipei and Beijing and said it was the “joint responsibility” of the two sides to “hold cross-strait stability.”

“As long as the Beijing authorities are willing to resolve antagonisms and improve cross-strait relations, while parity and dignity are maintained, we are willing to work together to facilitate meaningful dialogue,” Tsai said.

In recent months, Beijing has stepped up its intimidation of the self-ruled island by conducting military exercises and sending Chinese military aircraft into its airspace—including on the evening before National Day celebrations and the morning of Tsai’s speech.

Last evening, on the eve of #TaiwanNationalDay, China again sent warplanes to provoke us. But this won’t stop today’s ceremony. It won’t keep us from protecting peace and stability in the region.

In response to Tsai’s speech, Zhu Fenglian, a spokesperson of China’s Taiwan Affairs Office, an agency under the cabinet-like State Council, accused her of having a “confrontational and hostile” mentality.

Zhu demanded that the Tsai administration recognize the “1992 Consensus,” so that cross-strait talks could resume.

The 1992 Consensus was a concept coined after a semi-official meeting between Chinese and Taiwanese representatives in 1992, under which Beijing and Taipei agreed that there is only “one China,” but both sides could interpret what the “one China” is.

The current ruling party in Taiwan, the Democratic Progressive Party (DPP), has refused to recognize the 1992 Consensus because the vague concept has been used by Beijing to assert its claim over the island.

Soon after Tsai took office in May 2016 for her first term, Beijing suspended official communications, as she didn’t endorse the 1992 Consensus.

“The Chinese mainland must maintain strong military pressure, which can be triggered at any time, over the island of Taiwan, to ensure that certain forces on the island restrain themselves,” Hu wrote.

The next day, Chinese state-run media reported that the military would hold live-fire drills on the east coast of Gulei, a town located in Fujian, from Oct. 13 to 17.

Taiwan’s Mainland Affairs Council (MAC), a government agency responsible for cross-strait affairs, in a statement issued on Oct. 10, condemned the remarks made by Beijing’s spokesperson. It called on China “not to misjudge the situation again while creating antagonism.”

In a separate statement, the MAC condemned Hu’s remarks, questioning his motivation for stoking conflict between the two sides.

Beijing “should not allow its state-run media to speak nonsense that drives up cross-strait hostility,” the MAC stated.