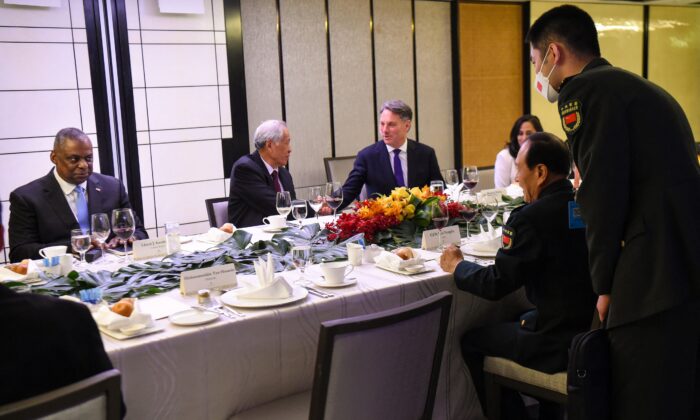 In a snub to Washington, Beijing relegated U.S. Secretary of Defense Lloyd Austin to meet with China’s No. 3 military official.

Burma (commonly known as Myanmar) was excluded because of accusations against the coup leaders for committing crimes against humanity.

The event was called off in 2020 and 2021 due to COVID-19. This year’s Shangri-La Dialogue marked the first meeting between Austin and Chinese Defense Minister Gen. Wei Fenghe.

Technically, Austin should be meeting with the chairman of the CMC. However, Xi has effectively placed himself in the No. 1 position in China’s defense ministry by making himself the chairman. As head of state, Xi would reject a meeting with a U.S. secretary. Therefore, Austin would be relegated to meeting with the No. 2, which is already a bit of a downgrade. However, the Chinese Communist Party (CCP) insisted that Austin meet with Wei, the No. 3 military official.

Chinese officials refused Austin’s calls three times, saying he had committed a “faux pas” by asking to speak to Xu. The CCP refuses to rectify this insult to the defense secretary and the United States.

The power politics of position is just one of several issues putting pressure on U.S.- China relations. The ongoing trade war, China’s increasing militarism, and repeated threats against Taiwan are issues that are becoming harder to mitigate.

In addition to the direct conflicts between the two countries, U.S.-China relations are further strained by the invasion of Ukraine and China’s support for the Burmese military junta responsible for 12,000 deaths since the January 2020 coup.

In her presentation about the Burma crisis at the Shangri-La Dialogue on June 11, the U.N. Secretary-General’s special envoy on Burma, Noeleen Heyzer, stressed the need for a “coherent international response” from the attending nations. This highlights another conflict between the United States and China: the CCP and Russia blocking United Nations resolutions condemning Burma’s military junta.

The United States and other Western democracies have documented the atrocities committed by the Burmese regime, including “drug production and trade, human trafficking, export of timber and other illicit activities,” during the Shangri-La Dialogue.

According to Heyzer, “as of May 26th, more than 1 million people have been displaced in Myanmar … 12,700 houses, religious buildings and schools have been destroyed.”

The CCP, however, continues to trade with Burma’s military government, supporting it economically and securing military access to the Bay of Bengal.

The Chinese regime’s refusal to condemn the Ukraine invasion and its continued support of Russia is another serious point of contention with the United States.

The same is true of Beijing’s behavior in the Indo-Pacific. Austin’s speech at the Shangri-La Dialogue focused heavily on the South China Sea, an issue that directly impacts all ASEAN nations in attendance.

The CCP’s ongoing financial support of the Burmese junta, threats against Taiwan, military expansion into the Indo-Pacific, and support for the Russian invasion of Ukraine are the antithesis of the claims made by Gen. Wei Fenghe in his June 12 speech at Shangri-La. He said, “China’s development is not a threat, but a great contribution to world peace and development.”

While Wei assured the world that Beijing is supposedly committed to supporting peace, Austin confirmed the U.S. commitment to defending the Indo-Pacific and freedom around the world.

“So we’ll keep expanding our consultations with European countries on regional security issues. And we’ll deepen and widen the dialogue and cooperation among NATO and our core Indo-Pacific allies,” the U.S. defense secretary said.