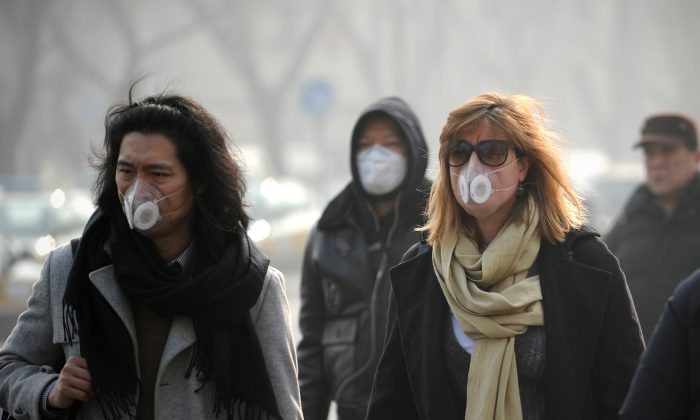 People wearing face masks walk along a street in Beijing on Jan. 16, 2014. Chinese scientists have found 1,315 species of inhalable micro-organisms in the polluted air of the nation's capital city. (Wang Zhao/AFP/Getty Images)
China

Chinese scientists have identified 1,315 different species of inhalable micro-organisms in the polluted air of the nation’s capital city.

Although mostly harmless bacteria usually found in soil, the study samples also yielded viruses and fungi. Some of these microbes are pathogenic, and have been linked with allergies and the spread of respiratory diseases.

The researchers looked at particulate matter smaller than 2.5 microns (PM2.5), that can enter the lungs, and is associated with health problems like “Beijing cough,” as well as particles up to 10 microns across (PM10) They measured microbe levels during a severe week-long smog period in Beijing last January, when the average PM2.5 readings reached over 20 times the guideline limits set by the World Health Organization.

The team found that the concentration of pathogens in the air was greater on days when pollution was higher.

“The purpose of our study was to add to our understanding of the microbes we inhale every day,” study co-author Ting Zhu at Beijing’s Tsinghua University told The Los Angeles Times.

Zhu added that the findings do not show whether the microbes were “still viable,” but that he hopes they will encourage more research that “will eventually lead to better understandings of the microbes in PM pollutants and their health effects in many different places.”

He continued: “I think it is too early to make too many conclusions about the health effects of the airborne microbes.”

The study was published in the journal Environmental Science and Technology on Jan. 23.