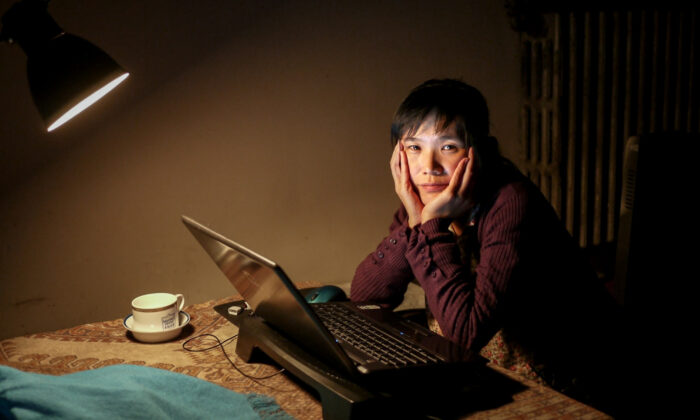 A Beijing court has sentenced a Falun Gong practitioner to eight years in prison as the 2022 Winter Olympics approach.

The heavy-handed sentence again spotlights the Chinese Communist Party’s (CCP’s) human rights violations as the regime seeks to exalt its political image during the upcoming Games, according to Wu Shaoping, a Chinese human rights lawyer in the United States.

“The International Olympic Committee should open its eyes to the current situation of human rights in China under the Chinese Communist Party and should not continue to cooperate with it,” Wu told The Epoch Times.

“This is a shame for the IOC.”

Xu Na, a 53-year-old still-life painter from Beijing, is one of the 11 Chinese citizens who were detained in July 2020 for providing photos and information to the Chinese-language edition of The Epoch Times during the early COVID-19 outbreak in China.

All of them are Falun Gong practitioners. Falun Gong is a spiritual discipline based on the core tenets of truthfulness, compassion, and tolerance, and about 70 million to 100 million people were practicing it in China in 1999. At that time, the Chinese regime deemed the practice’s popularity a threat and launched a nationwide persecution campaign to eradicate it.

“Xu Na and others are not only innocent but also meritorious,” said her defense lawyer, Xie Yanyi, who was blocked from defending his client at the trial on Oct. 15, 2021.

Xu had been held in a local detention center pending trial for more than a year since the 11 were arrested. She was sentenced only three weeks before the opening of the Winter Olympics.

The court sentenced Xu on Jan. 14 to eight years’ imprisonment—the longest term of the 11. The others were sentenced to between two and five years, according to her representative lawyer.

The communist iron fist had already torn Xu’s family apart 14 years before, as the world geared up for the 2008 Games.

Beijing police arrested Xu and her husband in January 2008 using the excuse of an “Olympic check.”

Her husband, Yu Zhou, a folk musician, was tortured to death for his belief within two weeks of his detention, at the age of 42. Xu wasn’t allowed to attend his funeral and was later sentenced to three years’ imprisonment.

What happened to this couple should be more than enough to raise international awareness, Wu said.

Beijing is the first city to host both the Summer and Winter Games, despite international calls for a full boycott over the CCP’s abysmal human rights record, which should disqualify China as a host country.

“Every injustice in this world, even if it is far away, is still relevant to you, because it is always torturing your conscience,” Xu wrote in a personal statement.

She can’t forget the terrible pain she experienced during her prolonged detention in Beijing, she said in the statement, recalling the dark days she went through.

“It makes living worse than dying,” Xu said about the first five-year detention she endured, beginning in 2001. Then 32, she suffered cruel torture many times. She has spent about 10 years in total behind bars.

“How I wished I were in Auschwitz instead of a Chinese prison. In the Nazi gas chambers, one could die quickly,” Xu said in the statement. “The purpose of the Nazis’ [crime] against humanity was to destroy the Jewish body, while [the CCP’s] purpose is to destroy the human spirit, the conscience.”

When she refused to give up her faith under torture, a police officer told her in a serious manner, “I should apply for a craniotomy and remove your brain.”

The U.S. State Department has expressed concern for the 11 Chinese citizens, including Xu, in an email to The Epoch Times last August.

“The United States calls on the [People’s Republic of China] government to release journalists and their contacts detained for their reporting on COVID-19 restrictions and to cease its efforts to silence those who seek to report the truth,” a spokesperson said.

The Committee to Protect Journalists, the New York-based journalist advocacy group, also called for an immediate release and that all charges be dropped, in an August statement.

Bitter Winter magazine editor-in-chief Massimo Introvigne spoke about the arrest in a previous interview, saying the regime is more afraid of the truth and free information than it is of weapons.

Countries that have announced a diplomatic boycott of the Games include the United States, Australia, the United Kingdom, Canada, Lithuania, Belgium, Denmark, and Estonia.

Luo Qiong and Chang Chun contributed to this report.