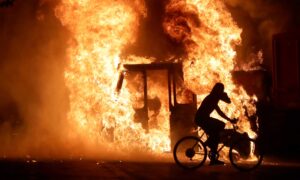 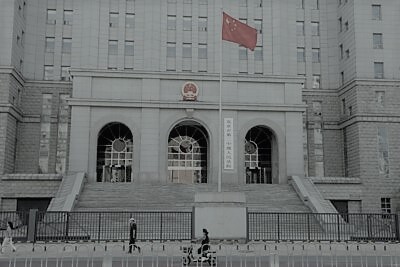 FILE PHOTO: People walk past one of the entrances of Beijing No. 2 Intermediate People's Court where Australian writer Yang Hengjun is expected to face trial on espionage charges, in Beijing, China May 27, 2021. REUTERS/Carlos Garcia Rawlins/File Photo
Chinese Regime

Weeks prior to the 100th anniversary of the Chinese Communist Party (CCP), Chinese authorities launched a string of crackdowns on Maoists, according to reports.

The regime arrested them and intimidated their families and friends to remain silent. The sweeping move has increased the tension among Maoists.

Chinese Maoists are usually primarily Chinese nationalists. They prefer planned economy to market economy, which they deem as the root cause of present-day China’s social problems. When it comes to foreign policies, they assert China should take a tough line with Western democracies.

The police of Jijing city in northern China’s Shandong province conducted a series of arrests of Maoists in different provinces on undisclosed criminal charges since May 12, according to RedChinaCn.net, a China-based website that promotes communism and is opposed to China’s economic reform over the past 30 years.

The Epoch Times has noted many unusual spelling mistakes in the RedChina article, which seemed to be intentionally used to avoid the CCP’s censorship on sensitive keywords.

The news hadn’t broken out until recently. The operation was so confidential that only days later did their families and friends learn of their disappearances.

The first and also the leading detainee was Ma Houzhi, 77, male, a retiree and a former professor at Qufu Normal University of Shandong province. Afterward, fellow Maoists were taken away by police, including Liu Qingfeng, Fu Mingxiang, Hu Jiahong, Nie Jubao, and Wu Ronghua.

Beijing’s move drew calls for the release of the Maoists. Angry supporters questioned local police via phone about their arrests.

However, police officers refused to disclose specific accusations in the name of case secrets. The police threatened to punish anyone who defied them.

“They’ve certainly been involved in gang crime,” police explained. “But that has nothing to do with promoting Chairman Mao.”

Another police officer claimed that they had no obligation to inform them of the real charges, given the confidentiality of the case.

This is not the first time that Maoists have been purged by the CCP regime.

In 2009, Ma and his followers gathered in the municipality of Chongqing, which is directly under the control of the central government, and declared that they had created the Maoist Communist Party of China, an underground organization intent on restoring late Chinese leader Mao’s policies. They rejected China’s 30-year reform and opening up as a “capitalistic restoration.”

At that time, Chongqing was the stronghold of Bo Xilai, a then-powerful political figure who stirred up Maoist-style rallies and social policies as party chief of the megacity, drawing attention at home and abroad.

Ironically, it was in Chongqing that the meetup of Ma and his followers were raided by Chongqing police. All attendees were detained; and later, the leaders were sentenced to jail, including Ma himself, who was given the heaviest punishment—10 years in prison—on a charge of inciting subversion of state power.

California-based China expert, Wu Jianmin, said in an interview with The Epoch Times on June 10 that it is no surprise that Chinese leader Xi Jinping cracked down on domestic Maoists.

In his opinion, Maoists resisted the current wide gap between the rich and the poor in China. Accordingly, they aimed at equalization or redistribution of social wealth or resources among citizens. In other words, Wu argues, they are set against the Xi-led second-generation red aristocrats who possess large fortunes.

He noted the ruling CCP regime will never pursue so-called “common prosperity.” On the contrary, China’s red aristocrats are cheating Chinese people and grabbing personal gains on the pretext of communism.

Xi will strike down any forces attempting to challenge his authority, no matter whether they choose to form a political party or not, the expert said.