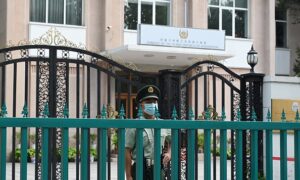 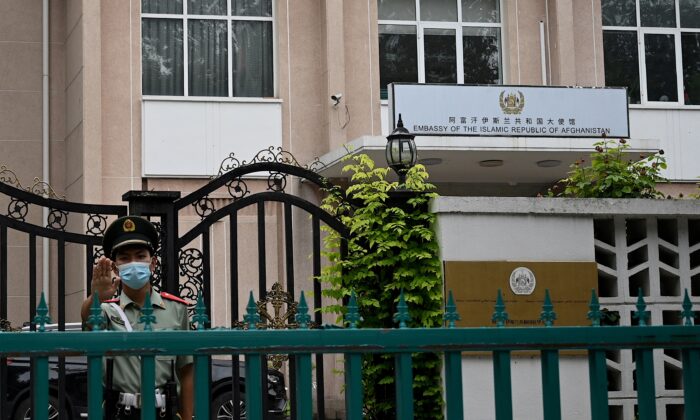 The Chinese regime says the United States can’t simply walk away from the Afghanistan chaos, in its latest salvo directed at Washington amid an aggressive propaganda campaign leveraging the crisis.

Chinese foreign ministry spokesperson Wang Wenbin on Aug. 23 cast the United States as the “chief root cause and biggest factor” for the unfolding instability in Afghanistan, saying that the United States “should not simply take to its heels” but should instead provide reconstruction and humanitarian aid.

After the Taliban’s rapid takeover of the country, Beijing has been quick to capitalize on the crisis to tarnish U.S. leadership on the world stage.

The Chinese regime also sees an opportunity to fill the void left by the United States in an area that Beijing considers its own backyard—Afghanistan shares a 47-mile border with China’s Xinjiang. But the regime is also wary that instability in the country could spill over to neighboring Pakistan and Central Asia and potentially make its way to the Chinese border.

Since Afghanistan’s fall to the Taliban, the group and Beijing have both expressed a desire to stay on friendly terms. The Chinese regime, falling short of recognizing the group as the new ruler, has previously described the Taliban takeover as “the will and choice of the Afghan people.” Wang, in the Aug. 23 press briefing, promised that Beijing would “play an active role in promoting peace” in Afghanistan and helping the nation to “achieve self-development.”

The Taliban last week expressed hopes that Beijing could contribute to the country’s rebuilding efforts, with a spokesperson telling Chinese state media that the group had been in touch with a Chinese delegate Beijing recently appointed to liaise with the new regime.

But China–Taliban relations will be more pragmatic in nature than the warm friendship portrayed by Chinese state media, analysts say.

Frank Lehberger, sinologist and a senior research fellow with India-based Usanas Foundation, said the Taliban will only exert efforts to accommodate the wishes of the Chinese Communist Party (CCP) when the group’s own demands are appeased; right now, the Taliban’s main concern is cash flow.

“As long as the CCP leadership quickly pays the amounts of foreign currencies or provides all the infrastructure investments that the Afghanistan Taliban want … then the Taliban will be ‘nice’ to China,” he told The Epoch Times.

“But if the CCP is unwilling or unable to provide the expected finances in time, or if China does anything that does not please the Taliban, then the Taliban will very fast bite the Chinese hands that feed them.”

Money is also a pressing challenge that the Taliban faces in cementing its control. The United States has blocked the Taliban’s access to billions of dollars in Afghan federal reserves that are held in U.S. bank accounts, and the International Monetary Fund has withheld $460 million in aid. This financial pressure leaves the United States with a potential leverage point as tensions continue to surge.

Adding to the complexity, the Chinese regime has long-held fears that the country could harbor Uyghur militants who may launch attacks into China’s far west Xinjiang region, home to Uyghur Muslims that the regime has repressed in an expansive campaign purportedly to eliminate terrorism.

The Taliban last month assured Beijing that it would “never allow any force to use the Afghan territory to engage in acts detrimental to China,” but it remains unclear how much control the group can exercise over the country to follow through with this pledge.