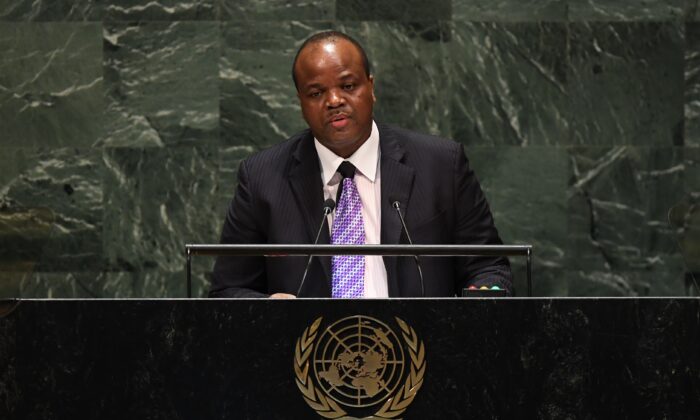 King Mswati III of Eswatini speaks during the 74th Session of the General Assembly at the United Nations headquarters in New York on Sept. 25, 2019. (Timothy A. Clary/AFP via Getty Images)
Thinking About China

Beijing Revives Its Coup Against the King of Eswatini

The Chinese Communist Party (CCP) has used the Russia-Ukraine war as a cover to undertake new initiatives in the Indo-Pacific. Still, it has also used the distraction to revive its plan to overthrow the government of Eswatini in Southern Africa.

The elements began coming together again in late April 2022.

Beijing is once again in a position to move against the king of Eswatini (formerly Swaziland) now that Eswatini’s army was effectively neutralized on April 22 and King Mswati III’s major defenders removed from positions of power. A successful coup that removes Taiwan’s most important alliance in Africa would help revive the CCP on the continent.

The CCP’s failure to force all remaining states that still recognized Taiwan to shift recognition to China by the end of 2019 was taken by CCP General-Secretary Xi Jinping as a significant insult.

The CCP’s intelligence arms, spearheaded by the Ministry of State Security (Guoanbu), working primarily through the Chinese Embassy in Pretoria, South Africa, have gradually penetrated the Eswatini Parliament as well as members of the royal family, exploiting their long-term dissatisfaction with the way King Mswati III has reigned. A number of these officials have been identified but have not been prosecuted because of their links to the Crown, although some were retired.

More officials have yet to be identified in the pro-Beijing coup group, which is supported by key elements of neighboring South Africa’s governing African National Congress (ANC) party, particularly the Youth Wing. Not insignificantly, the anti-monarchy factions in Eswatini have at various stages been known to, and encouraged by, the U.S. Embassy and the United Kingdom’s High Commission.

The CCP was thwarted in its attempt in late 2019 to overthrow the monarchy—in fact, specifically to assassinate King Mswati—and create a republic that would renounce Eswatini’s diplomatic relations with Taiwan (the Republic of China: ROC) in favor of China. However, Beijing subsequently was able to engineer the resignation of the key official who thwarted the coup attempt, the then-commander of the Umbutfo Eswatini Defense Force (UEDF), Gen. Jeffrey Tshabalala, and have him replaced by an inexperienced political appointee.

That coup attempt in late 2019 and early 2020 had reached the stage where armed, mostly Lebanese and Israeli mercenaries hired by the CCP had already entered Eswatini while the king was in his annual seclusion. A running operation, spearheaded by the UEDF commanding officer, Gen. Tshabalala, thwarted the operation.

At that point, Eswatini was the only nation-state in Africa that still recognized the ROC. Xi had determined that, by 2019’s close, all states recognizing Taiwan around the world would have switched their allegiance to Beijing. Tshabalala’s actions thwarted that.

By 2019’s end, in fact, there were still several states around the world that recognized Taiwan. And in 2021, another African state, the Republic of Somaliland (albeit not formally recognized by the international community but strategically placed in the Horn of Africa) had opened diplomatic recognition of the ROC.

Swaziland News (published, in fact, by opposition elements in South Africa) in early October 2020 published a report that Mashikilisane Fakudze had allegedly held a secret meeting with Prince Lindani at Nkoyoyo where a plot to oust Army Commander Tshabalala was discussed at length.

Queen Mother Ntombi Tfwala stretched her traditional powers when she forcefully appointed Fakudze as acting commander of the EUDF. The queen mother is legally the co-regent of Eswatini with her son, the king, and is known as the Indlovukazi (a title roughly corresponding to queen mother, literally translated as Great She-Elephant).

The king, however, has traditionally been the key executive authority, so it was significant that Chinese and South African interests combined their efforts with anti-Mswati elements in Mbabane, the Eswatini capital, to bypass the king in removing Tshabalala. They also worked together to create a scandal to publicly embarrass Tshabalala, causing him to resign to avoid being a political liability to the king.

Lt.-Gen. Fakudze was, in August 2021, then named acting commander of the UEDF after the resignation of Tshabalala. The transition, authorized by King Mswati, was announced by Prince Hlangusempi, the national chief defense officer. It followed significant internal dissent from the group close to the former UEDF commander.

Fakudze, who had no military experience or education (other than as a military lawyer), immediately began moving personnel to break up the efficient apparatus built up by Tshabalala.

It took eight months, but King Mswati, on April 22, was forced to confirm Fakudze as EUDF commander. Fakudze had acted, upon taking acting command, in ways that were criticized by other senior army officers. But for Beijing, Fakudze was perfect, significantly weakening the UEDF and, more importantly, ensuring that Tshabalala was sidelined.

CCP intelligence and political officials, often working through the ANC, have constantly attempted to covertly recruit Eswatini officials and diplomats. At least one senior Swati diplomat, who later was promoted to the key position of secretary of the foreign ministry, was recruited by China’s Guoanbu, apparently in Singapore. He only recently retired from the foreign ministry and has not been prosecuted.

An online report in November 2021 said “that the chief [Prince Magudvulela] has been given millions of Emalangeni [Swati currency] that are coming from Mainland China to use as bait to the chiefs for them to turn against the king.”

The prince denied that he had attempted to stir other chiefs into opposition to the Crown, and there was no subsequent evidence that any chiefs of the Swati had agreed to oppose the king.

“The [online] article mentioned that Khumalo and Magongo were openly supporting the revolt while Malambe and Mthethwa have suffered a change of heart and were keeping a distance from the activities related to the undermining of the country’s authorities. It was also mentioned that Prince Magudvulela had been chosen to try and influence the chiefs because he was also a chief, responsible for the Ludzibini Chiefdom in Northern Hhohho Region.