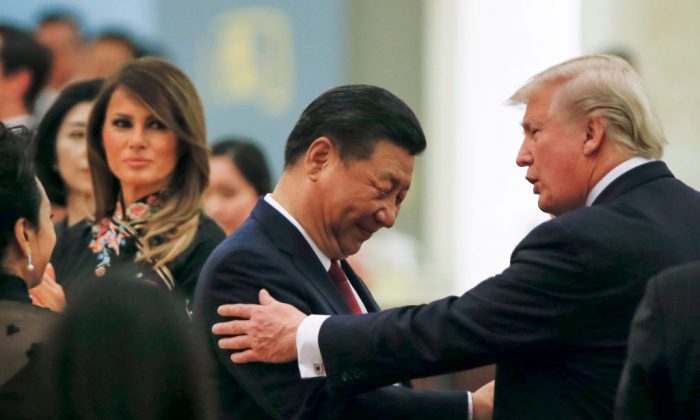 President Donald Trump (R) talks to China's leader Xi Jinping during a state dinner at the Great Hall of the People in Beijing on Nov. 9, 2017. (THOMAS PETER/AFP/Getty Images)
China-US News

WASHINGTON—Chinese officials said they found “massive evidence” of antitrust violations by America’s largest memory-chip maker, Micron Technology, in an investigation that is expected to result in the Chinese regime slapping Micron with substantial fines.

The tit-for-tat move, which may escalate the U.S.-China trade dispute, followed the recent U.S. crackdown on a Chinese state-owned company for stealing American trade secrets.

“The anti-monopoly investigation into these three companies has made important progress … [It] has yielded massive evidence,” said Wu Zhenguo, head of China’s anti-monopoly bureau under the State Administration for Market Regulation, according to the Financial Times.

Officials in Beijing didn’t offer specific details about the wrongdoing.

The price-fixing investigation started May 31 after sharp increases in DRAM prices. In the first such probe by Chinese authorities, officials were reported to visit Samsung, SK Hynix, and Micron’s offices in May without prior notice.

According to experts, these probes were initiated because of pressure from Chinese electronics manufacturers, mainly smartphone makers who suffer from the high cost of chips.

The price-per-bit of DRAM chips has continued to rise this year, following a nearly 50 percent jump in 2017. According to a Citi report, high DRAM prices reflect technology difficulties and an unexpected rise in demand.

“Considering that the memory players have been avoiding interactions among themselves given their history of collusion, it would be difficult to prove the Chinese government’s allegations,” Citi analyst Peter Lee said in a report on June 3.

The most recent announcement by the Chinese investigators, however, looks like a continuation of the trade dispute between Washington and Beijing, Lee said in another report.

“We believe the Chinese government’s actions are related to current US-China trade friction,” he wrote on Nov. 18.

According to the Financial Times report, China could impose fines as high as $2.5 billion on each of the three chipmakers.

“This would create additional pressure to cut DRAM prices and build more wafer factories as joint ventures with local Chinese companies to spur the transfer of technology to China,” Kim Young-woo, an analyst at SK Securities told the newspaper.

US Actions to Defend Micron

The move by Chinese authorities came at a time when the U.S. government took unprecedented actions to defend Micron Technology.

The Commerce and Justice departments recently cracked down on a Chinese state-owned company for stealing Micron’s trade secrets.

On Nov. 1, the Justice Department issued indictments against China’s Fujian Jinhua Integrated Circuit, its business partner Taiwan’s United Microelectronics Corp., and employees for conspiracy to commit trade secret theft, economic espionage, and related crimes. The companies were alleged to have stolen Micron’s trade secrets related to the production of DRAM.

The Chinese regime has set the development of DRAM and other microelectronics technologies as a national economic priority.

The Justice Department also filed a civil lawsuit to block Jinhua and its partner from exporting to the United States any products made by using the trade secrets at issue.

In addition, the Commerce Department announced in October that Jinhua posed a national security threat, and added the company to its “entity list” to restrict exports to Jinhua.

According to experts, this action by the Trump administration is an unprecedented effort to use a legal tool widely known for penalizing foreign companies that support terrorism, send goods to sanctioned countries like Iran or North Korea, or violate export-control rules.

U.S. officials are now searching for additional cases where U.S. businesses have been harmed by Chinese IP theft.

A study found that the annual cost of IP theft to the U.S. economy could be as high as $600 billion.

During the bilateral trade negotiations this year, the Trump administration presented Chinese officials with a long list of demands, including ending IP theft.

The last round of talks ended in August as Chinese officials gave no indication that they were ready to meet Washington’s demands.

President Donald Trump is set to meet Chinese leader Xi Jinping at the G-20 summit in Buenos Aires. Both sides are considering a formal, bilateral meeting at the summit that may include discussions on trade as well.

Beijing may use its Micron probe as a bargaining chip for its trade talks with Trump, according to analysts.