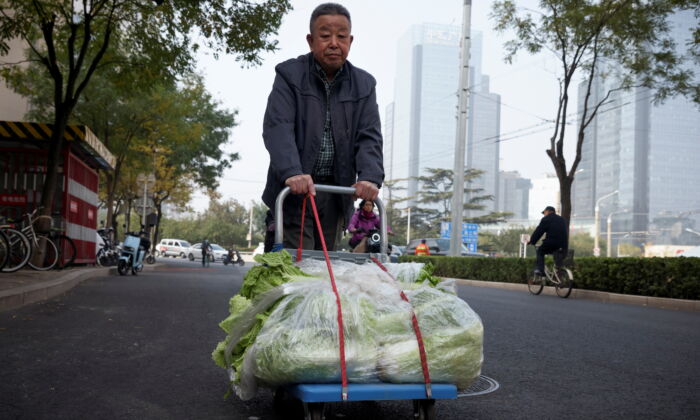 A man transports cabbage on a cart after buying it at a street stall in Beijing, China, on November 4, 2021. (REUTERS/Thomas Peter)
Social Issues

Beijing Residents Stock Up on Cabbages in Uncertain Times

Beijing residents are stocking up on cabbage after authorities issued a notice telling people to keep daily necessities in stock in case of emergencies.

Supermarkets have capped sales at three cabbages per person, but even then, shoppers arriving after 9 a.m. local time left empty-handed.

“Every year at this time the [cabbage] sales volume is high. But after the report came out, everyone rushed to buy even more,” said Jia Jinzhi, a grower who sells cabbage at Beijing’s Xinfadi wholesale market.

The panic buying followed a notice from the commerce ministry on Nov. 1 encouraging people to stock up on daily necessities in case of emergencies. The lack of explanation about the directive triggered long queues outside supermarkets in downtown Beijing in the early mornings last week. On China’s social media, some users even linked the advice with a potential war with Taiwan.

State-run Economic Daily responded to concerns in a later report, saying the notice was meant to make sure people are prepared for a potential lockdown due to the recent COVID-19 outbreak. But it didn’t stop shoppers from stocking up on cabbage.

Customers at a local supermarket said they were paying about three times what they paid last year, or 1 yuan ($0.16) per half kilo.

But if they didn’t buy now, prices would double further into winter, said another shopper surnamed Sun.

“You can keep it for two or three months. You put it outside, find a cotton blanket to cover it,” he said.

As the vegetable could be kept fresh for months in freezing temperatures, people living in northern China are used to buying up to dozens of green cabbages to eat during the winter.

Chinese families have started increasing their stockpiling of staples, including cabbages, after a recent surge in the price of vegetables and seasoning.

A resident in Beijing Tongzhou told The Epoch Times the price of cabbages, spinach, cucumbers, and radish had more than doubled in the first week of November.

Tang Ke, an official at the Ministry of Agriculture and Rural Affairs, said at a press conference on Nov. 4 that the reasons for the price rise include poor weather reducing production, and regional lockdowns putting strains on deliveries.

Meanwhile, the recent nationwide cold snap has caused traffic disruptions, adding more pressure on food supplies. Beijing and other northeastern regions in China experienced snow on Nov. 7, almost a month earlier than usual, leading to the closure of roads and cancellations of flights and trains.

State-backed media The Paper reported on Nov. 7 that snow piled up in residential compounds under lockdown cannot be cleared away.

Many Beijing residents have been sealed in their homes as the authorities have further tightened restrictions against growing COVID-19 outbreaks now spread to over half of the country’s provinces.

Officials are also on high alert as Beijing is currently holding a major closed-down summit of the top members of the Chinese Communist Party.