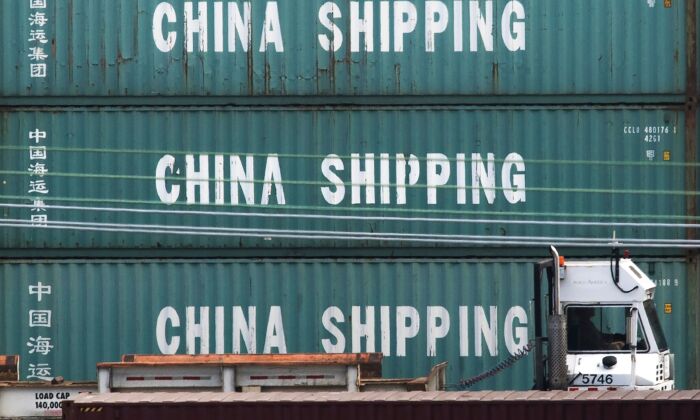 A truck passes by China Shipping containers at the Port of Los Angeles, in Long Beach, Calif. on Sept. 1, 2019. (Mark Ralston/AFP via Getty Images)
China

The Australian government has refused to respond to Beijing’s “repeated” requests to begin negotiations to join one of the world’s most extensive free-trade agreements.

This is despite suggestions from Beijing that the current frosty relations between the two countries would improve if Australia backed its admission to the bloc.

China’s ambassador to Australia, Xiao Qian said Beijing was urgently seeking to hold talks with the federal government on its application to join the Comprehensive and Progressive Agree­ment for Trans-­Pacific Partnership (CPTPP).

“We’ve been asking for an early start, but there’s no clear confirmative response from the Australian government yet,” he told The Australian on Wednesday.

The ambassador also signalled that the end of the year would be too late, The Australian reported.

China will not be able to gain access to the bloc unless it gets approval from every bloc member to join.

Currently, there are 11 members of the free trade agreement, including Australia, Brunei Darussalam, Canada, Chile, Japan, Malaysia, Mexico, Peru, New Zealand, Singapore, and Vietnam. However, the United Kingdom (UK) formally requested to be included in the CPTPP in 2021, and the CPTPP Commission confirmed it would formally begin accession negotiations with the UK in June 2021.

The request from China comes after Beijing initiated a two and half year campaign of economic coercion, which swept up eight major Australian exports—beef, seafood, wine, honey, lamb, wheat, coal, and timber—after previous Foreign Minister Marise Payne called for an inquiry into the origins of the COVID-19 pandemic in April 2020.

They included a demand for the government to stop the press reporting negatively on China; stop building alliances with Indo-Pacific partners; rescind the ban on Huawei from Australia’s 5G network, and remove foreign interference laws.

New Australian Prime Minister Anthony Albanese has called on Beijing to drop its coercive trade restrictions before the federal government considers a reset of bilateral ties.

“It is China that has imposed sanctions on Australia,” Albanese told reporters on June 13. “They need to remove those sanctions in order to improve relations between Australia and China.”

“China needs to remove the sanctions that they have put in place. There’s no reason for them to be there. We are a trading nation. We’ve fulfilled all of our obligations as part of the contracts and arrangements that have been put in place. And we produce good products as well. And those sanctions hurt Australia. But they also hurt China.”

Asia Society Australia’s executive director for policy, Richard Maude, has said that he believes Australia is on firm ground in choosing to ignore China’s request to join the trade pact.

“I would think it would be untenable for an Australian government to seriously consider Chinese accession to the CPTPP while China continues to take ­arbitrary trade action against Australia,” he said.