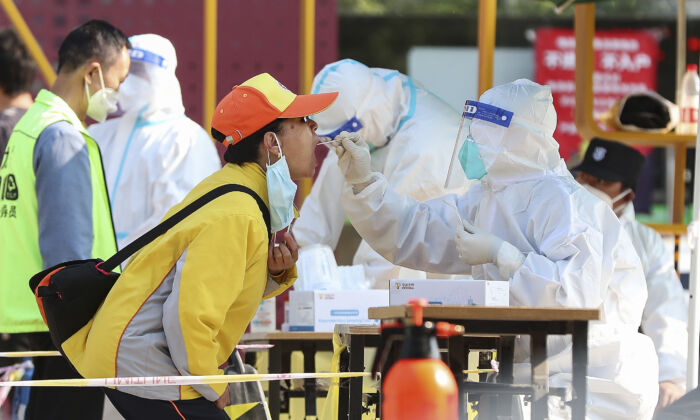 After gradually tightening COVID-19 curbs over the past few weeks, Beijing officials on May 12 said they “recommend” that residents stay at home while new mass testing is underway.

Panic buying gripped the capital amid rising concern of a citywide lockdown, though authorities have dismissed lockdown speculation as “rumors.”

Xu Hejian, a spokesperson for city officials, said at a briefing that Beijing will conduct three rounds of testing in 11 of the city’s 16 districts and an economic zone for three days, beginning May 13. He urged people to reduce their movements during the period.

With gradually escalating restrictions in China’s capital—most recently the suspension of taxi services in some virus-hit districts—many are nervous that the city is heading toward a Shanghai-style lockdown. The ongoing lockdown in the financial hub started in late March when officials asked its 25 million residents to stay at home so that health workers could complete two rounds of mass screening.

Before announcing the snap lockdown on March 28, Shanghai officials also had rejected lockdown speculation as “rumors.”

“The so-called lockdown and ‘silent period’ are all rumors,” said Xu, referring to a new term used by officials announcing a lockdown.

“It is unnecessary to hoard food,” Xu said at the press conference. “Residents don’t need to worry, the city’s operations won’t be affected.”

Nevertheless, long lines reappeared outside supermarkets and shops late on May 12. Residents scrambled to stockpile food and other daily necessities, while anxiously listening to Beijing’s daily COVID-19 news conference on their phones.

“This is quite unhealthy because people are in a very nervous mood,” said Grace Zhao, who stood in a 160-foot line outside one supermarket in Chaoyang, Beijing’s most populous district and the epicenter of its current outbreak.

The order comes after Beijing recorded 36 new cases in the previous 24 hours, pushing total infections to nearly 1,000 since April 22. But the official count has increasingly come into question by residents and experts, given the Chinese regime’s history of downplaying and covering up information about outbreaks across the country.

Officials on May 12 placed more residential buildings under lockdown, where new infections were recorded. Beijing has already closed schools, some shopping malls, entertainment, and tourist venues, banned dine-in services at restaurants, and suspended sections of its bus and subway systems since the capital city kicked off mass testing on April 25.

The new order means nearly all of the city’s 22 million residents will take three PCR tests. Residents in the 10 main districts are recommended to work remotely on May 13 and stay home over the weekend. The other five districts in suburban areas will see hotels and scenic spots closed.

The Chinese regime holds tight to its “zero-COVID” policy, aimed at eliminating every infection among communities by restricting movement and placing anyone at risk into mandatory quarantine.

The heavy-handed curbs, which have confined millions in Shanghai to their homes for more than six weeks, is wreaking havoc on the country’s economy and global supply chains. With factory workers and consumers stuck at home and many businesses forced to suspend operations, China’s export growth is at a two-year low and unemployment is at near two-year highs.

On May 12, the yuan hit a new 19-month low, having tumbled almost 6 percent in less than a month.

Criticism of Beijing’s strategy has also grown among residents and experts. The head of the World Health Organization, who had repeatedly praised the regime’s outbreak response earlier in the pandemic, expressed rare concerns about the zero-COVID policy on May 10; his remarks were quickly taken down from China’s tightly controlled internet. The regime has doubled down on censorship as more residents take to social media to share their struggles and report conditions experienced during lockdown or in forced quarantine.

Beijing officials said the results of the mass screening will determine their next move.

Beijing, the country’s political center, has never gone through a full-scale citywide lockdown since the regime launched its zero-COVID playbook at the onset of the pandemic in early 2020.