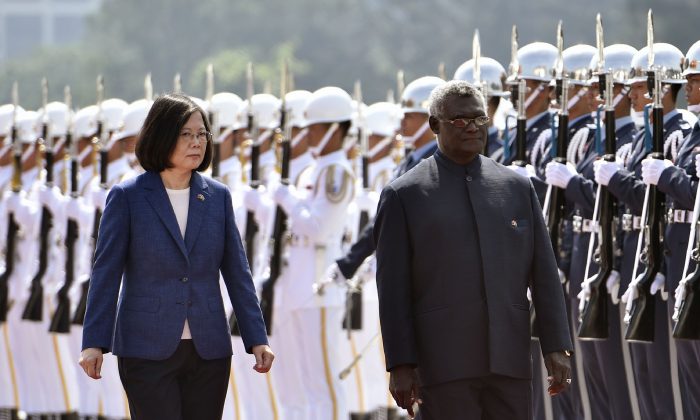 Beijing Pushing Taiwan and US Allies out of the Pacific Islands, Says Congressional Report

The Pacific Islands—a region in the vast Pacific Ocean that contains 14 countries, 7.7 million square miles of space, and the U.S. territories of Samoa, the Northern Mariana Islands, and Guam—tend to receive less attention among observers of the Asia-Pacific.

The People’s Republic of China, however, is rapidly moving to establish a political, economic, and military presence across the region, particularly through its Belt and Road Initiative, a massive diplomatic and economic development policy designed to assert Beijing’s strategic interests across the world.

Six of the 14 countries—Kiribati, the Marshall Islands, Nauru, Palau, the Solomon Islands, and Tuvalu—have formal diplomatic relations with Taiwan. They are some of Taipei’s few remaining diplomatic allies in the international arena who could formally speak on the island nation’s behalf and support its participation in major international organizations.

Beijing is now using economic incentives as a tool to entice or coerce these countries to abandon Taiwan, the USCC report said. Palau, for example, has seen its important tourism industry hit hard after Beijing banned Chinese tour groups from visiting the country, following its hosting of Taiwanese President Tsai Ing-wen in November 2017.

Taiwan is not the only one under threat. Australia and New Zealand, two other key U.S. partners in the Pacific that have extensive historical and current ties with the Pacific Islands, also see their presence there under threat as Beijing aggressively asserts its influence across the region.

“As Beijing increases its comprehensive engagement in the region, the United States and its allies and partners involved in the region—notably Australia, New Zealand, and Taiwan—face increasing challenges in ensuring a free and open environment and preserving their interests,” the report says.

The USCC cited an April 2018 report by the Sydney Morning Herald that alleges that a Chinese state-owned enterprise has approached the Pacific Islands nation of Vanuatu about building a Chinese military base there. The rumor was vehemently denied by both the Beijing and Vanuatu governments, but observers say the allegation is consistent with Beijing’s ambition to extend the overseas force projection of its People’s Liberation Army (PLA) onto the Pacific Islands region.

“Although the size or scope of a potential base in the Pacific Islands is unclear, it would serve several of China’s security interests,” the USCC report says. “It would provide the PLA with a strategic outpost beyond the Second Island Chain, expanding its force projection capabilities in the Western Pacific.”