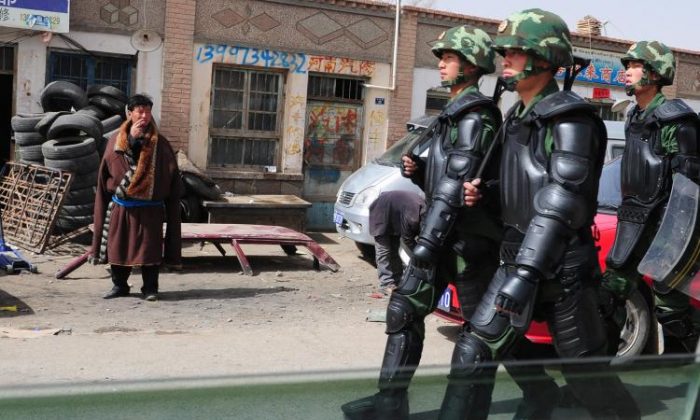 Chinese language signs are visible in this photo of a Tibetan man (L) in traditional clothing, watching as Chinese paramilitary troops in riot gear march along the streets of Guomaying, on the Tibetan plateau. Chinese policy appears aimed at replacing ethnic languages with Mandarin. (Frederic J. Brown/AFP/Getty Images)
China

Last week eight Tibetans were detained in the latest effort in Beijing’s battle against ethnic and local languages.

The Tibetans were linked to a grassroots effort to preserve their language and cultural identity, said Radio Free Asia. The practice of teaching the local language is considered illegal by authorities in both Tibet and Uhygur regions, where the Chinese regime seeks to eliminate ethnic languages, replacing them with Mandarin, China’s official language.

The Tibetans were detained in Karma township, where a popular Tibetan religious figure, Khenpo Kartse, was detained nearly a month ago, accused of carrying out anti-state activities including teaching the Tibetan language, sources told RFA.

In Tibet, the Chinese regime represses Tibetan culture by making the language redundant throughout society, says the Central Tibetan Administration. Pointing to the education system, which is controlled entirely by the Chinese Communist Party, the Administration argues that the system is entirely set up to suit the needs of Chinese immigrants rather than the Tibetan students.

In Xinjiang, similar language repression is enforced on the Uyghur population.

“Compounded by the near elimination of the Uyghur language in the education system and restrictions on cultural practices, the Uyghurs face losing their ethnic distinctiveness,” Rebiya Kadeer, president of the exile World Uyghur Congress, told a 2012 U.S. congressional hearing in Washington.

Television and radio hosts were instructed to speak proper Mandarin and not to imitate dialects, the article said.

Fully a third of the Chinese population, or 400 million people, can’t speak Mandarin, Ministry of Education representative Xu Mei told state media Xinhua in a September 2013 article. Xu went on to say that the ministry would focus on promoting the use of Mandarin in the remote countryside and areas inhabited by ethnic minorities in the coming year.