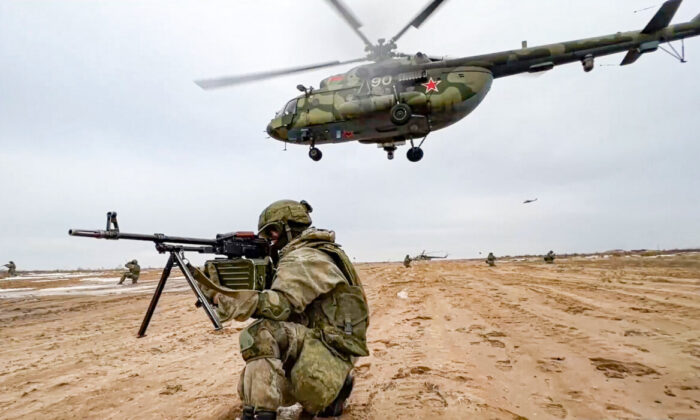 The U.S. Department of Defense’s recent summary of the Russia-Ukraine war shows that the United States knows the situation well and has been sharing intelligence with Ukraine. Meanwhile, the Chinese Communist Party (CCP) continues to praise the Russian military as powerful and well-armed. Experts say that the Russian army so far has lost both psychologically and practically on the battlefield, and the CCP has humiliated itself with its propaganda.

The U.S. Department of Defense issued a press release on March 8 summarizing the Russia-Ukraine war in stages.

A senior U.S. defense official said at a briefing on the same day that almost all Russian troops gathered on the Ukrainian border are now inside Ukraine and the invading Russian army continues to face rock-like resistance from Ukraine.

The official stated that in general, the Russian army’s operation to seize the Ukrainian capital Kyiv has stalled. “Near Kyiv, we still observe that the Russians are not close to the city center,” he said. “The nearest place they can find is the airport.”

The Russian army is trying to attack Kyiv from the east. “We estimate they are about 60 kilometers from the city,” the official said, “so they are still farther away than the main force pushing north.”

In southern Ukraine, Mariupol is isolated but still fighting. An official said that Russian forces were seeking to attack the port city of Odesa. Since Russia has 11 amphibious landing ships in the region, an amphibious attack is likely.

The official also said that the Russians were plagued by problems such as low morale, logistical support, and that the Russian military operations seem to be behind the timetable they had set.

U.S. military aid is reaching the Ukrainian forces. He said the United States provided $1 billion worth of security assistance to Ukraine last year. He said that the $350 million lethal aid approved more than a week ago has been delivered, almost in full, at an unbelievably fast rate.

US Controls the War and Shares Intelligence with Ukraine

It appears that the United States is well aware of the war situation in Ukraine, and has been sharing battlefield intelligence with Ukraine.

A senior Biden administration official said that in early March, the White House revised existing guidelines for the Pentagon and U.S. intelligence agencies to send intelligence data to the Ukrainian government to clear any bureaucratic hurdles in the information-sharing process.

Long before the Beijing Winter Olympics, the United States released accurate intelligence on the deployment of Russian forces and predicted that Putin could order an invasion of Ukraine at any time.

Russia claimed in February that its troops were withdrawing after conducting exercises in the southern and western military districts close to Ukraine. But instead of withdrawing, senior U.S. government officials say that Russia  increased its presence on the Ukrainian border

Su Ziyun, director of military strategy and industry of the Institute for National Defense and Security Research of Taiwan, said in a recent interview with The Epoch Times that the United States is very careful to assist Ukraine, including providing defensive weapons and sharing intelligence.

“The images we are talking about are not physical photographs,” Su said, “but it is important for the Ukrainian garrison to have a comprehensive understanding of the actions and deployment of the Russian army, which breaks the ‘fog of war’ [Carl von Clausewitz] and allows Ukraine to see clearly.”

He expressed that specifically, the United States may have provided Ukraine with some electronic communications equipment that could interfere with Russian military communications. “We have seen Motorola’s civilian wireless communication [equipment]. It should be said that it is very sophisticated, and we have seen it in the Ukrainian army.”

“Then there may be battlefield reconnaissance aircraft,” he said. This type of reconnaissance aircraft can perform tomographic scans of the battlefield, and the radar on the aircraft can make relatively complete radar images of ground targets, which the United States will then provide to Ukraine. Under these circumstances, Ukraine could effectively prevent the advance of the Russian army.

The CCP Touts the Russian Army and Exposes Their Weaknesses

The CCP has been touting the combat effectiveness of the Russian military. On February 25, the day after Russia invaded Ukraine, CCTV, the mouthpiece of the Chinese Communist Party, published an article titled “From Yesterday to Today, Five Tactics Used by the Russian Army.”

According to the article, Chinese military experts claim that the Russian military accumulated a lot of practical combat experience through the Syrian war in recent years, while continuously modernizing their equipment, which has a great advantage in both “quality” and “quantity.” In contrast, the Ukrainian army lacks soldiers and experience in large-scale operations, has outdated equipment, insufficient materials, and has little chance of winning in conventional warfare.

The article stated that the Russian military uses Iskander-M tactical ballistic missiles, Iskander-K cruise missiles, Kh-101 air-launched cruise missiles, and Kh-31P air-launched anti-radiation missiles, saying these missiles have been the “backbone equipment” of the Russian military in recent years. “The accuracy control at hundreds of kilometers away is within 20 meters, especially the “Iskander” series of missiles, in which the accuracy is within 5 meters” and can “carry out precision strikes on small targets and flat targets.”

The article also claims that experts believe “the Russian army will carry out large-scale electromagnetic suppression when the war begins, which will make it more difficult for the Ukrainian army to respond quickly.”

Su said that weapons and equipment are only a part of the war. “When you look at a war, you don’t just look at the equipment, but whether the unit has the ability to execute a coordinated campaign. At present, it seems that [the Russian army] does not.”

The propaganda of the Chinese Communist Party is completely wrong, he continued to say. The five tactics of the Russian military claimed by the CCP have long been a model for the militaries of various countries. As early as 1991, the United States used precision ammunition to open a path during the Gulf War. They then quickly attacked the troops into the node and then dismantled the enemy’s organized resistance. The Russian army does not seem to have accomplished such maneuvers.

He said that the Russian army may be short of precision ammunition, so it will use traditional bombs without guidance capabilities in the battle. Second, the Russian army’s rapid strike was the wrong strategy to use. At first, Russia wanted to learn from the American “Shock and Awe” tactic. The troops surrounded the city by road, then surrounded the city with munitions, and then carried out precise strikes. The purpose was to disintegrate Ukraine’s psychological defense line and make Ukraine surrender quickly. But the Russian army failed.

He believes that Russia’s invasion was ill-timed “because it is difficult for Russian mechanized troops to make combat formations, and the fields in Ukraine are muddy, making it is easy to restrict vehicles. Ergo, the Russian army must use the roads, which are more vulnerable. Because it is a marching formation, it is a single line formation, and easier to break. Putin started the war at the wrong time because he believed that a blitzkrieg could make Ukraine quickly surrender. But, Russia has failed in both the psychological battlefield and the physical battlefield.”

“The Chinese Communist Party’s habit is to speak for Russia, but its propaganda has humiliated itself.” Su Ziyun said that this war will shock the CCP because Russia borders Ukraine and so it is mainly a ground war. If Russian troops fail while walking or driving a tank to attack, it will be even more difficult for Beijing to attack Taiwan from across the sea.

CCP Army Accused of Being ‘Big but Not Strong’

Su Ziyun said that the CCP is indeed increasing its military budget and is preparing to continue to improve its equipment, but cross-sea attacks and amphibious landings are difficult military operations and can easily be blocked by Taiwan vessels at sea. Taiwan has a large number of anti-ship missiles, which play a role similar to the anti-tank missiles of the Ukrainian battlefield, and the CCP’s sea-crossing troops will also be destroyed by anti-ship missiles, which is the first difficulty. Second, the CCP lacks actual combat experience in large-scale battles, especially in naval and air warfare. His evaluation of the CCP’s military is that it is “big but not strong.”

Joyce Liang contributed to this article.