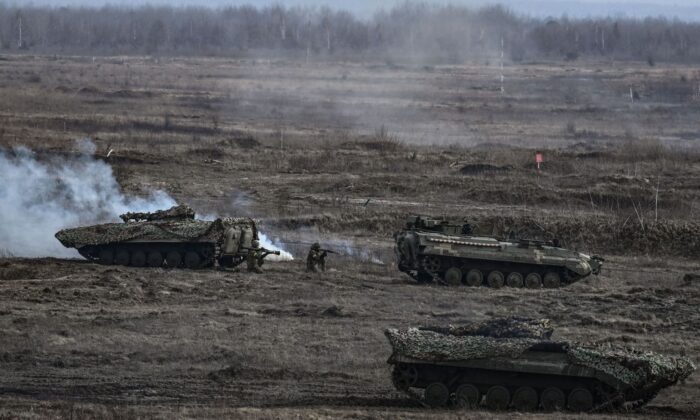 Ukrainian troops take part in a military drill outside the city of Rivne, Ukraine, on Feb. 16, 2022. (Aris Messinis/AFP via Getty Images)
Viewpoints

Beijing Positions Itself Between Moscow and Washington in Ukraine

The Chinese Communist Party (CCP) leadership has positioned itself to benefit from escalating tensions in Ukraine—regardless of what side, if any, initiates a military confrontation between Kyiv and Moscow.

Chinese State Councilor and Foreign Minister Wang Yi addressed the Munich Security Conference on Feb. 19 with calls to reject division and confrontation and instead embrace “the banner of multilateralism.”

These announcements coincide with the rapidly deteriorating geopolitical situation in Eastern Ukraine. Wang reaffirmed China’s commitment to the “sovereignty, independence and territorial integrity” of all countries. “Ukraine is no exception to the principle.”

The CCP leadership’s call for a diplomatic solution and a halt to aggression in the region should not be interpreted as a departure from a deepening Moscow-Beijing axis; rather, it is representative of the China-first, realpolitik approach to international relations that is the cornerstone of CCP foreign policy. That is the only true North Star principle that is guiding Chinese decision-making.

Many saw the Feb. 4 meeting between CCP leader Xi Jinping and Russian President Vladimir Putin as indicative of a burgeoning anti-Western entente between the two nations. This is only part of the story. While the CCP is always ready to express solidarity with any country that challenges the preeminence of the United States in the international order—especially if that challenge is a military one—Beijing is too savvy of a player to irreversibly commit itself to Putin’s Russia.

Instead, Xi has carefully curated a geopolitical position that ensures China’s economic interests are enhanced regardless of the situation’s outcome. Western sources are reporting shelling by Russian-backed separatist forces in Eastern Ukraine; Russian media contends that there has been increased Kyiv-directed shelling of the Donbas region, resulting in civilian casualties. Should Russia launch a military incursion into the region, severe economic sanctions are certain.

China will be the only country that finds itself in an advantageous position should this occur. The meeting between Xi and Putin resulted in over 16 agreements that are meant to increase economic and technological cooperation between the two countries. This includes a Chinese commitment to purchase Russian oil and gas valued at over $100 billion.

Russia’s being ostracized from the world economic community will undoubtedly make it more reliant on its relationship with China and, thus, puts it more firmly under the influence of Chinese geopolitical power. Additionally, Beijing will be in a strong position to renegotiate deals made with Moscow to secure better terms.

However, Beijing would not be unwise enough to help Russia bypass the sanctions placed on it. European countries and the United States are major economic partners for China, much more so than the current level of its economic cooperation with Moscow.

The CCP has strong bilateral relations with Ukraine as well, and will not be willing to jettison that partnership. Kyiv is a member of China’s Belt and Road Initiative (BRI, also known as “One Belt, One Road”) investment project, making it an important component of Beijing’s drive for ever-expanding international influence. Siding with Russia over Ukraine could set a bad example for other aspiring BRI countries as well (or, at least, countries that China aspires to join BRI).

China additionally wants to make sure that it is vocal in its support of Ukraine’s territorial integrity. Beijing has long been a proponent of state sovereignty and the belief that no third party or multilateral institution has a right to take direct action against the domestic policies of another country. That is part of the reason why China has never acknowledged the Russian annexation of Crimea in 2014.

Comparing Russia’s position to Eastern Ukraine and Crimea to the Chinese stance regarding Taiwan is a false parallel, however, as Beijing considers the island to be an estranged part of the country. Any action—even by force—to reunite the two is thus perceived by the CCP as not only legitimate, but inevitable.

Just like China’s commitment to Russia is contingent on international circumstances, however, its alignment with the United States and Western Europe should also not be overemphasized either. Further evidence that China is hedging its bets and not overcommitting one way or the other is that Beijing recently voiced condemnation of U.S. defense ties with Taiwan.

Russia and China both agree with the principle of state sovereignty and disapprove of multilateral incursions into countries’ domestic affairs. An example of their unity on this front was the abstention of both from voting for a no-fly zone over Libya in 2011. Another example is both Moscow and Beijing’s condemnation of the NATO airstrikes on Serbia in 1998.

Beijing’s approach to the issue of sovereignty has more to do with national interest and less to do with principle, however. The CCP walks the tightrope of condemning the U.S. disregard for Russia’s security interests, while simultaneously denouncing any use of force in Eastern Ukraine (including by Moscow) and calling for a diplomatic solution to the crisis.

Should a military confrontation ignite in Eastern Ukraine, it will be unlikely that it is irrefutably clear who initially employed force. The finger pointing over shelling and allegations of potential false flag operations already swirling around the conflict ensure that both sides will cast the blame on the other.

Regardless, Beijing has positioned itself to reap the greatest amount of economic and geopolitical benefit possible from a military confrontation—or lack thereof—in Ukraine.