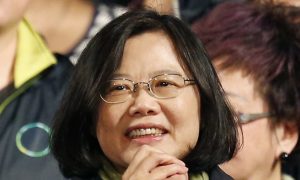 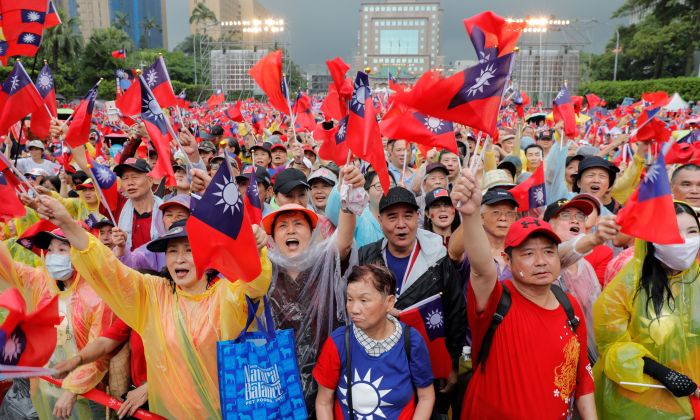 Supporters of Kaohsiung city mayor Han Kuo-yu, who has joined the race to become Taiwan’s next president in 2020, wave Taiwanese flags during a campaign event in Taipei on June 1, 2019. (Daniel Shih/AFP/Getty Images)
Chinese Regime

Beijing is engaged in a “whole-of-government” campaign to destabilize Taiwan with military force, as well as political and economic influence, a senior Pentagon official said.

While Taiwan is a self-ruled island with its own democratically-elected government, constitution, and military, China considers it a renegade province that must be united with the mainland, by force if necessary. Beijing believes any form of social chaos in Taiwan would provide it with a legitimate reason to push for its unification agenda; thus, it has intentionally sought to undermine Taiwan’s democratic system over the years.

Randall Schriver, Assistant Defense Secretary for Indo-Pacific Security Affairs, told an audience at the 2019 Asia Policy Assembly conference in Washington on June 19, that he anticipates Beijing will interfere in the island’s upcoming presidential and legislative elections in January 2020.

But compared to past attempts at election interference in Taiwan, Schriver said he believes in 2020, Beijing will likely employ more coveted means: “I think that the challenges and sophistication on the PRC [People’s Republic of China, mainland China’s official name] side [are] growing, and so what we expect this time is the use of social media, cyber intrusions, and etc.”

Schriver explained that in Taiwan’s previous presidential elections, such as in 1996 and 2000, Beijing took action to interfere.

“In 1996, it came in the form of missile exercises; In 2000 it was Zhu Rongji’s finger-wagging and threatening of the people of Taiwan.”

In 1996, China fired missiles into the Taiwan Strait to express its dissatisfaction with then-presidential hopeful Lee Teng-hui, who had vouched for the island’s formal independence. Lee won the elections despite the Beijing aggression.

Similarly, in 2000, China’s then-Premier Zhu Rongji bluntly warned the island against voting for a pro-independence leader, saying that otherwise, Taiwanese citizens would regret the choice they make. His warning came amid repeated declarations that China would resort to military action if Taiwan declared independence or “indefinitely” put off talks on unification with the mainland.

The upcoming 2020 elections mark a pivotal point in Taiwan’s politics, as domestic debates are intensifying over the island’s relationship with the mainland. Recent protests in Hong Kong against a controversial extradition bill has fueled anti-Chinese-Communist-Party sentiments in Taiwan.

The bill, which would allow any country, including mainland China, to seek extradition of criminal suspects, has drawn ire from Hongkongers who believe it is the latest sign of Beijing’s encroachment. Hong Kong was reverted from British to Chinese rule in 1997, with the Chinese regime promising that the city’s autonomy would be preserved under the “one country, two systems.” But Hongkongers complain that the opposite has happened, with Beijing increasingly extending its influence into local affairs.

Beijing has said that it would like to bring Taiwan into its fold under the same model.

A Pentagon Indo-Pacific Strategy Report released earlier this month highlighted the ways in which China continues to “develop and deploy advanced military capabilities needed for a potential military campaign” to take over Taiwan.

The regime is also increasingly employing non-military tools to tighten its grip on Taiwan, including economic pressure, such as cutting tourism to the island, and diplomatic isolation, according to Schriver.

In order to help the island fend off interference from the Chinese government as the elections approach, the United States will “make direct contributions to Taiwan’s capabilities and capacity,” Shriver promised, though he did not go into details about how exactly the U.S. government would do that.

“As we’ve outlined in our national security strategy, China seeks to shape a world order that is inimical to US interests and values,” Schriver said, noting that its threats on Taiwan “is destabilizing not just to Taiwan, but to the entire region.”

Schriver warned that If China were to succeed in its goal of reordering the “Indo-Pacific to its advantage,” the Chinese Communist Party’s authoritarian model would “become ascendant…we could see a weakening of regional and global sovereignty of countries, and leading potentially to the loss of access to global commons.”