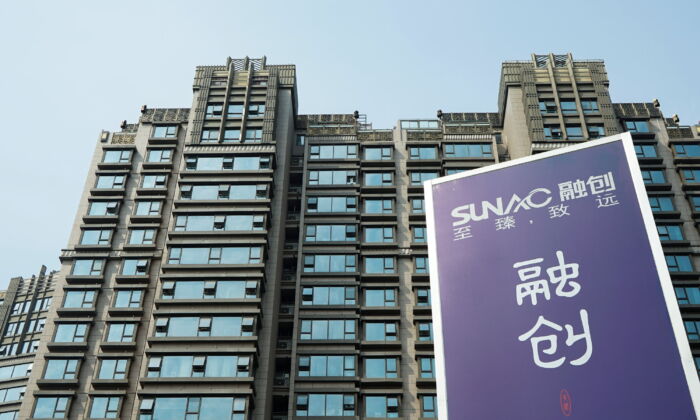 An advertisement of property developer Sunac China Holdings at a residential complex in Shanghai on March 25, 2018. (Stringer/Reuters)
Thinking About China

But these aren’t ordinary times.

Despite facing terrible economic conditions and outlook, China’s financial policymakers have only responded with relatively modest easing measures. The reason is twofold. One, regulators want to curb excess leverage in the property sector, and there’s disagreement on whether or how much to bail out the industry. And two, Beijing fears the ineffectiveness of stimulus measures, especially in areas under COVID-related lockdowns.

Headlines have moved on and Evergrande is seldom in the news, but real estate developers are still struggling, and it’s spread beyond a few names. Sunac China Holdings, the country’s No. 4 property developer by sales and which formerly had one of the stronger balance sheets in the sector, defaulted in May on a $29.5 million interest payment on its offshore dollar bonds.

Given this backdrop, more property developer defaults should be expected going forward.

The Chinese Communist Party (CCP) has apparently decided to pass another round of mini-stimulus. On May 15, Beijing announced that it would let banks cut the lower limits of interest rates for first-time homebuyers by 20 basis points.

The People’s Bank of China (PBoC) and the China Banking and Insurance Regulatory Commission, in a joint notice, said that borrowers purchasing their first homes would have the lower limit of potential mortgage rate reduced to 20 basis points (0.2 percent) below the prime rate.

It’s not nothing, but it certainly won’t move the needle for the property market. But it puts into action Chinese regime boss Xi Jinping’s words when he said a few years ago that “homes are for living in, not for speculating.” It seems policy stimulus going forward would be moderate and encourage ownership of primary homes, not investing.

Both Liu He, Xi’s top economic adviser, and Yi Gang, governor of the PBoC and a Liu ally, are against aggressive interest rate cuts.

China’s top policymakers have been trying to deleverage—or at least keep steady—the Chinese economy over the past few years, and despite the trying economic backdrop, Beijing is keen to keep the spigot shut for as long as possible.

There’s also widespread concern that China will risk currency devaluation and broad-based capital flight as the policy of the PBoC and the U.S. Federal Reserve continues to diverge. As U.S. benchmark rates rise further relative to Chinese rates, global investors will look to pull capital out of China.

For now, stimulus support from Beijing has been accompanied by warnings that authorities intend to keep debt levels in check and that they’ll look to avoid opening the floodgates.

And this is despite some truly atrocious April economic results, with retail sales falling off a cliff, exports slowing, and construction starts falling by 44 percent.

As Beijing continues to test the limits of China’s tolerance for real estate pain, global investors are wise to stay far, far away.