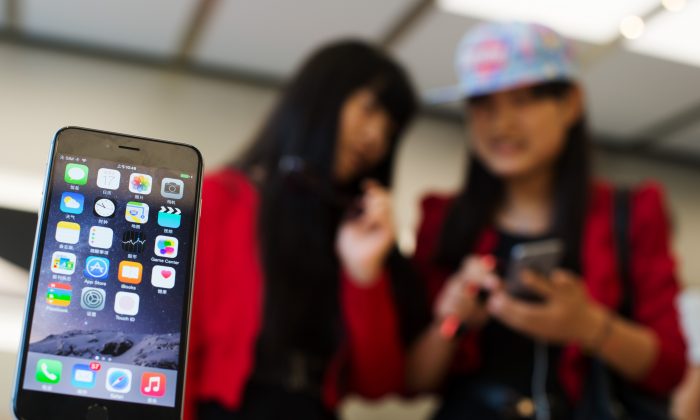 Chinese girls check out the iPhone 6 in an Apple store in Shanghai on October 17, 2014. ( Johannes Eisele/AFP/Getty Images)
China

Apple is involved in a legal dispute in China that is threatening to prevent it from selling one of its most popular products in the capital.

On May 19, the Beijing Intellectual Property Bureau ruled that Apple’s iPhone 6 and iPhone 6 Plus had a similar design to Shenzhen Baili Marketing Services’s 100C smartphone, and ordered Apple to stop selling the two phones in the city.

The order to halt sales of the iPhones has been suspended after Apple made an appeal.

“iPhone 6 and iPhone 6 Plus as well as iPhone 6s, iPhone 6S Plus and iPhone SE models are all available for sale today in China. We appealed an administrative order from a regional patent tribunal in Beijing last month and as a result the order has been stayed pending review by the Beijing IP Court,” Apple spokesperson Rachel Tulley wrote in an email to Epoch Times.

Apple shares fell about 2 percent to $95.84 at 12:19 p.m. E.T. on June 17 following reports of the Apple case in the media. In the first quarter of this year in Greater China, which includes Hong Kong and Taiwan, Apple’s sales fell 26 percent to S$12.5 billion, according to the company.

Shenzhen Baili Marketing Services, the Chinese smartphone company that holds the patent Apple is accused of infringing, barely has a web presence.

Visiting the website listed on the back of a 100C phone brings up an error message. CNBC couldn’t connect to Shenzhen Baili’s listed number, and an inquiry email bounced.

According to the Wall Street Journal, the company’s listed founder is Xu Guoxiang, a former marketing director for Chinese telecommunications equipment giant Huawei. Incidentally, Xu is also the founder of Digione, another little-known Chinese smartphone manufacturer that claimed that Apple violated a patent it held in December 2014. The nature of the relationship between Digione and Shenzhen Baili is unclear.

Shenzhen Baili’s 100C, or 100+ Android smartphone does bear a vague resemblance to the iPhone 6 or iPhone 6 Plus. But it also resembles the iPhone look-alikes by other Chinese companies, according to tech website Digital Trends.

If the Beijing intellectual property bureau rules in favor of Shenzhen Baili, it could inspire a wave of lawsuits from Apple’s Chinese competitors across the country, according to Bloomberg.

In the long run, this doesn’t bode well for the United States.

An earlier Epoch Times investigative report reveals that the Chinese regime is stealing and processing intellectual property from American companies and universities, and selling the innovations back to the U.S. at a greatly reduced price. This phenomenon costs U.S. companies trillions each year in economic value, according to industry estimates.