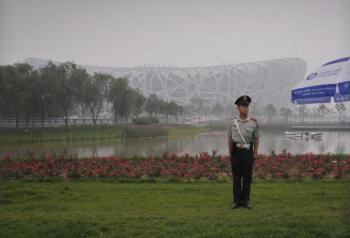 Beijing's National Stadium, the Bird's Nest, under Para-military police guard.Beijing was awarded the Olympic Games venue seven years ago. Despite the Birds Nest, no one can fly free, like a bird emerging from its nest. (Peter Parks/AFP/Getty)
Opinion

One could hardly wait to exclaim "finally!," when International Olympic Committee (IOC) vice president Thomas Bach admonishes China before the whole world. He calls for better human rights efforts four weeks prior to the beginning of the games. But one immediately wonders—why only now?

It seems that only those who are or were victims of the Communists are the only ones who can see through the regime's motives. Nowhere else are as many journalists incarcerated as in China. Press freedom? Wrong!

Temporary lifting of restrictions for the press and aid workers following the May 12, 2008 Sichuan earthquake lulled many people into believing things are changing – not so, even though chancellor Merkel and Condi Rice praise China's ruling officials—they never took a close look! The regime officials let a crucial 72-hour window pass before they permitted foreign aid to arrive. Why? What was there to hide? Atomic military secrets?

Temporary press freedom following the earthquake lasted only as long as no one asked critical questions regarding shoddy school construction. After that, imposed silence. Sophie Richardson, director for Advocacy for Asia at Human Rights Watch declared on July 7th, 2008, " Those for and those against the Olympic Games agree on one thing: less restrictions imposed on the international media and less surveillance during the games would be a huge step forward. Unfortunately, aided by the International Olympic Committees, the Chinese regime does its best to stifle such progress."

By stating that each report critical of anything happening in China, the CCP incites hatred and dislike among the population for freedom of expression. Human rights lawyer David Matas (Canada) considers it this way: "Those people who stand idly by and watch the Communists oppress the citizenry, those are the enemies of China. China means all of her citizens, and it is precisely the CCP oppressing her own countrymen." (From a June 2008 interview with NTDTV)

The Falun Gong movement is probably the saddest testament to this oppression. More and more of the followers have not merely disappeared since the beginning of this year, but have died soon as a result of torture. Not to mention they are banned from attending the games, nor are they [those who live abroad] permitted to enter the country.

According to Amnesty International, former Minister For Public Security Zhou Yongkang had publicly decreed in advance of the games, "We have to strike hard at any enemies, domestic or abroad, for instance against separatists… and heretical organizations like the Falun Gong."

One of this campaign's best-known victims of late is deceased 42-year-old musician You Zhou. He and his wife Xu Na were arrested on their way home from a musical performance. Eleven days later the authorities informed the family members to come to the Qinghe Emergency Center where they encountered the already dead You. He had been in perfect health prior to the arrest, but hospital officials refused to perform an autopsy.

No Chinese Gorbachev on the Horizon

Many people ask themselves the basic question—how did it happen Beijing was awarded the games, and how could they trust a Communist regime? Has no on learned anything from the long years of the Cold War, with all manner of diversionary tactics and Communist lies? No Chinese Gorbachev has emerged whom one might trust; someone who had once controlled the rudder and then reversed course; someone in power who now openly avows a new transparency, with all its inherent personal and political risks.

Hastily kow-towing and subservient demeanor facilitated negotiations with this Mafia-clique and gave reign to hope—hope for what? Is Chinese freedom available as a hidden commodity, to be found under the store counter, perhaps in the form of cheap goods produced in labor camps? Or is this freedom for sale to the highest bidder?  Such goods were available in the former German Democratic Republic [communist-ruled], if one had connections to the store owner who would bend under the store counter and retrieve the desired merchandise, but only in exchange for Western currency.

Human Rights Watch reported further on July 7, 2008, "China threatened the media to limit their entry into china unless they comply with the official constraints. When a foreign media outlet openly complained about harassment and curtailing of freedom in Anhui Province, a functionary from the Chinese Foreign Ministry let it be known that this organization's accreditation for the games might be in jeopardy."

Professor Jiao Guobiao, a publicist, told this newspaper in 2006, "One can tell that the Party is involved in everything. They control all levels of every segment of society, the street committees, the neighborhoods, the universities; they control minority areas such as Tibet and Xinjiang—everything."

Asked about the mood of Chinese people in relation to the CCP he stated, "Though their strict control system is still very much in place, the consensus among the people about the system's legitimacy is simply negative."

China's best known attorney Gao Zhisheng said it most clearly, "The Chinese population recognizes only too well that the regime wants to achieve two goals with a successful Olympic event—first, to prove to the Chinese people that the world still considers the Party a legitimate regime, in spite of the tyranny and all their horrid crimes against humanity, that cost more than 80 million people their lives during the last few decades. Second, to show the world that the Party is still all-powerful over China and enjoys the full support of her people.” (From Gao Zhisheng's book Chinas' Hope, 2008)

Gao Zhisheng never knuckled under or kow-towed. He courageously endures defamation, incarceration, torture, prohibition to practice his profession, and house arrest, for himself and his family, because he is a friend of China, and not a friend to dictators.

Twisting the Facts and Lies

The self-appointed Chinese regime, not sanctioned by the populace, promised the IOC in 2001 to consider the right to freedom of expression a top priority. "Man has to admit that twisting the facts and telling half-truths and lies are not an invention of the CCP but are age-old vices the CCP is using shamelessly." That is a comment from the book Nine Commentaries on the Communist Party, in the introduction. "The CCP promised land to the farmers; ample factory jobs for the workers; freedom for the intellectuals and freedom and democracy for all. None of these promises were realized. One generation of Chinese died with bitter disappointment, and the next generation is being cheated, as usual. This is China's greatest tragedy, and the nation's misfortune."

If Not Now, When?

What politicians, sports functionaries, and the media neglected to accomplish in a timely manner rests now on the shoulders of the athletes, common citizens and journalists—to expose China's illegitimate systems and her methods and tactics.

Elvis Stojko had these words during a mid-May Human Rights Torch event in Toronto's Queen's Park,

" The Olympic Games are a wake-up call and an opportunity for China to move on. The dark Middle Ages are past. We don't want to sit back and say two years down the road that we should have done something; we should have affected something."