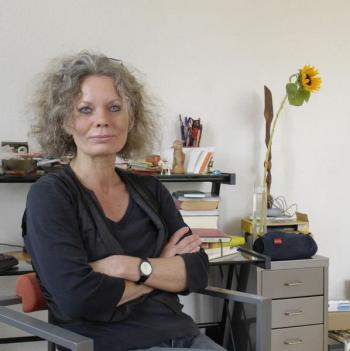 Grit Hartman is a freelance journalist who writes reviews and articles for the German Dresdner Neueste Nachrichten Online and others. Hartmann is also the author of several books, including Operation 2012: Leipzig German Olympic Games—2004 and Golden Children—The German Democratic Republic Seen in view of Sports Achievements—1997.

ET: Mrs. Hartmann, the Beijing Games' motto was "One World, one Dream." According to you, have the games united the world? And whose dream has been fulfilled?

GRIT: The games have undoubtedly united the Chinese CCP bosses and the International Olympic Committee. Those who were unaware will now know that the IOC actually is: a system that dismisses democratic values, an outright commercial enterprise that has usurped an idea to take advantage of the commercial interests at stake. We have witnessed these fakeries and deceptions this clique has presented: the sham opening ceremony; the sham "demonstration parks" where people [who had believed they could voice their concerns] were arrested.

I found the transparency of this deception particularly frightening, as I did the CCP and the IOC's willingness to celebrate this peep show as "The Athlete's Games," or as a "Harmonious Event." Such was the quality of the Beijing Games. It had nothing to do with a dream, but merely with an illusion of fair play and harmony to dupe viewers and rake in money.

ET: Did it work? And has the Chinese leaders' image improved in the eyes of the international community?

GRIT: The numbers of German TV viewers watching the Beijing games were considerably lower than those during the Athens games. According to one poll, half of the German viewers are disgruntled and think the world records are manipulated.
As far as China is concerned: there is a difference between the citizenry—their friendliness and openness as opposed to the regime's demeanor. Many have realized that China's economic upturn is not happening in a vacuum, and that it is separated from the political system, but that the police state is behind all this and is a prerequisite for these advances. That is based on the exploitation of resources and the suppression/oppression of those who refuse to toe the Party line.

No, the CCP cannot in good conscience say they had won these games. It was a disaster abroad—even though it will be business as usual, because Western enterprises and politicians act without ethics. That was the other disaster for all who had hoped for an opening of China.

ET: China has won the most gold medals. Their teams practicing traditional sports such as gymnastics, table tennis and diving competitions were successful, likewise in weight lifting. In which other sports category have the Chinese shown the most progress, and, according to you, what could be the reason?

GRIT: Weight lifting has traditionally been a doping-besmirched power sport worldwide! The Chinese had garnered eight gold medals in the eight classes they qualified for. In swimming they got gold and silver "over 200 Delphin," while the winner Liu Zige bettered her time by 4 seconds. Those accomplishments are unrealistic, regardless of whether they were achieved by Chinese or other athletes.

The Chinese bettered their time in rowing, also a type of sport that requires primarily strength and endurance. Tests for most prohibited substances do not exist. And China had prepared for the games at home and invested immensely. They bought foreign trainers, even a doping trainer from the former East Germany (DDR)—all part of "Project 119," so named after the 119 gold medals in the core sports.

Additionally, the elite sports were for years under the influence of the provincial competitions. For the Games they were centralized, as was the handling of the athletes at the Beijing Sports Medicine Clinic.

Since then no information of Chinese doping incidents were publicized. I believe they are more discreet with their doping—like the rest of the sports world.

ET: What stories can we glean that lie behind the many gold medals awarded the Chinese?

GRIT: Perhaps judo-winner Xian Dongmei's story. After winning the gold, she looks forward to meeting her two-year-old son again. Because of her required presence in the training camp, her only contact with him for a whole year was via web cam.

Or perhaps the athletes who said the four years of daily eight hours of training were worth it, because of the financial payoffs. That speaks of drills that would be impossible to carry out in Germany.

Another point: More than half the medals went to women. They are more willing to eat bitterness. The functionaries exploit that and had invested millions in women's judo and wrestling.

One story chronicles Liu Xiang's quitting—how much immense pressure these athletes are under when they are compelled to validate the strength of a political system—that of their whole nation. That makes human beings a human commodity.

GRIT: Olympic successes tell nothing of a political system's worth, and say nothing about anything we consider democratic or humane. But this antiquated view also persists in the West—that a nation shows its progress through the [number of] medals it has earned.

Politicians everywhere adorn themselves in the company of shining sports heroes. We have a precedent in the former DDR [former East German regime], a sports super power, but only because they had organized the perfect sham—doping according to a state plan.

These days it looks more like a competition between the Chinese-organized state sport and college sports in the USA, but in actuality, the competition lies within which political system is able to stage the biggest deception. Who knows how well the U.S. sprinters had faired had doping cheater Marion Jones not been incarcerated.

ET: German officials have discussed for years the possibility of centralizing sports more. What do you think of this?

GRIT: Nothing! Democracy means competition with alternative concepts. Besides, it is an illusion to think additional centralization and technology during sham Olympic sports competitions affords "cleaner" results. German functionaries are at the moment demanding more money for top sports. Two-thirds of Germans are against that. It would be the civilized thing to say, " We are saying good-bye to this circus; let it finance itself through advertising." But German politicians are dumber than the citizenry.

ET: Does performance have anything to do with "Breitensport" [literally “popular sports” in German] any longer? Do you think the Olympics are an impetus for "Breitensport" in China?

GRIT: Those days are over, even in Western nations. No normal human being can see himself as an Olympic hero like Phelps who knows no defeat. Those figures hail from another world, from computer games, fascinating in their horror.

Highly accomplished sports results belong to an ever more specialized category, similar to systems of deception. It had never been different in China. Will that change? Why should the CCP, always acting pragmatically, change something that in their eyes is successful?

I have not heard a single word from the CCP regime for plans to invest in and build sports facilities for the common people.