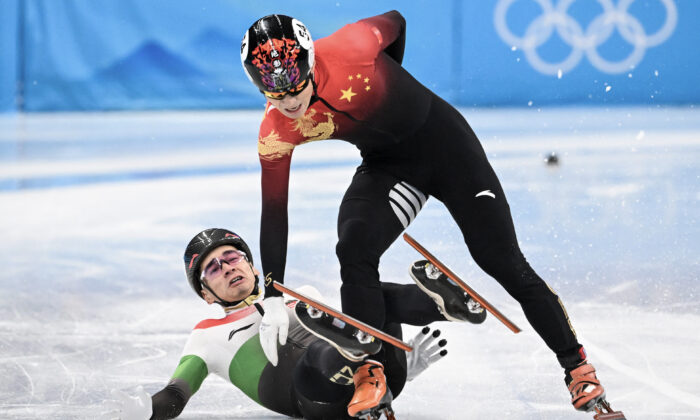 Hungary's Shaolin Sandor Liu (L) falls next to China's Ren Ziwei after crossing the finish line in the final A of the men's 1,000-meter short track speed skating event during the Beijing 2022 Winter Olympic Games at the Capital Indoor Stadium on Feb. 7, 2022. (Anne-Christine Poujoulat/AFP via Getty Images)
Beijing 2022 Olympics

China’s quest for gold medals at the Beijing Winter Olympic Games has been one filled with drama.

Two out of three gold medals so far have come from short track speed skating. Both wins came about from post-race reviews in favor of China, sparking protest from aggrieved parties, as well as accusations of referee favoritism for the host country.

Over the weekend, China came in last place during the mixed relay semifinals and would have missed the final altogether. The Chinese players only advanced after the United States and Russia, after finishing in second and third place respectively during the semifinal, were disqualified for obstruction after a lengthy official review, leaving the teams to unpack what had happened.

“The call came to me on what I did,” said U.S. skater Ryan Pivirotto, who was identified as being responsible for the infraction. A skating official said Piviorotto had illegally crossed into the track from the infield while preparing to tap on, blocking a Chinese skater.

“I don’t even know really what I did, because there was no contact,” Piviorotto said.

​​South Korean speed skater Kwak Yoon-gy, who watched the race, said he found it difficult to accept the call to penalize the two countries but leave China off the hook.

“Looking at the way China won the gold medal, I felt bad that my younger teammates had to watch something like that,” the 32-year-old told Seoul-based Yonhap News Agency. “I thought to myself: ‘Is this really what winning a gold medal is all about?’ Things all just felt very hollow.”

Kwak suggested that China had received favorable treatment as the host country.

“If it had been any other country than China in that situation, I wondered if that team would still have been allowed to reach the final like that?” he said, noting that he was left with a sense of injustice. “I felt that could have been us at the wrong end of all this. I thought about how upsetting and frustrating it would have been if we’d been a part of that.”

‘This Is a Parody’

Outrage and confusion have arisen amid accusations that the Winter Olympics host country, China, has been gaining an advantage from rulings that have booted a spate of top Olympic contenders out of the competition.

In the mixed ski jumping event, five female skiers representing Austria, Japan, Norway, and Germany were ousted on Feb. 8 for wearing suits that were deemed loose-fitting and capable of giving them extra loft while in the air, even though the suits had been cleared in earlier outings. The four countries had claimed all 15 available medals in the event over the past four world championships since 2013.

“This is a parody, but I am not laughing,” Germany’s head of Nordic events Horst Huttel said. “It is outrageous that this happens with the four biggest ski-jump nations.”

South Korea was in an uproar after two of its racers were disqualified during the men’s 1,000-meter short track semifinals on Feb. 7, an event where Chinese athletes ultimately bagged gold and silver after a post-race review.

During the semifinals, South Korea’s world record holder, Hwang Dae-heon, was the first to cross the finish line. He was then knocked out with his teammate—allowing Chinese skaters into the final—after referees determined that they had made an “illegal late pass” and a lane change, both causing contact with another player.

In the finals, Hungary’s Shaolin Sandor Liu initially looked like the champion after crossing the blue finish line just before Chinese contender Ren Ziwei. Video footage shows that at one point, Ren appeared to stretch his arm over Liu’s body, causing Liu to fall.

After a video review, the referees gave the Hungarian skater two penalties, one for “lane changing causing contact,” and a yellow card, handing the victory to Ren.

“I don’t think there is any question or doubt. Everyone earned it,” Ren’s compatriot Li Wenlong, who was promoted to second place, said of the controversy.

Short track teams from South Korea and Hungary lodged complaints with the International Skating Union chief referee over the ruling. Both were rejected. The Union said all disqualification decisions are final and that the chief referee stood by his final decisions upon reviewing the incident once more.

For the first time in 18 years, South Korea is taking the case to the top sports adjudicating body, the Court of Arbitration for Sport.

“We will explore all available ways and means to ensure that such an unfair judgment will not be made again,” Yoon Hong-geun, chairman of the Korea Skating Union, said in a Feb. 8 televised press conference in Beijing.

He noted that the home advantage had “partly worked” in China’s favor.

Indignant South Korean sports officials and ordinary citizens have been calling for the country to pull out of the Olympics and bring its athletes home.

“We had so many phone calls coming in that we couldn’t sleep,” Yoon said, although he believes that they’re “not in that stage yet.”

In an apparent vent of anger, Seoul Shinmun, the country’s oldest daily newspaper, published an article consisting solely of the line “Just let host country China take away all the medals” repeated 10 times.

The public sentiment in the country was strong enough that the local Chinese Embassy broke its silence on Feb. 9. Describing the criticism as an attack on the country, it accused South Korea’s politicians and media outlets of “instigating anti-China sentiments” and “poisoning feelings between the two country’s people.”

Ren wasn’t the only Chinese athlete embroiled in controversy. In a separate speed skating event, Chinese player Fan Kexin seemed to have pushed a lane marker with her left hand into her Canadian opponent’s path, a slow-motion replay of the incident shows. The Canadian short tracker, Alyson Charles, stepped on the marker and spun out of control. Another Canadian skater was blamed for the fall that eliminated her from the race.

Things took a turn on Feb. 9, as Hwang took gold for South Korea while Ren, who was penalized for impeding, lost his hope of grabbing his third gold medal for China.