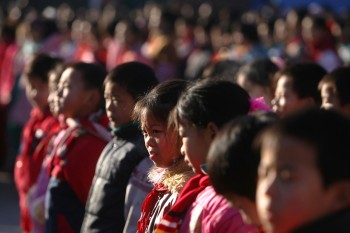 BEIJING, CHINA - DECEMBER 28: Students gather on the playground at Xingzhi Primary School, one of the largest migrant children's schools, on December 28, 2004 in Beijing, China. (Photo by Cancan Chu/Getty Images)
China

Beijing’s migrant population has swelled to over seven million and their children, lacking the correct credentials, find it hard to enroll in school.

Census data released on July 7 also showed that migrants account for a third of Bejing’s total population, and that the Chaoyang and Haidian districts, each with more than one million migrants, are where the largest number of migrants reside.

Within the migrant population, 73.9 percent are in the city for work or business purposes. Family members constitute 8 percent and 4.7 percent of the migrants are there for learning and training purposes.

A school in the Daxing district has decided to close down after realizing that 700 primary students are likely to be unable to continue their education, mainland media reported on July 5. The children’s parents hail from other provinces such as Anhui, Gansu, Henan, Shandong and Zhejiang. Since the parents do not have the necessary residence permit (“hukou”), the youngsters cannot attend state-run schools.

The school’s principal has said that some students and parents have not yet learned of the closing and are expecting to matriculate. However, the school’s landlord has decided to not renew the lease when it terminates.

New Century News reported on June 26 that, as of 2010, 30 percent of the students in Beijing do not have a household registration and cannot attend public schools during their years of compulsory education.

If these migrant workers want their children to attend public schools, they have to obtain a Beijing temporary resident certificate, certificate for employment in Beijing, and a certificate from the local town of the migrant worker showing that the student does not have a guardian registered locally.

With modern technology, the ancient system of family registration has made it easy for the Party-state to track its population. As state-owned enterprises were shut down during the recent period of “Socialism with Chinese Characteristics,” many migrants were forced to urban areas for employment. Chinese who live outside their officially sanctioned areas have little access to benefits and services and endure a lower level of socioeconomic status.